USA: The sheriff of a Texas county where 53 illegal aliens were found dead in a truck during a fatal people smuggling operation in June has opened an investigation into the 48 asylum seeking illegal immigrants flown from Florida to Martha’s Vineyard.

Bexar County Sheriff Javier Salazar said the investigation will look into the suspected activities of a Venezuelan being paid a “bird dog fee to recruit” the illegal immigrants from an area around a San Antonio migrant resource center to go to Florida.

“As we understand it, 48 migrants were lured—and I will use the word ‘lured’—under false pretences into staying at a hotel for a couple of days,” Salazar said at a press conference.

“At a certain point they were shuttled to an airplane where they were flown to Florida and eventually flown to Martha’s Vineyard, again under false pretences, is the information that we have,” he added.

Salazar said that on the promise of work and further assistance they were taken to Martha’s Vineyard “for little more than a photo op, video op” and “unceremoniously stranded” there.

Bexar County Sheriff’s Office said on Twitter it is working with private attorneys for the victims and advocacy organizations as part of its investigation, as well as getting ready to cooperate with federal agencies which have concurrent jurisdiction.

Further, she asserted that foreign nationals are being “enticed to cross the border” into the United States.

“Unless the [Massachusetts] national guard has abandoned these individuals, they have been provided accommodations, sustenance, clothing, and more options to succeed following their unfair enticement into the United States, unlike the 53 immigrants who died in a truck found abandoned in Bexar County this June,” she said in further comments obtained by The Hill.

On Friday, DeSantis said redirecting the illegal immigrants to Martha’s Vineyard, a self-proclaimed sanctuary jurisdiction, was a move to protect Florida from the “reckless border policies” of President Joe Biden.

“At the end of the day, this is a massive policy failure by the president. This is a massive and intentional policy that is causing [a] huge amount of damage all across the country and it’s all rooted in a failure to take care that the laws are faithfully executed, and to fulfill his oath of office,” DeSantis said at a press conference.

DeSantis said the Biden administration and the Democrats should stop worrying “about a bunch of rich people” in Martha’s Vineyard, who had already bussed the immigrants elsewhere within 48 hours and focus on the illegal immigration crisis at the southern border.

More than 7,900 illegal immigrants have been bused from Texas to Washington, D.C. since April and over 2,200 to New York City since August, and 300 to Chicago, according to the office of Gov. Greg Abbott.

Texas authorities have also seized over 340.5 million lethal doses of fentanyl which “would have otherwise made their way into communities across Texas and the nation due to President Biden’s open border policies,” according to Abbott’s office. 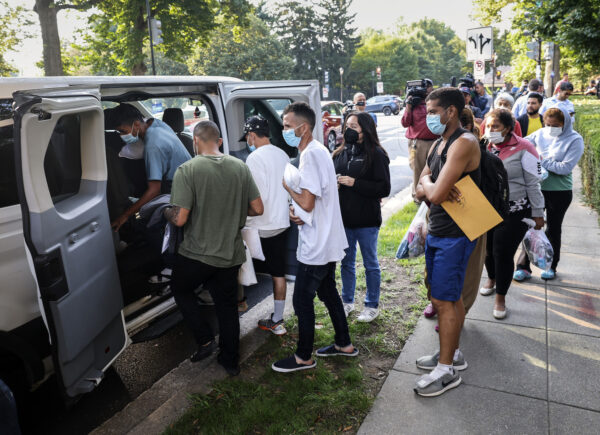 Illegal immigrants from Central and South America load into vans near the residence of Vice President Kamala Harris after being dropped off in Washington, D.C., on Sept. 15, 2022. (Kevin Dietsch/Getty Images)

CBP Encounters With Illegal Aliens Up 2.2 Percent in August

The number of illegal immigrants encountered nationwide by U.S. Customs and Border Protection (CBP) increased 2.2 percent in August, to more than nearly 158,000 unique enforcement encounters, according to the federal agency.

“Failing communist regimes in Venezuela, Nicaragua, and Cuba are driving a new wave of migration across the Western Hemisphere, including the recent increase in encounters at the southwest U.S. border,” CBP Commissioner Chris Magnus said in a statement.

“Our dedicated teams of skilled agents continue to work around the clock to secure our border and safely and humanely process and vet every individual encountered, but those fleeing repressive regimes pose significant challenges for processing and removal.”

Magnus said the number of illegal immigrants entering from Mexico and northern Central America decreased for the third consecutive month. The agency attributed that to efforts by the Biden administration to “address the root causes of migration.”

“More individuals encountered at the border without a legal basis to remain will be expelled or removed this year than any prior year,” Magnus said.