Tolo added that, according to Taliban sources, Ghani had agreed to a formal resignation. Ghani reportedly took his top aides with him.

Reuters reported on Sunday the Taliban were still working to confirm Ghani’s whereabouts as of press time. Ghani’s office declined to comment on his apparent abandonment of the nation, refusing to “say anything about Ashraf Ghani’s movement for security reasons.” The outlet suggested he was bound for neighboring Tajikistan, like many Afghan troops fleeing the battlefield.

Taliban insurgents add the capitals of Herat, Kandahar, Badghis, and Helmand provinces to their string of conquests in about 12 hours. https://t.co/dkYihXOxGm

Ghani has served as president since 2014.

Ghani appeared before the nation in a pre-recorded speech on Saturday claiming that he was working to “remobilize” the Afghan military to fight the Taliban.

“Under the current situation, remobilizing of the security and defense forces is our top priority and required measures are underway for this purpose,” Ghani said, vowing to work to prevent “further killings, loss of the gains of the last 20 years, destruction of public property and continued instability.”

Ghani’s reported flight follows the Taliban reconquest of many of the nation’s major cities, including Herat and Kandahar. While Kabul has yet to fall, American forces and those of allied nations are scrambling to evacuate their civilian personnel, expecting the Taliban to claim the city at any time.

The Taliban on Sunday claimed it had no plans to seize Kabul “by force.” Reports did indicate it had claimed control of Jalalabad, the last major city in government control other than Kabul.

Biden touted the strength of the Afghan military in July, claiming the nation’s fall to the Taliban was “not inevitable” and explicitly denying the U.S. would evacuate in extreme haste under military pressure as it did in Saigon during the Vietnam War.

“The Taliban is not the North Vietnamese army,” Biden said. “They’re not remotely comparable in terms of capability.”

“There’s going to be no circumstance where you are going to see people being lifted off the roof of an embassy of the United States from Afghanistan,” he added. “It is not at all comparable.”

Helicopters airlifted American embassy personnel from the U.S. embassy in Kabul on Sunday morning as the Taliban terrorists entered the city’s outlying districts. 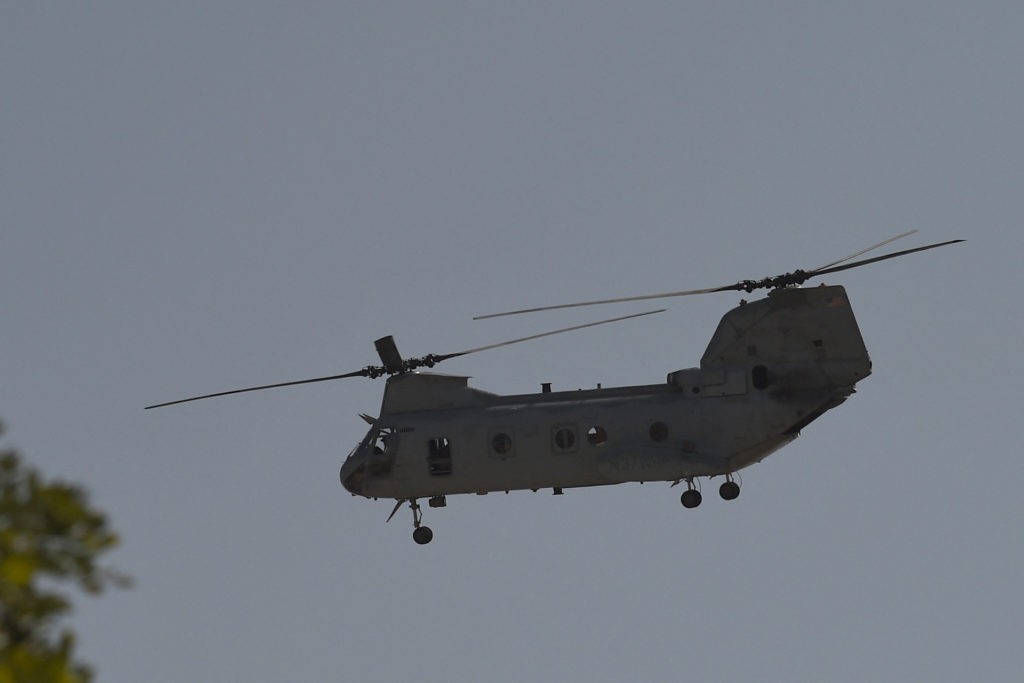 A U.S. military helicopter is pictured flying near the U.S. embassy in Kabul on August 15, 2021. WAKIL KOHSAR/AFP via Getty Images)

The Taliban victory follows Biden breaking the peace deal former President Donald Trump negotiated with the jihadist organization. Under Trump’s terms, the U.S. would have withdrawn all of its combat personnel by May 1 of this year in exchange for the Taliban promising not to harbor terrorist groups like al Qaeda, to negotiate in good faith with Kabul, and to refrain from attacking U.S. forces as they left.

Biden announced in April he would extend the U.S. presence to September 11, 2021, the 2oth anniversary of the terrorist attacks that prompted the American invasion. He later advanced the withdrawal date to the end of August. The Taliban expressed outrage at the delay and indicated Biden’s actions released them from their commitments under the deal. The terrorist group’s crippling offensive against the Afghan government swiftly followed.

Mullah Baradar to Taliban: “we have reached a victory that we couldn’t imagine…we should show humility in front of Allah…now it’s time of test — now it’s about how we serve and secure our people, and ensure their future/good life to best of ability”

MASSIVE PROTESTS IN MONTREAL! - IS THERE A CANADIAN UPRISING? (VIDEO, 16 min)