After a massive 15 percentage point swing in the space of just two weeks and coinciding with the trucker revolt, the majority of Canadians now want all COVID rules to end.

A poll conducted by the Angus Reid Institute found that 54 per cent of Canadians agree “it’s time to end restrictions,” with the “strongly agree” category of answer rising by 11 points in just a fortnight.

The survey also revealed that a majority of people in every area apart from Atlantic Canada “feel the time is now to open things up.”

In Quebec, which has seen the introduction of some of the most overtly draconian COVID restrictions, 59 per cent want to see restrictions cancelled versus only 34% who are opposed.

“The lone majority-dissenting age and gender group on this question are women over the age of 54. At least half of other cohorts – led by 35- to 54-year-old men – say restrictions should end,” according to Angus Reid. 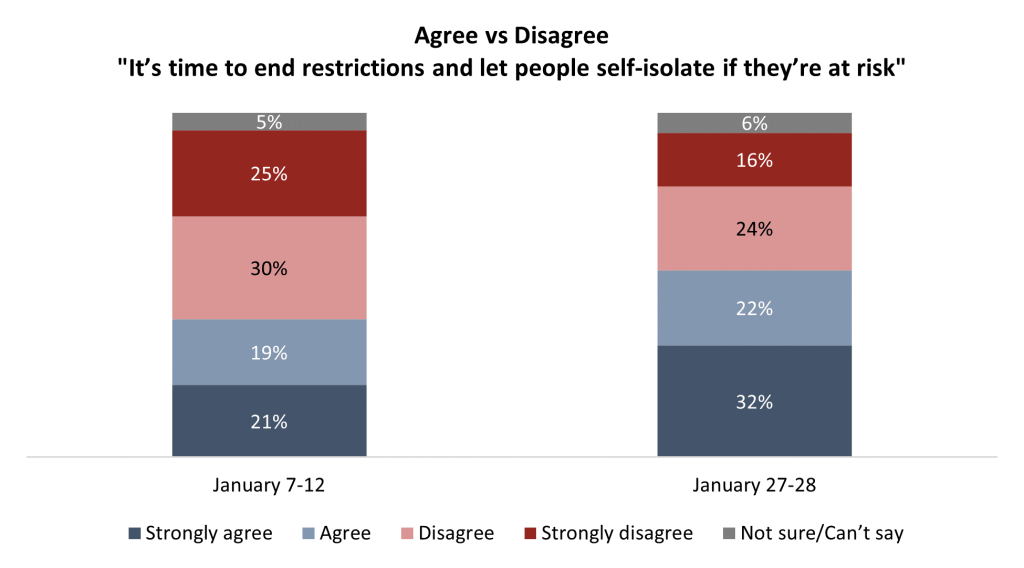 “The only demographic who want these restrictions to continue are elderly cat ladies who’ve swallowed the media’s propaganda and think they have a 50% or greater chance of being hospitalized if they catch this bug,” notes Chris Menahan.

The shift in sentiment has undoubtedly been driven by the success of the Freedom Convoy, who despite their vilification by the media and Prime Minister Justin Trudeau, have seen support for their demonstration grow.

Candice Bergen, deputy leader of the Conservative Party, countered Trudeau’s lurid efforts to portray the group as racists and homophobes by asserting they represented millions who “have had enough of lockdowns and broken promises”.

The protest began as a backlash to vaccine mandate rules that dictate truckers returning to Canada from the U.S. quarantine once they arrive at home.