in Main, Opinion, Politics & Government
Text Size: A A A
0

USA: Video footage captured thousands of empty and damages packages lined around the tracks of a Los Angeles railway in the midst of cargo looting crimes

As a result, they have left empty boxes scattered along the tracks as well as leaving behind dispensable products such as unused COVID tests and epi pens

Thousands of shredded packages were seen scattered along the tracks of a Los Angeles railway on Thursday, said to be left by thieves who are now looting cargo containers.

Video footage captured a series of packages that were either left empty or torn up along the Union Pacific tracks in the Lincoln Heights neighborhood of downtown Los Angeles.

The cargo packages have been bait for railway thieves who have targeted goods from companies such as Amazon and UPS bound for residences along the West Coast.

Products such as unused COVID tests, fishing lures and epi pens were seen scattered across the ground.

Cargo thieves have been stealing valuable items from these trains while they are either stopped or slowing down so they can be brought into the Union Pacific Intermodal facility in downtown LA, where the cargo is moved to a new mode of transportation.

To break into these containers, thieves will often use bolt cutters to break the locks and steal whatever they can get their hands on.

Scroll down for video 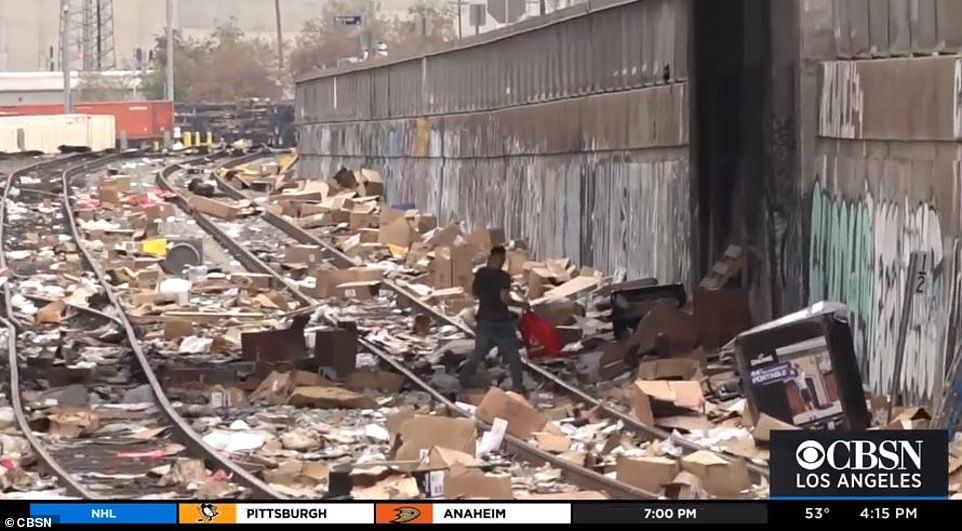 Thieves have been seen digging through the debris on a railroad in the Lincoln Heights neighborhood of downtown LA (Pictured: Man walks through thousands of packages carrying a red sack) 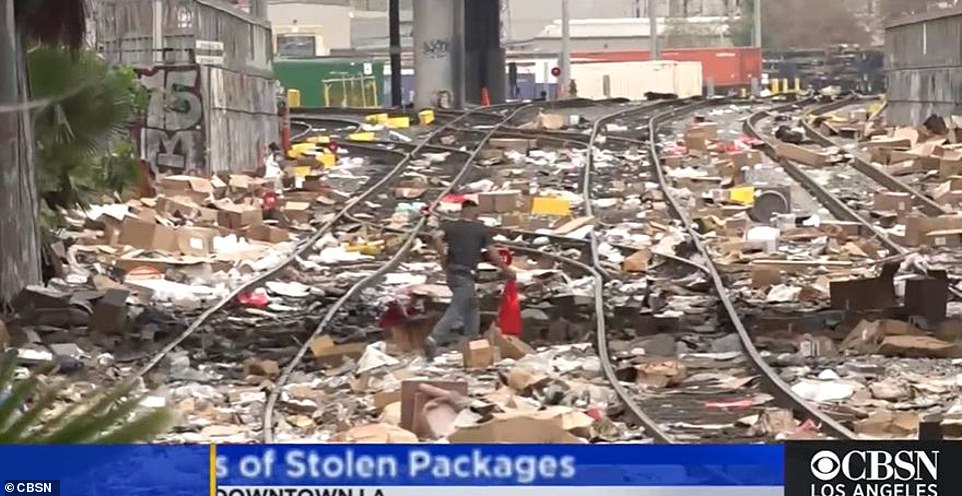 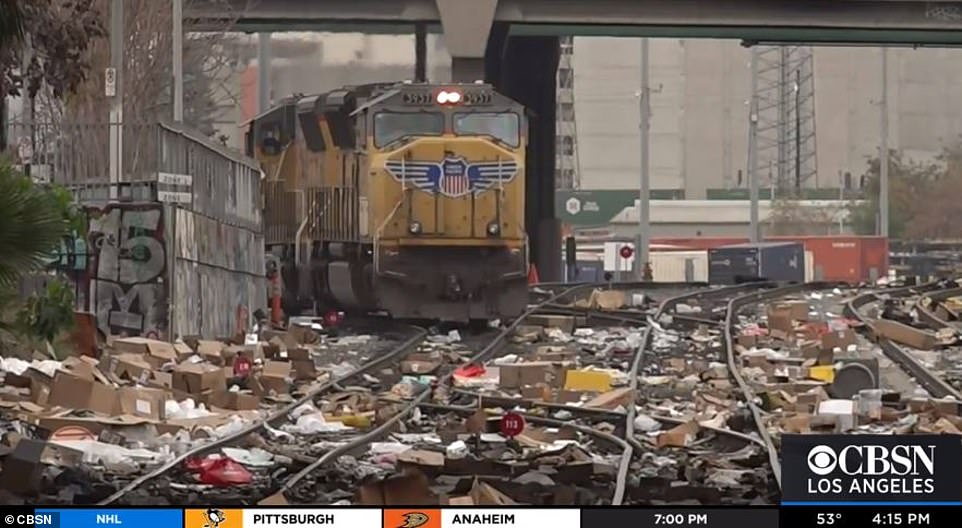 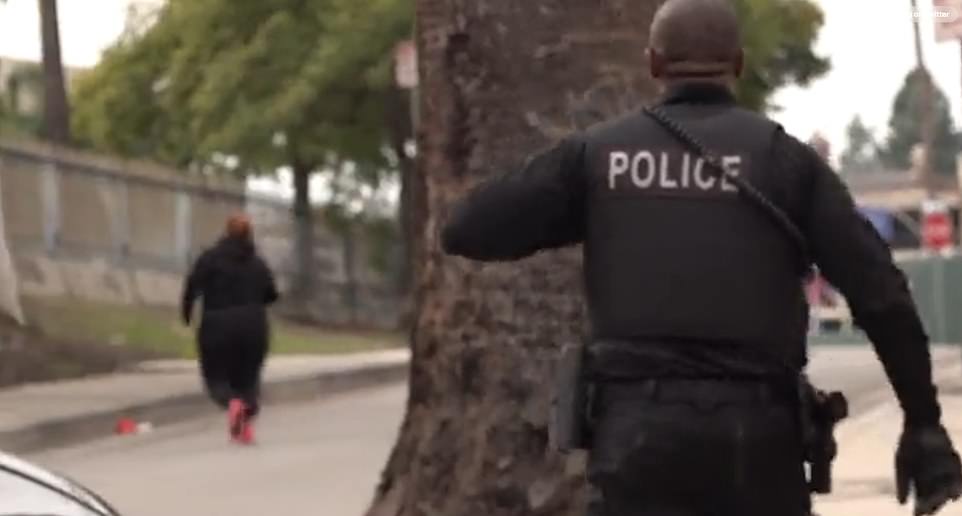 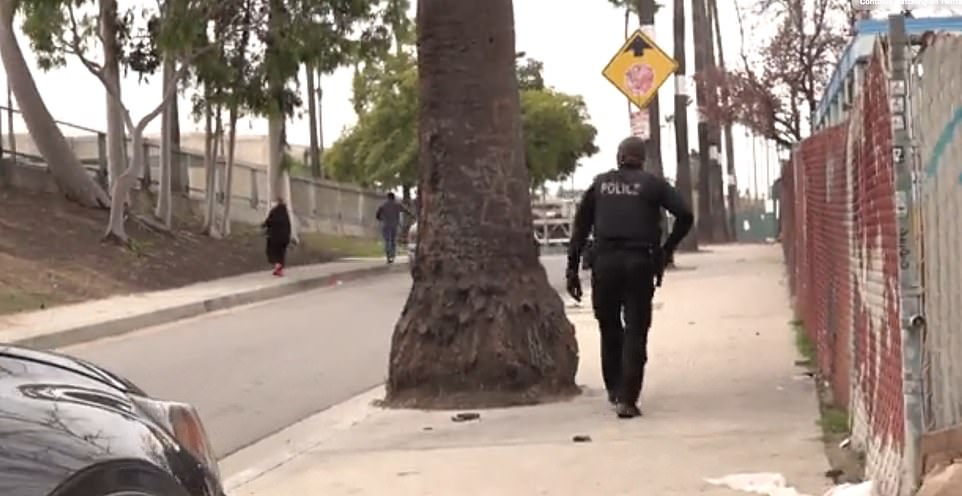 Cargo thieves have been stealing valuable items from these trains while they are either stopped or slowing down (Pictured: Police officer approaches two people who appear to be fleeing the area) 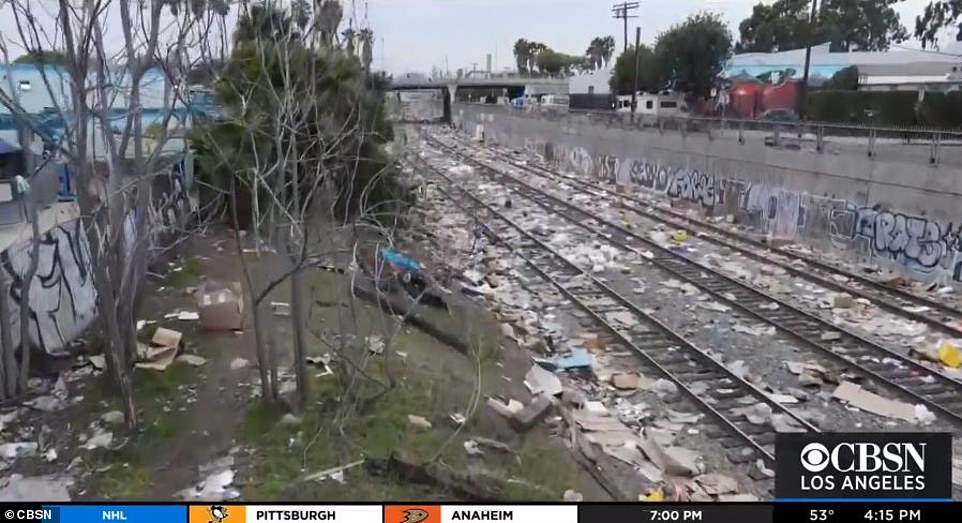 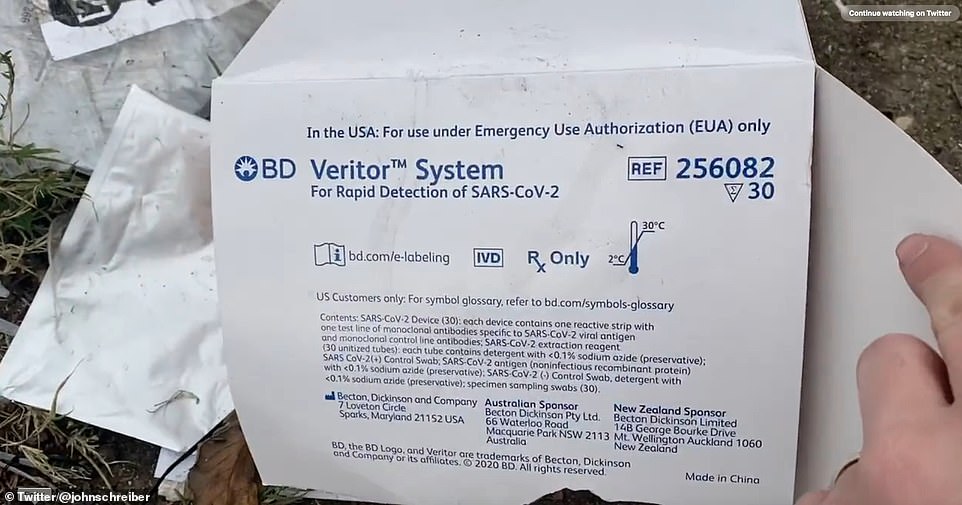 A local filmed himself picking up some of the items left strewn across the railway, including Covid tests (pictured) 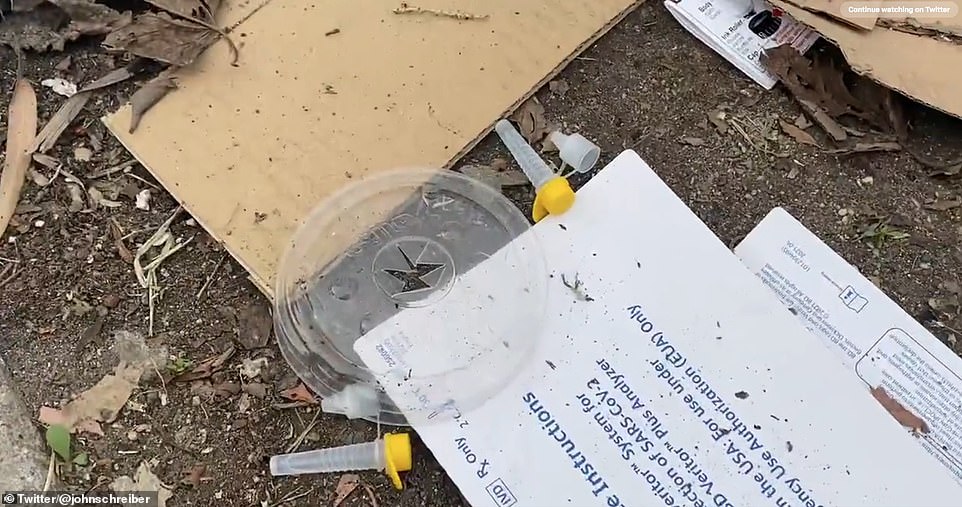 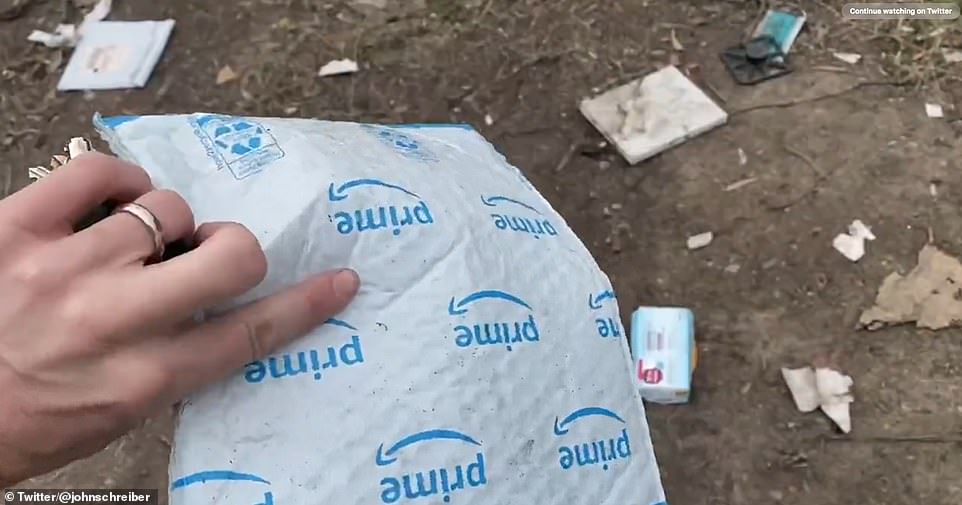 A man picks up an Amazon Prime parcel during a visit of the scene, which he filmed and shared to Twitter. A surgical mask and epi pen can be seen lying on the ground 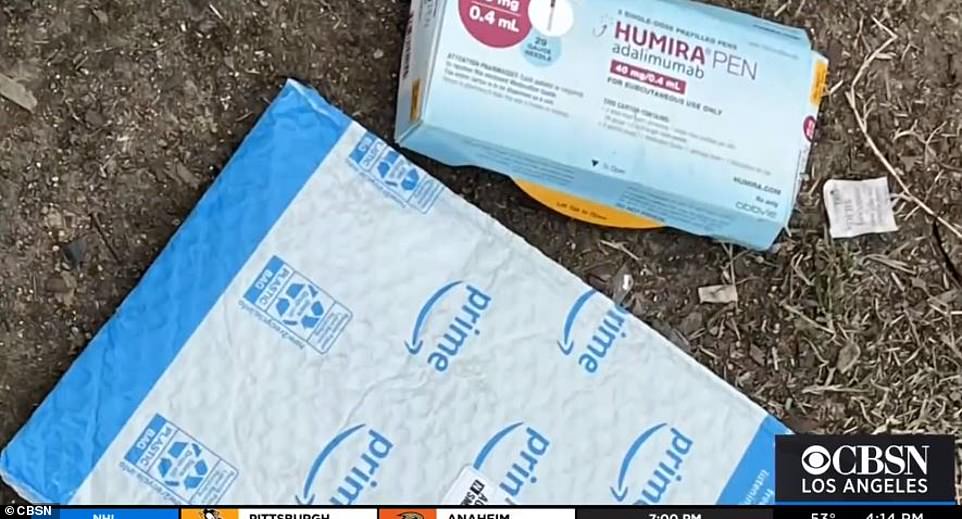 Empty shell packages and dispensable items such as unused COVID tests, fishing lures and epi pens were seen strewn around the tracks

Responsibility for policing the railroad right of way falls on Union Pacific Police… not local agencies like LAPD. We did see Union Pacific police chasing two people today off the tracks and keeping an eye on things. pic.twitter.com/M5aQSrkGZW

The debris littered along the railway tracks have reportedly been the result of recent burglaries, as employees with Union Pacific had cleaned the tracks just a month ago, according to a source with CBS LA.

Reports of thieves on the tracks have become quite common over the course of the last month with people also seen digging through the debris for items of value.

Despite the recent trend in cargo crime, the LAPD said that they do not respond to train thefts unless the freight company requests their help.

Union Pacific is taking matters into their own hands in an attempt to decrease theft on their tracks.

‘Union Pacific is very concerned about the increased cargo thefts in California, and we have taken several steps to address this criminal activity,’ the railroad company said in a statement.

‘These rail crimes pose a serious safety threat to the public, our employees and local law enforcement officers.

‘We have increased the number of Union Pacific special agents on patrol, and we have utilized and explored additional technologies to help us combat this criminal activity.

‘We also will continue to work with our local law enforcement partners and elected leaders.’

Keep hearing of train burglaries in LA on the scanner so went to #LincolnHeights to see it all. And… there’s looted packages as far as the eye can see. Amazon packages, @UPS boxes, unused Covid tests, fishing lures, epi pens. Cargo containers left busted open on trains. @CBSLA pic.twitter.com/JvNF4UVy2K 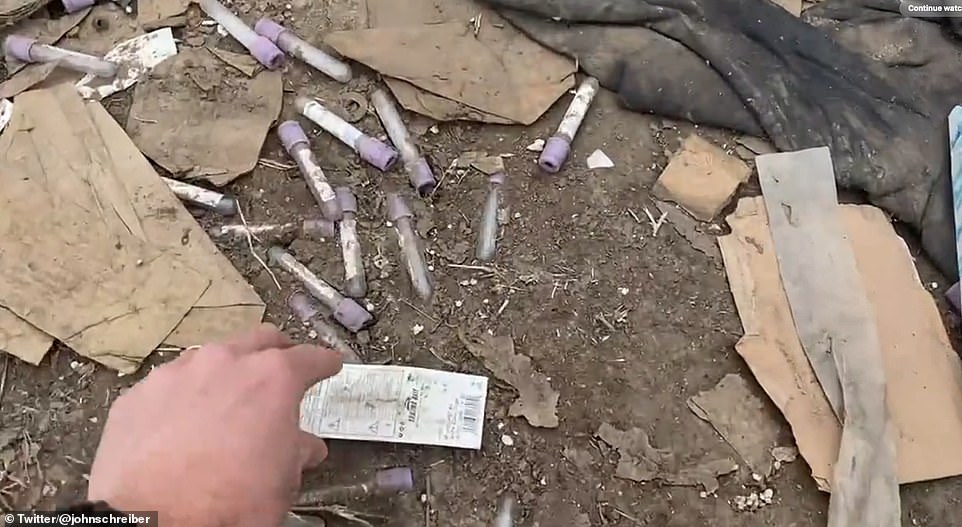 In other footage, medical vials can also be seen on the ground 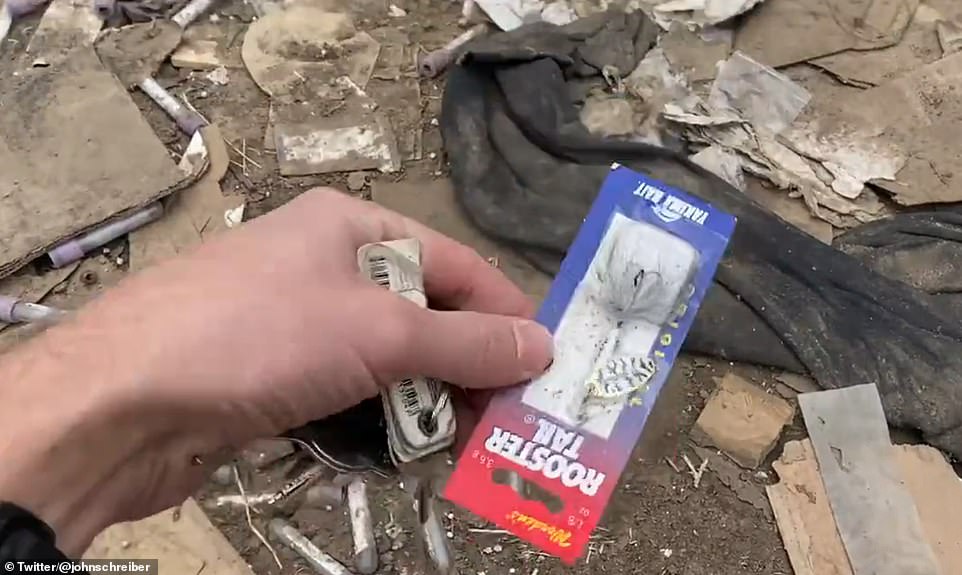 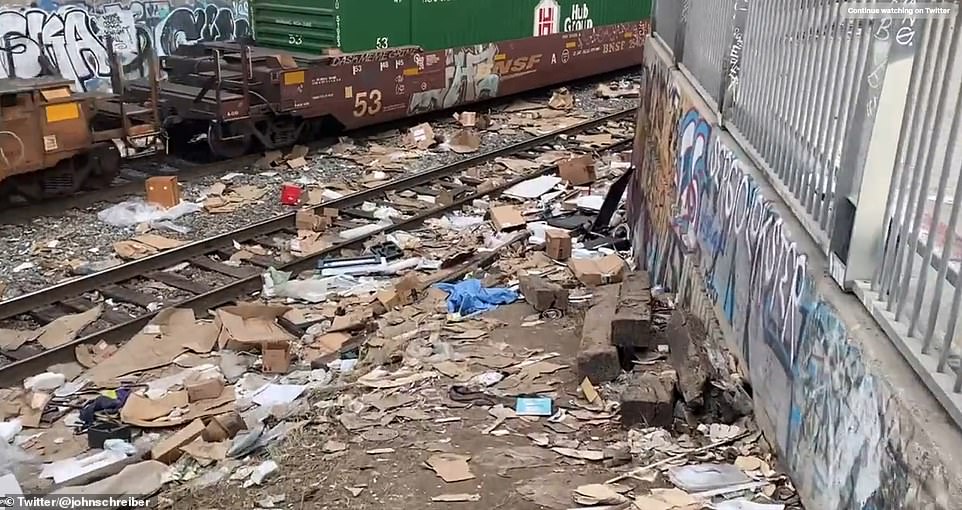 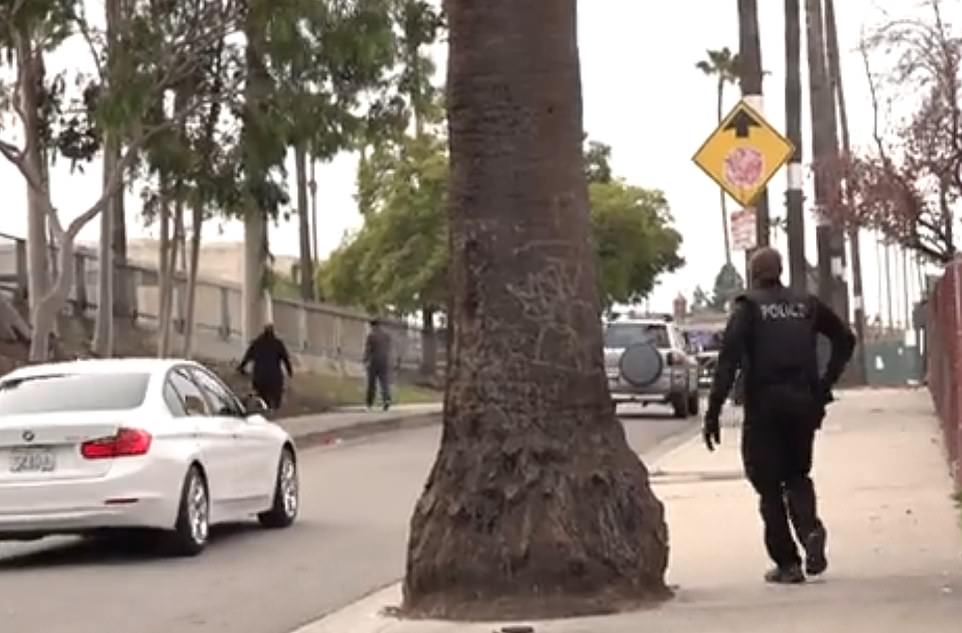 Cargo burglaries were also reported in November during the supply chain crisis period as trains en route to Los Angeles ports were being looted (Pictured: Two people appear to flee the area as police officer approaches) 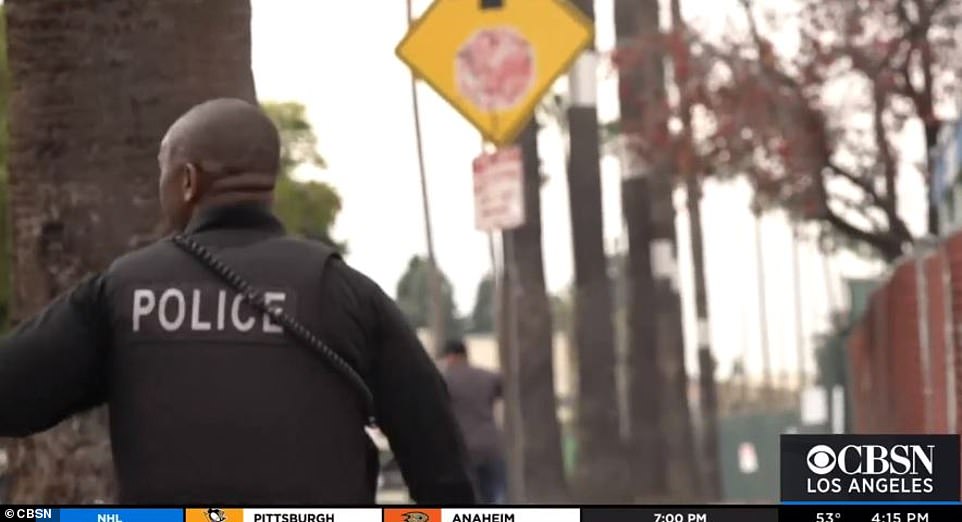 This is not the first instance where cargo containers have been targeted this year.

Cargo burglaries were also reported in November during the supply chain crisis period as trains en route to Los Angeles ports were being looted.

The cargo trains had traveled through an area of tracks that were lined with homeless encampments where thieves were reportedly cutting through the carts with bolt cutters.

Officials with the city then moved the shipping containers into vacant lots to prevent further thefts as a result.