Israel is Overrun With Covid. The Vaccines Have Failed. The Experiment Must Stop

IZRAEL: Israel has always been the most important country to judge the mRNA Covid vaccines.

It has nearly total adult vaccine coverage. Efforts to blame “the unvaccinated” for whatever is happening won’t hold. Israel has good data – far more complete and up-to-date than American figures. And it vaccinates quickly, so whatever impact the vaccines are having rolls through the population (and the data) quickly.

But most of all, Israel matters because Israel was first. It mass vaccinated with Pfizer’s mRNA first and it boosted first. And human biology is the same everywhere.

So what happens in Israel happens in all the other mRNA countries eventually. As the chief scientific officer of Pfizer said in September, Israel is a “sort of laboratory” for the vaccines.

Here’s how the Israeli experiment is going:

This chart tracks serious Covid cases (basically intensive care hospitalizations) in Israel from early 2020, the beginning of the epidemic: 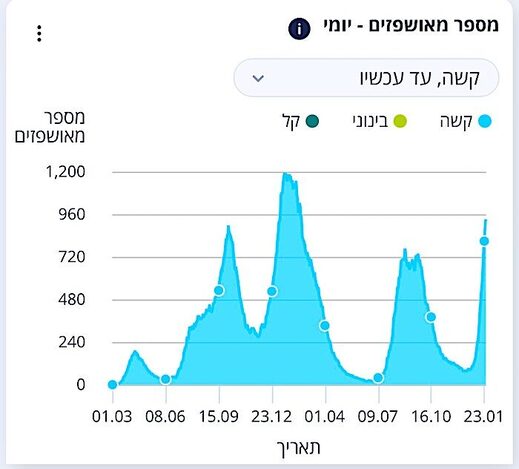 The United States has 36 times as many people as Israel, so 1,000 ICU patients translates into 36,000. Israel also has a relatively young population, meaning Covid will be less severe overall than in the US.

The chart shows five distinct Covid spikes. The first two are in 2020, in the pre-vaccine era.

The third spike, the middle one, is the largest so far. It took place from December 2020 through February 2021, just as mass vaccinations of the elderly began.

As I wrote at the time on Twitter, that link probably wasn’t a coincidence. Countries near Israel that were not vaccinating didn’t have spikes as severe. Britain, the second major country to start mass vaccinations, did. Later work has shown a marked rise in infections just after the first mRNA dose, probably because the vaccine temporarily reduces overall immunity to infection.

But even a couple really bad weeks is a small price to pay for long-run success.

What happened as the vaccination campaign progressed? 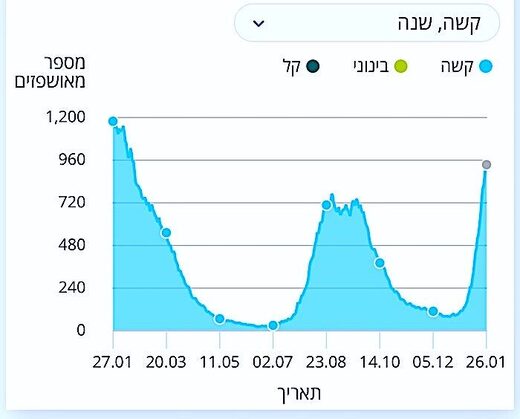 After January 2021, serious cases plunged, falling almost to zero by May – a total that included some unfortunate folks who’d been stuck on ventilators for months.

This was what I would later call the happy vaccine valley, that brief period when the vaccines appeared to work as advertised.

Vaccine advocates were overjoyed. They believed the vaccines would essentially end Covid. “Herd immunity” was in sight. 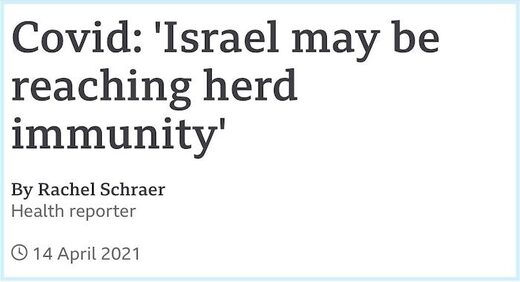 On May 20, Dr. Anthony Fauci told the Washington Post on May 20 he believed Covid could be eliminated in the United States – not merely controlled, but eliminated – if only enough people would be vaccinated.

Some people who are even more skeptical than I am will argue that the spring Israeli gains were largely seasonal and not vaccine-driven. I disagree. For most of May 2020, Israel reported fewer than 20 cases of coronavirus daily; I don’t think the decline was merely due to seasonality.

But it doesn’t matter.

The tragedy of the mRNA vaccines is not that they don’t work at all.

They do. For a couple months – four or five at most. And last spring, they gave the people who believed in them a glimpse of a world without Covid, a world in which dedicated researchers had destroyed drug industry skeptics like me and thrown the conspiracy theorists back in the basement.

Our immune systems cleared out the anti-spike protein antibodies that the mRNA vaccines had forced them to make; and the vaccines did not produce the same long-term immunological improvements that natural infection and recovery from Covid cause.

Once the antibodies disappeared, the protection did too.

By July, new infections in Israel were soaring. By August, serious cases were soaring too. (The late summer 2021 spike is the fourth one on the top chart.)

The overall population-level numbers are what matter. Israeli health experts knew. “This is a very clear warning sign for the rest of the world,” one told Science magazine on August 15.

At this point public health authorities and governments in Israel and everywhere else had a choice.

They could admit that the mRNA vaccines were failing – that their protection was dropping and would continue to drop – and that the world would have to live with Covid for the foreseeable future.

Or they could double down and offer a third “booster” dose of mRNA – a dose that had not been given in the large clinical trials in 2020 from Pfizer and Moderna that had led them to authorize use of the vaccines.

Very preliminary clinical trial data suggested that a third dose would increase anti-spike-protein antibodies – temporarily. But no one could know whether it would produce long-term immunity. And the fact that original two-dose regimen had not done so should have been an enormous warning sign.

But political imperatives and an unwillingness to admit error took over.

At this point the story turns dark.

The best – best! – possible interpretation of the press for boosters is that the vaccine advocates chose to “believe” in the vaccines, in the absence of any long-term safety or efficacy data on a third dose. But faith is not science. And by plenty of experts – including two of the Food and Drug Administration’s top vaccine regulators – openly questioned the plans to offer a third dose widely.

No matter. On Sept. 2, Fauci said at a White House briefing that he expected three doses would do the job where two had not.

“I must say, from my own experience as an immunologist, I would not at all be surprised that the adequate, full regimen for vaccination will likely be three doses… we have good reason to believe — that that only will not be a strong response, but that it will actually be durable.” 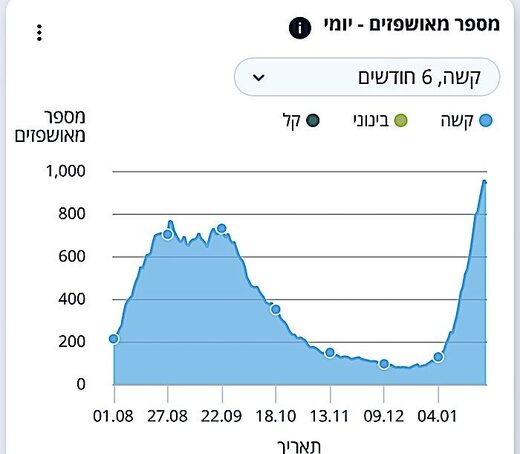 Cases dropped again. But this time they didn’t get almost to zero, as they had in late spring; and the vaccine valley was even shorter. A third dose was LESS, not more, effective than the original regimen. And the lack of effectiveness occurred even though the vaccines produce a larger number of antibodies at the peak following the third dose than they do after the second.

But this time it wasn’t just human biology working against the vaccines. Sars-Cov-2 gets a vote too. And Sars-Cov-2 had mutated in a way to make the vaccines much less effective.

As a result, Omicron infections in Israel have reached levels that no nation in the world (aside from a couple of other equally highly vaccinated countries) have ever seen. Even though Omicron is not as dangerous as earlier variants, the total caseload is so high that the hospitals are once again filling. 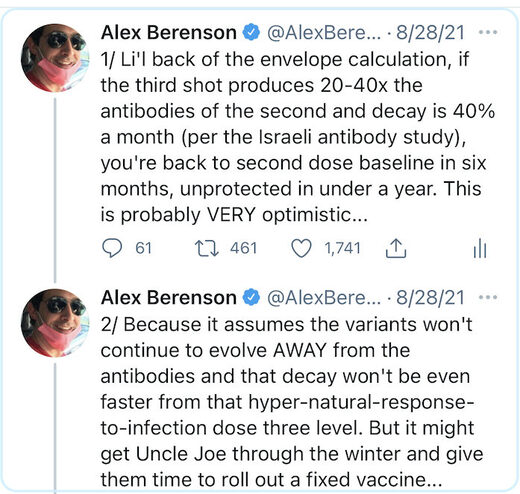 Other highly vaccinated and boosted countries are a few weeks behind, and their boosted patients may still have some partial protection against severe disease and death. (People who received two doses last winter or spring probably have none at this point, if the data out of Scotland and the United Kingdom are to be believed.)

But that won’t last. The Israeli experience this month could not be clearer. A third dose does not provide long-term protection. When it fails, the boomerang effect is severe. Hospitals come under even more pressure than they would in a “natural” Covid wave, because the vaccine failure is highly synchronized – everyone becomes exposed at once.

And so – insanity upon insanity – the Israelis are offering a fourth dose.

Why would anyone believe at this point that a fourth dose will help for more than a couple of weeks? Not months, weeks. The trend line was obvious even BEFORE Omicron arrived; and Omicron drives vaccine efficacy down even more quickly. In countries with good data, vaccinated people actually are more likely to be infected than the unvaccinated.

Further, a fourth dose is likely to have MORE severe side effects – remember, the second and third doses produce notably increasing levels of heart inflammation in men, and mRNA therapeutics were repurposed as vaccines because of problems with toxicity after repeated dosing.

The vaccines have been proven ineffective for more than a few months against the wild-type virus. They appear to have negative efficacy against Omicron.

Forget all the black swans. Forget Marek’s. Forget antibody-dependent enhancement. Forget the strange rise in all-cause deaths last fall in highly vaccinated countries (which mercifully, seems to have stopped in the United Kingdom in the last couple of weeks – though that easing raises even more questions about why it happened at all). Forget the risk of long-term immunocompromise that might lead vaccinated people to be at higher risk for future Covid infections. Forget the nearly one million side effect reports now in the federal Vaccine Adverse Events Reporting System.

Judged SOLELY on the basis of the last year’s efficacy data, the mRNA vaccines are a failed product and should be withdrawn. Any future mRNA vaccines – against the Omicron variant or any other target- need to be tested for safety and efficacy in large-scale clinical trial for YEARS. Not months, years. This kind of billion-person experiment must never happen again.

It’s over, okay? We didn’t get the Hollywood ending. ‘Science’ didn’t win.

Dr. Carrie Madej – Covid mRNA Vaccines altering our DNA – and what is ‘Luciferase’