in Crime - Terrorism - Corruption, Economy - Business - Finance, Main
Text Size: A A A
0

Most people are bewildered by what is a global energy crisis, with prices for oil, gas and coal simultaneously soaring and even forcing closure of major industrial plants such as chemicals or aluminum or steel. The Biden Administration and EU have insisted that all is because of Putin and Russia’s military actions in Ukraine. This is not the case. The energy crisis is a long-planned strategy of western corporate and political circles to dismantle industrial economies in the name of a dystopian Green Agenda. That has its roots in the period years well before February 2022, when Russia launched its military action in Ukraine.

In January, 2020  on the eve of the economically and socially devastating covid lockdowns, the CEO of the world’s largest investment fund, Larry Fink of Blackrock, issued a letter to Wall Street colleagues and corporate CEOs on the future of investment flows. In the document, modestly titled “A Fundamental Reshaping of Finance”, Fink, who manages the world’s largest investment fund with some $7 trillion then under management, announced a radical departure for corporate investment. Money would “go green.” In his closely-followed 2020 letter Fink declared,

“In the near future – and sooner than most anticipate – there will be a significant re-allocation of capital…Climate risk is investment risk.” Further he stated, “Every government, company, and shareholder must confront climate change.” [i]

In a separate letter to Blackrock investor clients, Fink delivered the new agenda for capital investing. He declared that Blackrock will exit certain high-carbon investments such as coal, the largest source of electricity for the USA and many other countries. He added that Blackrock would screen new investment in oil, gas and coal to determine their adherence to the UN Agenda 2030 “sustainability.”

Fink made clear the world’s largest fund would begin to disinvest in oil, gas and coal.  “Over time,” Fink wrote, “companies and governments that do not respond to stakeholders and address sustainability risks will encounter growing skepticism from the markets, and in turn, a higher cost of capital.” He added that, “Climate change has become a defining factor in companies’ long-term prospects… we are on the edge of a fundamental reshaping of finance.” [ii]

From that point on the so-called ESG investing, penalizing CO2 emitting companies like ExxonMobil, has become all the fashion among hedge funds and Wall Street banks and investment funds including State Street and Vanguard. Such is the power of Blackrock. Fink was also able to get four new board members in ExxonMobil committed to end the company’s oil and gas business. 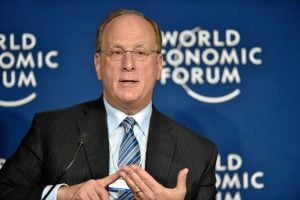 The January 2020 Fink letter was a declaration of war by big finance against the conventional energy industry. BlackRock was a founding member of the Task Force on Climate-related Financial Disclosures (the TCFD) and is a signatory of the UN PRI— Principles for Responsible Investing, a UN-supported network of investors pushing zero carbon investing using the highly-corrupt ESG criteria—Environmental, Social and Governance factors into investment decisions. There is no objective control over fake data for a company’s ESG. As well Blackrock signed the Vatican’s 2019 statement advocating carbon pricing regimes. BlackRock in 2020 also joined  Climate Action 100, a coalition of almost 400 investment managers  managing US$40 trillion.

With that fateful January 2020 CEO letter, Larry Fink set in motion a colossal disinvestment in the trillion-dollar global oil and gas sector. Notably, that same year BlackRock’s Fink was named to the Board of Trustees of Klaus Schwab’s dystopian World Economic Forum, the corporate and political nexus of the Zero Carbon UN Agenda 2030. In June 2019, the World Economic Forum and the United Nations signed a strategic partnership framework to accelerate the implementation of the 2030 Agenda.  WEF has a Strategic Intelligence platform which includes Agenda 2030’s 17 Sustainable Development Goals.

In his 2021 CEO letter, Fink doubled down on the attack on oil, gas and coal. “Given how central the energy transition will be to every company’s growth prospects, we are asking companies to disclose a plan for how their business model will be compatible with a net zero economy,” Fink wrote. Another BlackRock officer told a recent energy conference, “where BlackRock goes, others will follow.” [iii]

In just two years, by 2022 an estimated $1 trillion has exited investment in oil and gas exploration and development globally. Oil extraction is an expensive business and cut-off of external investment by BlackRock and other Wall Street investors spells the slow death of the industry.

Early in his then-lackluster Presidential bid, Biden had a closed door meeting in late 2019 with Fink who reportedly told the candidate that, “I’m here to help.” After his fateful meeting with BlackRock’s Fink, candidate Biden announced, “We are going to get rid of fossil fuels…” In December 2020, even before Biden was inaugurated in January 2021, he named BlackRock Global Head of Sustainable Investing,  Brian Deese, to be Assistant to the President and Director of the National Economic Council. Here, Deese, who played a key role for Obama in drafting the Paris Climate Agreement in 2015, has quietly shaped the Biden war on energy.

This has been catastrophic for the oil and gas industry. Fink’s man Deese was active in giving the new President Biden a list of anti-oil measures to sign by Executive Order beginning day one in January 2021. That included closing the huge Keystone XL oil pipeline that would bring 830,000 barrels per day from Canada as far as Texas refineries, and halting any new leases in the Arctic National Wildlife Refuge (ANWR). Biden also rejoined the Paris Climate Accord that Deese had negotiated for Obama in 2015 and Trump cancelled.

The same day, Biden set in motion a change of the so-called “Social Cost of Carbon” that imposes a punitive $51 a ton of CO2 on the oil and gas industry. That one move, established under purely executive-branch authority without the consent of Congress, is dealing a devastating cost to investment in oil and gas in the US, a country only two years before that was the world’s largest oil producer.[iv]

Even worse, Biden’s  aggressive environmental rules and BlackRock ESG investing mandates are killing the US refinery capacity. Without refineries it doesn’t matter how many barrels of oil you take from the Strategic Petroleum Reserve. In the first two years of Biden’s Presidency the US has shut down some 1 million barrels a day of gasoline and diesel refining capacity, some due to covid demand collapse, the fastest decline in US history. The shutdowns are permanent. In 2023 an added 1.7 million bpd of capacity is set to close as a result of BlackRock and Wall Street ESG disinvesting and Biden regulations. [v]

Citing the heavy Wall Street disinvestment in oil and the Biden anti-oil policies, the CEO of Chevron in June 2022 declared that he doesn’t believe the US will ever build another new refinery.[vi]

Larry Fink, Board member of Klaus Schwab’s World Economic Forum, is joined by the EU whose President of the EU Commission, the notoriously corrupt Ursula von der Leyen left the WEF Board in 2019 to become EU Commission head. Her first major act in Brussels was to push through the EU Zero Carbon Fit for 55 agenda. That has imposed major carbon taxes and other constraints on oil, gas and coal in the EU well before the February  2022 Russian actions in Ukraine.  The combined impact of the Fink fraudulent ESG agenda in the Biden administration and the EU Zero Carbon madness is creating the worst energy and inflation crisis in history.

[i] Larry Fink, A Fundamental Reshaping of Finance, Letter to CEOs, January, 2020, https://www.blackrock.com/corporate/investor-relations/2020-blackrock-client-letter

[vi] Fox Business, Chevron CEO says there may never be another oil refinery built in the US, June 3. 2022, https://www.foxbusiness.com/markets/chevron-ceo-oil-refinery-built-u-s