Destroying the food supply is the PLAN: Australia trashes fresh avocados while infant formula shipped to US border as America’s own babies go hungry

In tomorrow’s Situation Update podcast, we’ll cover all the crypto carnage and market implosion that’s accelerating right now, but for today’s podcast, we focus on the deliberate food destruction that’s taking place across the world in order to engineer mass starvation.

In the United States, the largest manufacturing plant of infant formula was shut down in February by the FDA, citing unclean floors and microbiological contamination of the powdered formula products. The company in question is called Abbott Laboratories, and I find it astonishing that the company didn’t have sufficient epoxy floors and non-porous wall surfaces to meet FDA requirements in its manufacturing facility. That’s why the FDA shut it down, and it seems that in this case, the FDA actually did its job correctly.

But the infant formula shortage is now so pronounced that we’re starting to hear calls to reopen the facility even without the safety measures in place, alongside bizarre claims that even if some children die from bacteria contamination, far more might die from a lack of infant formula. Therefore, the argument goes, it’s okay to sell contaminated infant formula products — a completely insane idea that smacks of the “greater good” justification for toxic vaccines, in fact.

We remind mothers that they can make their own infant formula at home, since the Abbott Laboratories formula products are, in my opinion, complete garbage processed food ingredients such as corn syrup solids and processed milk proteins. The shortage of this junk food is actually a blessing if it teaches moms to make their own formula or switch back to breastfeeding.

While America’s infants are faced with starvation, the Biden regime — thrust into power through a criminally rigged “election” — has been shipping pallets of infant formula to the US southern border to feed the babies of illegal immigrants.

This is yet more proof of the “America last” policy of the Biden regime, which seems to go to great lengths to punish the American people and dismantle America’s infrastructure, almost as if the Biden puppetmasters were waging war against America. (Well actually, they are.)

The first photo is from this morning at the Ursula Processing Center at the U.S. border. Shelves and pallets packed with baby formula.

The second is from a shelf right here at home. Formula is scarce.

It’s not just the border, either. While America’s food infrastructure is crumbling, more and more American people are wondering why Joe Biden and the US Congress are sending $40 billion to Ukraine while US children are starving. Babylon Bee offers the perfect headline that captures the insanity: 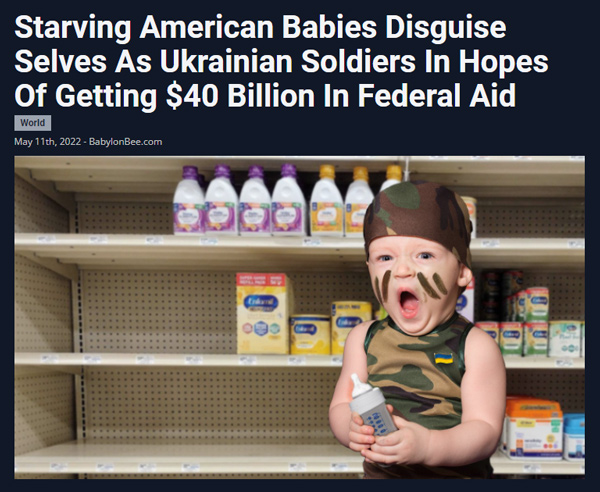 It seems like, to get any infant formula in America today, you either have to be the child of an illegal immigrant or the child of a Ukrainian national.

Meanwhile, it seems like the vaccine-induced lobotomies have really taken a toll in Australia, where avocado industry leaders have become so mentally retarded that they are throwing away thousands of avocados in landfill while claiming this “supports farmers.”

They’re literally just dumping truckloads of fresh, healthy avocados, even while much of the world is facing food scarcity. These are probably the same people who ordered everybody to wear masks and take covid vaccine injections. Now, they’ve lost the ability to function in a rational manner, and they think farming is the process where you grow food and then trash it before anybody gets to eat it.

It truly makes you wonder how long humanity has left remaining, if we’d already lost the ability to recognize the value of food.