USA: Before Americans can speak about ‘democratic values’, they must find ways to rein the corporate destroyers of family values once and for all.

Corporations that count children high among their target audience, like Kellogg’s and Lego, have jumped on the month of June’s ‘pride’ bandwagon, pushing controversial marketing schemes on a demographic that deserves protection from such mature themes.

Today, not even the mundane act of sitting down to a bowl of cold breakfast cereal is free from some sort of political messaging. Indeed, parental discretion is strongly advised as far as our children’s mental health is concerned.

That much became obvious as the Kellogg Company rolled out its ‘Together With Pride’ campaign as limited edition cereal boxes hit store shelves across the country on June 1, marking the company’s latest collaboration with GLAAD (Gay & Lesbian Alliance Against Defamation).

“LGBTQ+ icons and friends of GLAAD will start their day with the new cereal to celebrate that no matter who you are or who you love, you are too awesome to fit into a (cereal) box,” the message read.

It went on to say that a portion of the profits earned from each box of cereal sold will go towards “accelerating acceptance and advancing equality for the LGBTQ+ community,” a message that seems to stand in direct contradiction to Kellogg’s mission statement, “Nourishing families so they can flourish and thrive.” 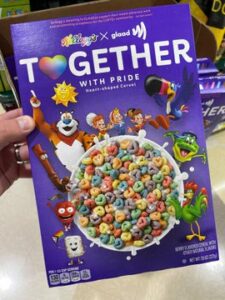 The cover of Kellogg’s new cereal box features all of those adorable corporate mascots for obesity and diabetes familiar to every American, including Tony the Tiger, Dig’em the Frog, and the Rice Krispy’s elves. On the side of the box, Toucan Sam, the mascot for Froot Loops is featured, instructing prepubescent children to fill in the provided blanks with their own special pronouns. At this point, some people may be wondering what on earth happened to good ol’ fashion decoder rings, and other assorted marketing gimmicks aimed at youth.

This gratuitous corporate campaign that promotes sexual lifestyles, aimed directly at the young and impressionable doesn’t end there. In the run-up to June, Lego, the Denmark-based company, toyed with the idea of homosexuality and transgenderism in its ‘Everyone is Awesome’ release, a 346-piece collection that includes a rainbow-colored stage for 11 bland monochromatic figures.

Matthew Ashton, vice president of design for Lego, explained the meaning behind each color of the figures.

The black and brown colors “represent the broad diversity of everyone within the LGBTQIA+ community,” he said.

The pale blue, white and pink colors are meant to “support and embrace the [transgender] community as well.”

“I purposely put the purple drag queen in as a clear nod to the fabulous side of the LGBTQIA+ community,” he said.

The allusion was to a strange new social event being featured at taxpayer-supported public libraries across the country where drag queens read to children – many no older than four and five years old – stories loaded with sexual ideas and innuendo.

And like almost every event or activity promoted by the LGBTQ+ community and aimed at children, there has been very little in terms of pushback, at least from the media. Although many children exposed to such mature topics are not yet old enough to lace up their own shoes, it has somehow become fashionable to seed their young minds with subjects totally beyond their comprehension.

Consider, for example, the “gender fluid” child-star, Desmond Napoles, who goes by the stage name ‘Desmond is Amazing,’ who began performing as America’s first ‘drag kid’ at the tender age of 10. Although one might think that the media would err on the side of caution and even alarm when reporting on this child, who many say is suffering from outright abuse, the overwhelming reporting on Desmond has been nothing short of flattering, fawning and downright promotional. Don’t believe it? Check out the way ABC’s Good Morning America program heaped accolades upon Desmond’s bewigged head. 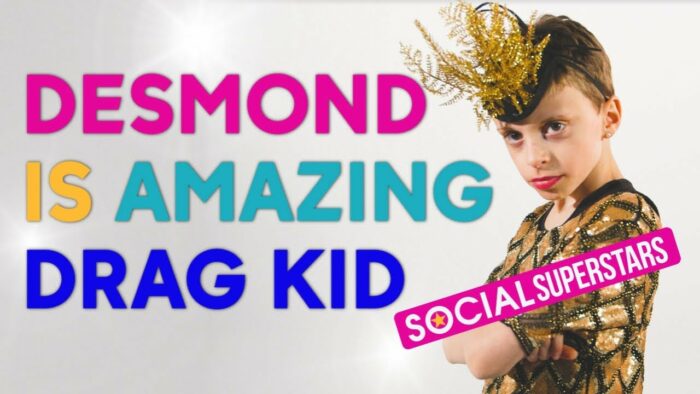 Strangely, such examples of overt exploitation of children continue to happen, despite the fact that the public response to such stories has been one of revulsion, sympathy and even anger. The abovementioned Good Morning America clip, for example, garnered over 1 million views on YouTube, while generating over 65 thousand down votes compared to 3.9 thousand likes. Corporate America is greeted by the very same negative response every time it tries to cash in on the virtue-signaling.

In 2019, Coca-Cola, for example, the very same corporation that recently lectured its employees to “be less white,” released a Sprite commercial that celebrated the transsexual lifestyles of young people. The backlash was deafening. Ditto for when Gillette lectured its target audience about the pitfalls of “toxic masculinity.”

So here we have, on the one end of the corporate spectrum, businesses and media celebrating the depraved lifestyle of a ‘drag kid’ who performs at night clubs, while on the other end warning about males exhibiting too much masculinity. It really makes one wonder what the heck is going on in the corporate boardroom. Are these corporate campaigns really being organized with an eye to the bottom line, or is it more of a program to desensitize society to the evils of pedophilia? Even if the answer is no, that is the unfortunate perception that is being fostered.

The dilemma reaches the critical stage when it is considered how little recourse the average consumer and citizen groups have against behemoth corporations, which, due to their sheer size and monopolistic powers, are practically immune to organized efforts aimed at punishing them, like boycotts and petition drives. Yet something must be done to stop the corporate-sponsored hyper-sexualization of our youth.

Before Americans can speak about ‘democratic values’ with a straight face, they must find legitimate ways to rein in these corporate destroyers of family values once and for all. While it is nearly impossible to stop corporations from targeting youth with their omnipresent advertising, the line has been crossed when the advertising attempts to sell alternative lifestyles to children, who are too young to understand the ‘product’ being hawked. That, in a nutshell, is a form of pedophilia that must be condemned from all corners of respectable society.