Left amidst the ruins of the Azov battalion’s headquarters in Mariupol were the business cards from the German embassy. One was of an attaché named Michael Faul, a Canadian colonel named Colonel Brian Irwin and the French Embassy staff member in Kyiv, First Secretary Christophe Boursin.

MICHAEL FAUL: According to the following information, Faul now works in the UK: “Michael Faul works at German Embassy London and Consulate General Edinburgh, which is a Federal company with an estimated 766 employees.” So he has been relocated or has always been working there, probably for MI6, the UK Secret Service. Last Update: 3/10/2022 5:43 PM (move March 3 to UK), EMAIL: m***@london.diplo.de.

COLONEL BRIAN IRWIN: This is very interesting; the following is known about him:

As Canada’s Defense Attaché to Ukraine from August 2016 to July 2019, Colonel Irwin proved instrumental in achieving Canada’s foreign policy goals. He quickly became an influential and important member of the [Canadian] mission [in Ukraine], where he advised successive commanders of the joint task force, promoted security sector reform and actively contributed to military cooperation between the two nations. Known for his professionalism and diplomacy, he has had an undeniable influence on the operations of the Canadian Forces in Ukraine.

The likely authenticity of the documents is enhanced by the fact that in 2018, Irwin had been photographed shaking hands with a member of the Azov Battalion, indicating Canadian government support for the neo-Nazi outfit. 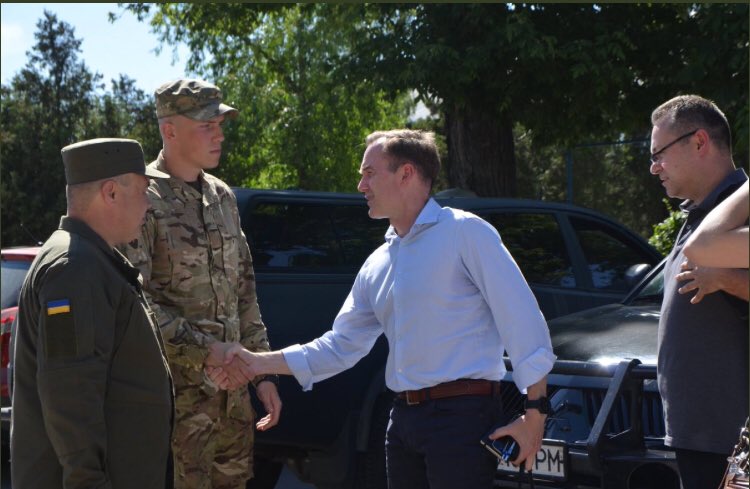 Brian irwin shakes hands with member of Azov battalion during his sting as Canadian Defense attache in Ukraine. [Source: twitter.com]

The third business card found was of the assistant first secretary at the Embassy of France in Kyiv, Ukraine, Christophe Boursin. There are no pictures of him, but he may still be in Kyiv.

Along with the business cards found in Azov Battalion headquarters were Nazi insignia, making clear the Battalion’s admiration for Adolf Hitler and the original German Nazis.

The documents were discovered on my second visit to Mariupol. My last visit, some two weeks ago, was a more emotional trip, as heavy shelling, rockets and fighting around the Azov steel factory were happening The port was partly freed and one could hear shelling from there as well.

The crews of many ships were held hostage by Azov. The remaining residents of the city were walking around, with “the gruesome experience of war in their eyes,” searching for clean water and waiting in line for food, which was distributed by the Russian army in cooperation with the Donetsk People’s Republic.

So I went back two weeks later and a lot has happened since then. The Azov neo-Nazi militia had surrendered and the remaining soldiers have been captured and transported to prison by buses. They will receive, hopefully, a fair trial, in the DPR or Russia. Same as what happened to the jihadists in Syria they were transported from Eastern Aleppo and Ghouta to Idlib, which until now is (unfortunately) for a large part still a stronghold of Al-Qaeda or Hayat-Tahrir-as-Sham.

The Port of Mariupol

According to the Russian Ministry of Defense, from which we received an update, the port was now liberated and demined:

“Specialists of the Black Sea Fleet and Engineer Troops have completed demining the territory of the Mariupol port. More than 12,000 explosive objects and weapons abandoned by Ukrainian radicals were found and neutralized. The approach channels and internal water areas were freed from sunken ships and other navigational obstacles, as well as the port was demilitarized. In total, more than 1.5 million square meters of water area, 18 berths and 32 vessels were inspected. In total, the specialists of the detachment of the International Mine Action Center have destroyed more than thousand explosive objects since the beginning of their work.”

Western media has claimed that where the Russians were, they left a trail of death and destruction; however, from what I have experienced so far in Volnovakha and Mariupol, the trail is mostly from the Ukrainian army and militia.

Some public facilities in the cities were working again. The city square was cleaned, we even had a quick look in the zoo, where the animals were still alive. The Western media again are giving opposite stories.

Also, I visited the second largest steel factory in Mariupol, the Steel factory Illich, Mariupol’s second largest factory retaken by the 36th Russian Brigade. The steel factory was nearly totally destroyed and I believe it cannot be rebuilt, but as Dennis Pushilin (the leader of the DPR) told us on the square of Mariupol: “Every building will be rebuilt or newly built,” so one never knows.

The plant produced a wide range of hot-rolled and cold-rolled steel, including for shipbuilding, oil pipeline, drilling gas pipeline and water pipelines. The company is the only company in Ukraine to produce galvanized steel and liquefied gas tanks.

The company’s products were certified by international classification societies; such as Lloyd’s Register (UK, Germany), U.S. Bureau of Naval Personnel and by the Marine Register of Navigation (Russia), as well also by the German Certification Center TTSU. The company exported the products to more than 50 countries around the world.

In April, the Russian army captured the second largest steel factory in Mariupol. What they found was a major wreck and in the storage were (as can be seen in the photo gallery) self-made moving cars with machine guns on them. This form of warfare became popular in the Syria and Iraq wars, introduced by jihadists sponsored by the West.

The Ukrainian army made their military quarters in the factory, like in the Azov Steel factory, and sent the workers home or held them hostage and used them as human shields, as happened everywhere in Ukraine, especially in Mariupol, where many supporters of the Azov regiment could be found.

In the basements of the Illich factory were symbols of this Nazi ideology, symbols that are banned in the West, but are now ignored by Western governments and even all European Union (EU) heads of government. “SLAVA UKRAINE” which literally means: HEIL (HEIL means glory) UKRAINE.” Where have we heard this slogan before?

The most shocking part of the day though was the visit to one of the former headquarters of the Azov battalion. It wasn’t only an office, but it was also a housing and a training facility. Even young children were trained there with guns and rifles.

As from the material which was left behind, you could clearly see the Nazi ideology, Hitler paintings, SS stickers, books and booklets with swastikas and brochures and manuals from NATO, filled with instructions—along with the business cards of the NATO advisers and western government officials.

This made clear the western complicity in the crimes of the Ukrainians and injustice of the war more broadly.

Donbass Insider reported on June 7 that French Caesar guns opened fire on civilian areas in the Donbass and Donetsk.

This exemplifies the deadly consequences of western weapons shipments to Ukraine; these weapons are being used to kill and maim civilians. The same report noted that “the terror bombardments started again about 10 days ago on Donetsk and the cities of Donbass,” and that Ukrainians are now “firing every day on the cities of Donbass, especially on Donetsk, Gorlovka, Makeevka and Yaccinovataya. Yesterday (June 6) alone, 7 people were killed and 16 wounded and the killing continues.”

The report continued: “some of the shells had been fired by American M777 howitzers,” which had been supplied as part of the Biden administration’s weapons pipeline.

The shells, it was specified, do little material damage when they land on the streets or in the open, but are devastating when they hit a building, having the real capacity by their armor-piercing nature to penetrate structures better, with the devastation one can imagine.

The author of the report stated that he had never heard of such munitions being used on civilian areas of the Donbass in the past; thus what we are seeing is a new and more deadly phase of the conflict there. Ukrainian President Volodymyr Zelensky himself, in a very recent statement, said that Donbass would be a ruin and that it would be “deserted,” inferring that people will be killed before the conclusion of this war.

The western media blames the Russians for all the devastation when clearly Ukraine is at the forefront of it—with help from its friends in the West.

Proof of Time Travel? These Famous Faces Appear Throughout History