A molecule found in home-grown sprouts is documented to activate nervous system stem cells to regrow nerve tissue and repair damaged nerves and brains. This molecule is created automatically, at zero cost, when broccoli sprouts are sprouted using something as simple as a mason jar and a sprouting lid.

The molecule is called sulforaphane, and it’s found in all cruciferous vegetables. But its highest concentrations (by far) are found in broccoli sprouts.

Sulforaphane is just one of many “neuritogenic” molecules that are known to regenerate nerve tissue and help repair damaged brains. Given that mRNA spike protein vaccines cause direct damage to neurological and vascular systems, sulforaphane may represent one of the most important, promising natural molecules to help repair and restore brain damage in vaccine victims.

GreenMedInfo.com has done extensive research on sulforaphane and other natural molecules. Their list of neuritogenic substances, found at this link, shows all the following substances exhibiting documented neurological repair capabilities:

Green Med Info has also published an overview of sulforaphane and its brain repair mechanisms as documented in published science. From that story:

The term 5 mM means 5 milli-molar which is a reference to the concentration of sulforaphane in blood. 5 milli-molar is 5 thousands of a Mole. A Mole is a set number of molecules in one liter of a solution, regardless of molecular weight.

Although this depends a lot on body weight, we think it wouldn’t require much consumption of broccoli sprouts to achieve 5 mM concentrations in the blood of a person.

When neural stem cells were exposed to sulforaphane, they transformed into neurons

From the Green Med Info article:

…exposing NSCs to sulforaphane resulted in their differentiation [into] neurons, lending powerful support to the hypothesis that sulforaphane could stimulate brain repair.

This means that sulforaphane is a kind of molecular “activator” that causes neural stem cells to become neurons. This is how damaged brain cells are regrown.

And for anyone who thinks you can’t grow brain cells, you already did it once. Your entire brain was grown from nothing, in your mother’s womb. A similar process grew your heart, lungs, bones, nerve cells and so on. Every human body knows how to regrow nerve cells. Otherwise, humans wouldn’t exist.

How to grow your own sulforaphane for mere pennies

Because God and Mother Nature gave us all the medicine we need, you can “manufacture” your own sulforaphane for mere pennies and literally transform air into sulforaphane through the use of broccoli sprouts. 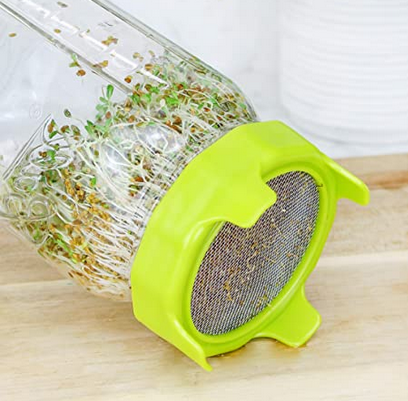 You can then eat the sprouts, use them in salads, blend them into smoothies, drop them into soups or whatever you want to do. Sulforaphane is a very robust molecule and it’s somewhat difficult to destroy, so don’t think you have to treat it like a delicate, fragile substance. Blending sprouts does not destroy their molecules. That’s because these molecules are very, very small.

In my podcast, below, I reveal a tip for how to multiply the sulforaphane production by up to 10 X by spraying your sprouts with a low-cost source of sulfur. While broccoli sprouts create sulforaphane from the air by grabbing carbon, oxygen and nitrogen from atmosphere, they need a source of sulfur, which is absorbed through roots.

Other benefits of sulforaphane

Sulforaphane also exhibits powerful anti-cancer properties. GreenMedInfo lists the best properties of this molecule as reflected in published medical literature. It shows that sulforaphane is documented to help with:

… and many other conditions.

Sulforaphane is one of my top five molecules from nature. Resveratrol is another one, and vitamin D is No. 1.

Remember: Everybody can make unlimited quantities of sulforaphane for nearly free. No person needs to wait for a doctor’s permission to grow and eat broccoli sprouts. You don’t need health insurance coverage or a visit to the (toxic) pharmacy.

Even better, corrupt, pharma-infested governments of the world can’t take away your broccoli sprouts unless they go full tyranny and start banning seeds. Even then, seeds are pretty easy to hide from government thugs.

In Standoff With Putin, Biden Makes Sure European Allies Are With Him

Putin and the War to End America (VIDEO 6 min)

Gravitas Plus Report: The dark side of Electric Vehicles