INDIA: After India finally gets somewhat of a grip on its deadly second wave, one of its health regulators just took away one of its main lines of defense.

India’s Directorate General of Health Services (DGHS) has executed a policy reversal that could have massive implications for the battle against covid-19, not only in India but around the world.

Hundreds of thousands, if not millions of lives, could be at stake. The health regulator has overhauled its COVID-19 treatment guidelines and removed almost all of the repurposed medicines it had previously recommended for treating asymptomatic and mild cases. They include the antibiotic doxycycline, hydroxychloroquine, zinc, ivermectin and even multivitamins. The only medicines that are still recommended for early treatment are cold medicines, antipyretics such as paracetamol and inhaled budesonide.

“No other covid-specific medication [is] required,” say the new guidelines, which also discourage practitioners from prescribing unnecessary tests such as CT scans.

“Patients are advised to seek tele consultation; and Covid-19 appropriate behaviour must be observed such as mask, strict hand hygiene and physical distancing… [Patients are also advised to maintain] a healthy diet with proper hydration… [and] to stay connected [with family] and engage in positive talks through phone, video-calls, etc.”

The decision to remove ivermectin, multivitamins and zinc from the treatment guidelines is hard to comprehend given the current state of play in India — unless one assumes foul play.

After suffering one of the worst covid-19 outbreaks since the pandemic began, resulting in the loss of hundreds of thousands of lives, India is not just flattening the curve, it is crushing it.

And the widespread use of ivermectin, a potent anti-viral and anti-inflammatory with an excellent safety profile, appears to have played an instrumental role.

Other countries in the region have already taken notice. Indonesia just approved the use of ivermectin in Kudus, a local contagion hotspot.

This is the last thing the World Health Organization (WHO) and the pharmaceutical companies whose interests it broadly represents want. As such, it was no surprise that WHO was delighted with the DGHS’ policy reversal. “Evidence based guidelines from @mohfw DGHS – simple, rational and clear guidance for physicians,” tweeted WHO’s chief scientist Soumya Swaminathan, of Indian descent. “Should be translated and disseminated in all Indian languages.”

As I posited in my recent article “I Don’t Know of a Bigger Story in the World” Right Now Than Ivermectin: NY Times Best-Selling Author, there are three possible explanations for global health regulators’ opposition to the use of a highly promising, well-tolerated off-label medicine such as ivermectin:

It’s worth noting that while India’s DGHS has dumped most cheap off-patent treatment options against Covid, including even multivitamins, more expensive patented medicines continue to get the green light.

They include Gilead’s prohibitively expensive antiviral Remdesivir, which DGHS  continues to recommend for “select moderate/ severe hospitalised COVID-19 patients”, even though “it is only an experimental drug with potential to harm.” It has also authorised the use of the anti-inflammatory medicine tocilizumab, which costs hundreds of dollars a dose.

The DGHS began recommending the widespread use of ivermectin as early as April, in direct contradiction of the recommendations of the World Health Organization. Treatment packs were assembled in many states and distributed to patients testing positive for Covid. In at least two states — Goa and Uttarakhand — the medicine was distributed as a preventive.

As has already happened in over 20 countries where ivermectin has been used — from Mexico, the Dominican Republic and Peru to Slovakia, the Czech Republic and Bangladesh — case numbers, hospitalizations and fatalities have fallen in almost vertical fashion. On Monday the country recorded its lowest number of new cases in 61 days. 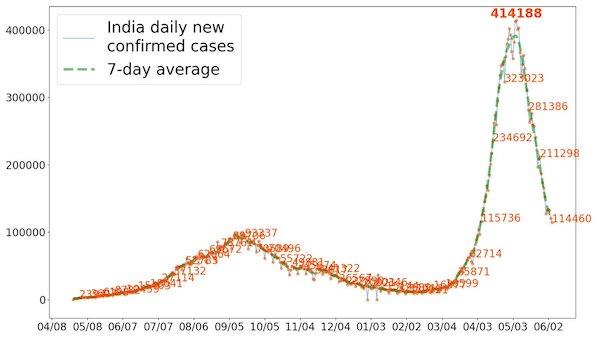 “When we started seeing more cases, we decided to take up a door-to-door survey,” Bagalkot District Health Officer Dr Ananth Desai told New India Express. “When the health officials noticed people with symptoms during the survey, they tested them immediately and provided them with home isolation kits, which had medicines like Ivermectin, calcium and zinc tablets along with paracetamol. We advised the patients to start with the medication even before their Covid-19 test results came out. With these measures, we noticed that many patients recovered faster. This helped in increasing the recovery rate”.

In India’s capital, Delhi, the number of people testing positive for Covid-19 daily has fallen 97% from a peak of 24,000 on April 24. The number of deaths is down by around 85%. Only 17% of the total beds earmarked for Covid-19 treatment in Delhi and around 40% of the ICU beds were occupied late last week, according to the government’s Delhi Corona app. At the peak, there were days when no ICU beds were available in the city. 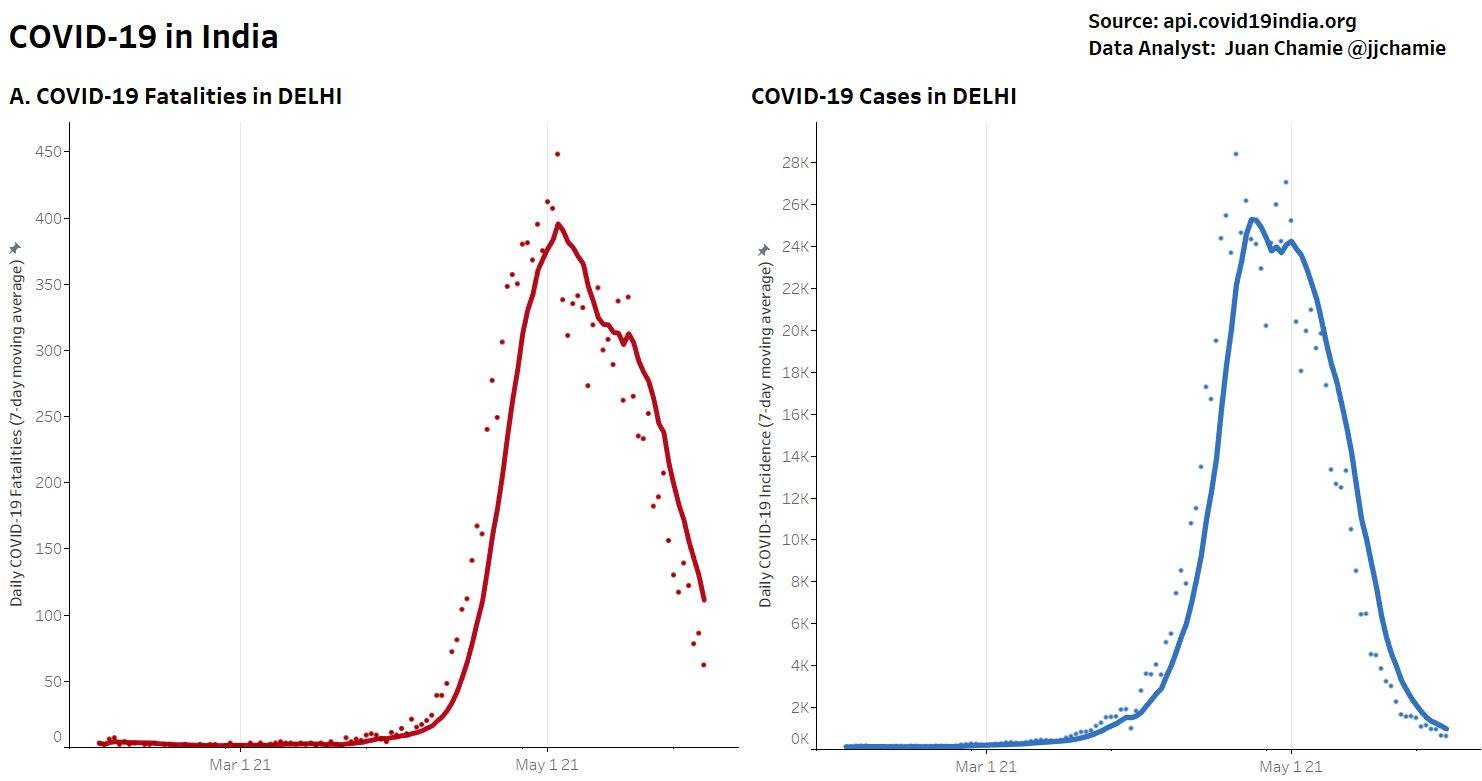 Out of the Darkness, But For How Long?

Just over four weeks ago India was in a very dark place. At one point it was accounting for almost half of all global cases and one in every four covid-19 deaths. The government had lost complete control. Four weeks later, the country, while not out of the woods, is in a much better place. While the official numbers of cases and deaths are probably still a fraction of the real numbers, the trend is clearly moving in the right direction.

An important reason for that is that doctors in India have been treating covid patients as early as possible — something that isn’t happening in most countries, particularly rich ones that play an outsized role in setting global health policy. In India early treatment has helped to reduce the number of cases becoming acute. And that has helped to reduce the pressure on hospitals and vital resources such as oxygen. Ivermectin also appears to have helped reduce the spread of the virus, thanks to its potent anti-viral properties.

Just about everywhere ivermectin is used, the number of cases, hospitalizations and deaths fall precipitously. Of course, this is only a temporal correlation. But nonetheless a clear pattern across nations and territories has formed that strongly supports ivermectin’s purported efficacy. And that efficacy has been amply demonstrated in dozens of clinical studies and multiple meta-analyses. But it’s not proof enough for global health authorities, which have set the bar for ivermectin so high that it’s almost impossible to straddle.

Of course, other factors such as lockdowns, travel restrictions and increased herd immunity have also played a part in India’s rapid turnaround. But vaccines’ role has been minimal given that just 16 doses have been administered per hundred people. It’s going to take many more months, if not longer, to vaccinate a majority of the population. In the meantime, hundreds of millions of people will remain unprotected from the virus. Many will end up catching and transmitting it. Yet the Directorate General of Health Services has taken away one of the country’s only lines of defense.

It remains to be seen whether state governors and health bureaucrats will comply with the recommendations. For the moment the separate treatment protocols recommended by India’s Ministry of Health and Family Welfare (MOHFW) and the Indian Council of Medical Research (ICMR) continue to include ivermectin. As such, many doctors are likely to continue prescribing the medicine. But what happens if MOHFW and ICMR follow the DGHS’ lead and also drop ivermectin. Will doctors stop using a medicine they know to work against a virus that has already caused so much devastation?

India’s most populous state, Uttar Pradesh, has been using ivermectin since last summer. In this second wave the turnaround was so dramatic that even the World Health Organization (WHO) showcased its achievements. In a May 7 article titled “Going the Last Mile to Stop Covid-19” the WHO noted that aggressive population-wide health schemes, including home testing and “medicine kits”, had helped regain control of the virus. But what the WHO failed to mention is what was in those medicine kits.

Instead, three days later WHO’s chief scientist Soumya Swaminathan, of Indian descent, tweeted out a reminder that ivermectin is not recommended to treat covid-19 patients. The tweet included a press release issued by the company that manufactures the drug, Merck, saying it had found no evidence to support the use of ivermectin in the treatment of COVID-19. Merck, it’s worth recalling, is developing an antiviral compound, molnupiravir, that will have to compete directly with ivermectin, one of the cheapest, safest drugs on the planet — unless, of course, ivermectin is taken out of the picture.

But if that happens, the result is likely to be a lot more deaths. Peru, the first country to use ivermectin against Covid, is living proof of that. The medicine was first used in eight states during the very early stages of the pandemic (May-July). After showing promise, it was extended to the whole country. Excess deaths dropped 59% (25%) at +30 days and 75% (25%) at +45 days after day of peak deaths. But in October, after the first wave had been brought under control, a newly elected government in Lima took the inexplicable step of withdrawing a number of medicines, including ivermectin, from its treatment guide for the disease. 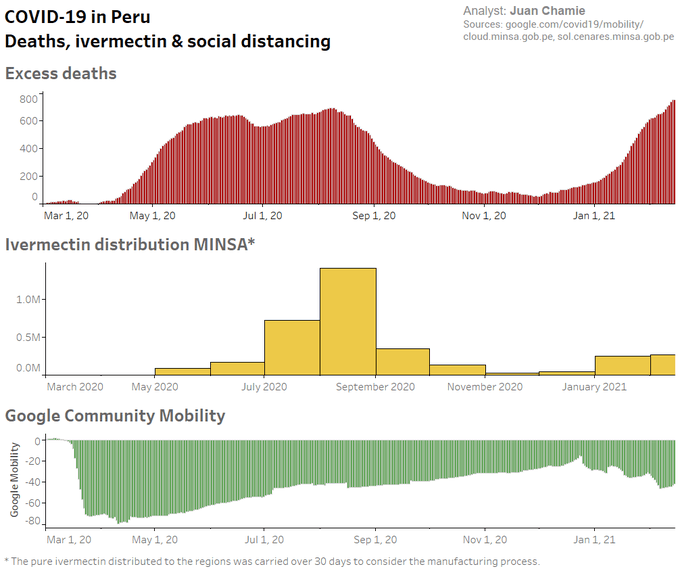 Within weeks hospitalizations and deaths were soaring once again. The graph above, taken from a study by Juan Chamie, Jennifer Hibberd of the University of Toronto and David Scheim of the US Public Health Service, shows the sharp rise, fall and resurgence in excess deaths (among the over 60 year-old cohort) in Peru as the virus waxed, waned and waxed again.

Since Peru dropped ivermectin the virus has raged through the population. Peru now has the highest per-capita death rate from covid on the planet. It’s a cautionary tale that India, with a population more than 30 times that of Peru, would do well to heed.