The World Economic Forum (WEF) has reached a new climax. It apparently has become a hub for high-flier and high-priced prostitution, pardon, “Escort Services”. Like never before. This is amply covered by the international media. With exception of a few, the major Swiss media remain silent. Why?

Why is Switzerland still hosting this new Sodom and Gomorrah? Politely called the Chaos of Davos? The citizens of Davos dislike the WEF meeting ever more vehemently. It destroys not just their tranquility, but also their winter sport pleasure and business. Tourists stay away.

They do not want to be confronted with up to 5000 – or more – police and military. “For security” of course. Looking down a gun-barrel at every street corner is not pleasant.

In the last two to three decades – since the neoliberal ascent on humanity – any unpleasant imposition on the people of the world is, indeed, “for their own security”, and by inference, “for their own good”. That shuts up any critic. And it’s repeated so often, we start believing it. 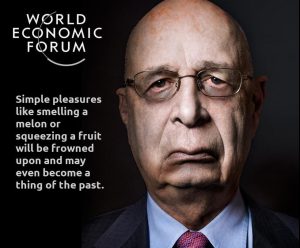 That the WEF has been an attraction for high-flying whores, who now for better blending in to the regular WEF attendees, appear in smart business attire is not new. But the WEF 2023 has reached new dimensions.

This new Escort High, plus every and ever-more dystopian themes that accompanies the WEF-magnates’ sexomania, may signal the end phase of the WEF. The world would be a much better place without it, and without the oligarchs and financial behemoths, like BlackRock et al, which support and amply fund WEF – invading Davos.

Not to speak about the millions of Swiss tax-payer money the government spends in support of the WEF’s annual meetings and police and military protection.

This man, Klaus Schwab, a megalomaniac who looks like a phantom from outer space and speaks like a humanity-hating monster, is so unpopular worldwide, it seems he himself doesn’t have a clue.

His unpopularity is perhaps best reflected by a reader’s commentary after Schwab’s speech at the recent G20 / B20 meeting in Bali: “I wish Klaus Schwab will get everything that people in the world wish him…” Say no more. It’s all bottled-up in these few words. See this.

Wouldn’t that be the moment to gracefully disappear and let the WEF noiselessly collapse – and vanish? After 52 years and 53 Davos meetings – enough damage was done. Go away!

Will the WEF have a well-deserved Sodom and Gomorrah ending – as religious history portrays?

While the global elite pretends tackling the world’s greatest problems – including gender inequality – the Davos summit is fueling a surge in prostitution. Escort and sex services are booming in Davos where political and financial titans gather during the WEF’s 53rd annual edition from 16 to 21 January 2023.

According to the Daily Mail 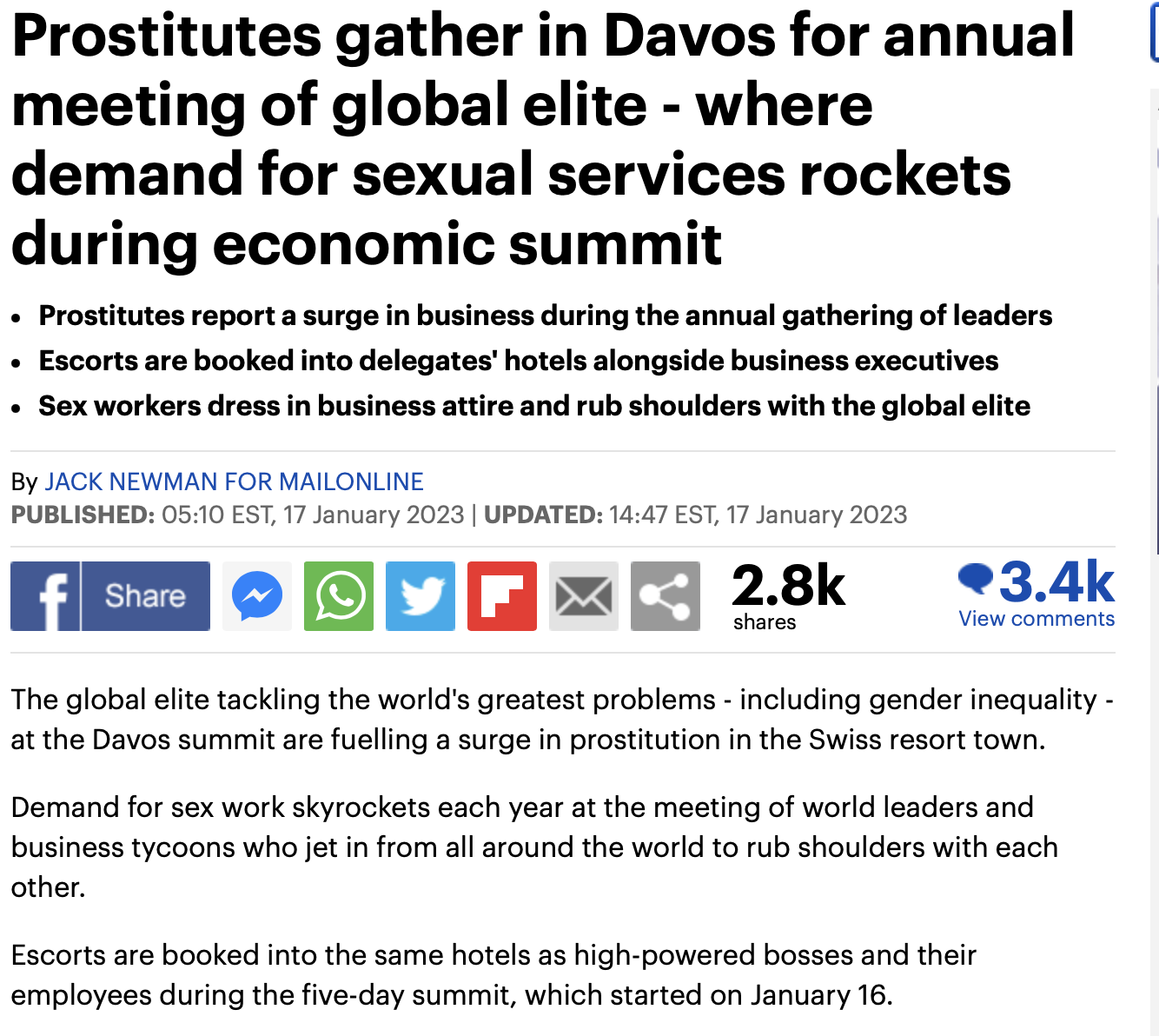 Sexual harassment by wealthy men at WEF is “so common” that female guests are advised not to attend events alone, the Austrian EXPRESS reported.

According to a 2020 report from the UK Times, women – even if they are accredited WEF attendees – are “routinely harassed” by the men who dominate the conclave. Indeed, the event began warning women that year not to go out alone after dark, “because if something happens with some big CEO, who is going to be believed? You or them?”

WEF’s female staff in Davos were warned to beware of accosting politicians and business magnates.

As one luxury Escort Lady said, “Believe me, you don’t want to go into litigation with them.”

Now on a more serious note. Criticism and even ridicule of the WEF’s dictatorial and dystopian approach to the world’s problems has reached in 2023 a new pinnacle. Though the words “democracy” and “freedom” are always in the forefront, they are hardly applied. They are merely the deed of nonstop propaganda for something that isn’t. And as Goebbels, Hitler’s Propaganda Minister, said already almost 80 years ago, “If a lie is often enough repeated, it becomes the truth”.

This false truth has brainwashed almost every Western citizen. We are being gradually enslaved while still believing we are living in a democracy. The WEF is part of the steady flow of propaganda but also a master tyrant, in the person of Klaus Schwab and his Israeli top adviser, “You useless eaters”, Mr. Yuval Noah Harari.

Switzerland boasting of “democracy”, if they were serious, they would have expelled Schwab and the WEF years ago, or even arrested Schwab for crimes against humanity.

Ukraine’s President Zelenskyy and his wife were invited to speak at the WEF, rather to beg for more money and weapons so as to “defeat” Russia. And yes, NATO, please help us, and make us a member of your war clan. The pair bashed Russia and especially President Putin with lie after lie, after miserable lie.

More war crimes were committed by the Zelenskyy regime, which massacred his own people in the Donbas area and elsewhere  just so he could blame the Russians for the bloodbath. Journalists on location who saw the truth were threatened to shut up, or else. Several “disappeared”.

Democratically speaking, President Putin should have also been invited to present his truth. He was not invited. With his presence, the WEF could have created a platform for peace. The WEF, true to its mission statement – “committed to improving the state of the world” – could have sponsored peace negotiations.

Instead, Schwab and his invited top political honchos facilitated more weapons, more killing machines, being shipped to Ukraine – so this dystopian government supported by a dystopian US / EU leadership – without any strategy to end the war, keep giving the most corrupt country in Europe, unconditional war assistance, sending endlessly without any criteria of “end-in-sight”, canons, tanks, and missiles, keep encouraging Zelenskyy to fight to the end, to the last Ukrainian, so to speak.

Thereby, doesn’t Schwab and all the other EU / NATO / US weapons deliverers become murderers by association; and shouldn’t they be arrested immediately and put on trial?

Talking about dystopia and “burden” – for whoever has to listen to this nonsense, listen to the ridicule of John Kerry’s, former US Vice President and now special Environment Envoy for the US. Kerry’s words, “A select group of human beings have a plan for “saving the planet” and its almost extra-terrestrial”. See this short video (40 sec).

A ‘select group of human beings’ have a plan for ‘saving the planet’ and it is almost ‘extra terrestrial.’ pic.twitter.com/nJbLPWNBMQ

For God’s sake, let’s stop him from “saving the planet”!

The “Weltwoche” (Swiss newspaper) Chief Editor, Roger Koeppel, sums up the 2023 WEF event in his Daily Special as depressive, giving the impression we are living the worst times in our lives, humanity is fast moving towards a climate apocalypse, especially when listening to the US / WEF puppet, UN Secretary General Guterres. How can he have forgotten that since about 30 years we are listening to the same narrative – we are just before the final climate collapse – and for 30 years the collapse has not happened… See this (in German), you may also view below.

The way the western WEF and lie-circus moves on – it is well possible that the Guterres-predicted apocalypse may happen in a form reflecting on the biblical legend of Sodom and Gomorrah.

Featured image is from WEF