US Troops In Iraq Targeted By Increasingly Sophisticated Combat Drones 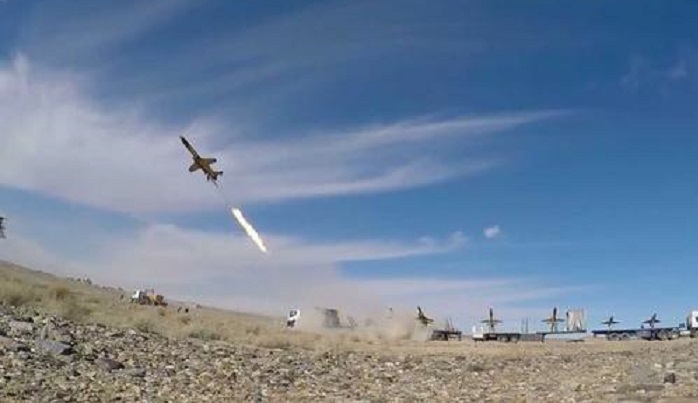 USA/IRAQ: The thousands of US troops still in Iraq are increasingly monitoring the threat from the skies, as a series of combat drones from an unknown source have reportedly targeted American bases over the past few months, according to a Friday report in The New York Times. The report blames “Iran-backed militia” for deployments of sophisticated small drones, citing the usual anonymous sources.

In Saturday’s incident the base’s C-RAM anti-air system was activated and shot down the pair of drones as they reportedly tried to attack the base. There were also Saturday incidents involving rocket attacks targeting a US-run diplomatic center in Baghdad, as well as Baghdad’s international airport.

The Associated Press details the string of incidents believed to involve Iran-backed militias as follows:

The Iraqi army said Sunday that two drones were destroyed above a base housing US troops, one month after the same base was targeted by an armed drone.

The US military’s C-RAM defense system was activated to shoot down the drones above the Ain al-Assad base, located in Iraq’s western desert, the Iraqi military said.

Several hours earlier, a rocket was shot down above Baghdad airport, “without causing casualties or damage,” said Colonel Wayne Marotto, spokesman for the US-led military coalition in Iraq.

The Times report had underscored that pro-Iranian militias are now in possession of “more sophisticated weaponry, including armed drones,” given that at least “three times in the past two months” they’ve been able to deploy “small, explosive-laden drones that divebomb and crash into their targets in late-night attacks on Iraqi bases.”

Both the pro-Iranian Iraqi paramilitaries and much of the Iraqi public have long pressured Baghdad government officials to order foreign troops out of the country, which like Afghanistan could soon reach two whole decades of American occupation.

This new small drone threat appears part of the direct pressure campaign on the US military with the goal of inducing a quicker Pentagon departure.

INDIAN WHISTLEBLOWER TELLS US WHAT IS REALLY GOING ON IN INDIA