Ukraine’s War vs. WHO’s Pandemic Treaty. “Who Rules over Health and Disease decides over Life and Death”.

USA/RUSSIA/UKRAINE/EU: It is not any easy comparison, juxtaposing a killing war with a “health treaty”. That’s at the outset. And that’s the type of confusion we are constantly being fed by the mainstream. But behind the mainstream is the World Economic Forum (WEF), the dark elite, the instrument for the financial complex – BlackRock, Vanguard and State Street, in particular, and other big ones, like Chase, City Bank and Bank America, Fidelity, to name just a few more.

They intend with all their financial power to take full control over Mother Earth. With this “rule based” role of assumed supremacy, they have no scruples. Klaus Schwab’s closest adviser has repeatedly said, out of arrogance, or out of sheer stupidity, is immaterial, that We, the People, are “useless eaters”. In other words, we can be done away with – neutralized – and the world would be a better place.

Can you imagine such statements coming openly out of the WEF, from a top WEF adviser?

Could it be that the real “useless eaters” are Hariri, Schwab, Gates et al?

The full eugenics agenda. That’s what’s being played out. Every vaxx-death at any time, for the last 18 months, and there is no end in sight.

To enhance this agenda of planned death, the Biden Administration initiated last December 2021 a new role for the World Health Organization (WHO), namely to become the Supreme Chief ruling over health and especially pandemic issues – ABOVE AND BEYOND individual member countries’ Constitutions (194 WHO members). In other words, abrogating their national sovereignty.

This is currently being debated at WHO in Geneva. A first attempt has been blocked a couple of weeks ago by a group of 47 African countries. But knowing the money and the sheer “rule-based” brutal force behind those who want to implement this Pandemic Treaty, the game is by no means over.

People, you must know, and you MUST Wake Up and realize, these are not accidental vaxx-deaths, they are not the result of medical malpractice, they are outright murder, outright genocide, perpetrated by the eugenists, and we know who are the most notorious eugenists. They make no secret of it. Those along with the multi-multi-billionaires, who want us to eat insects and bugs in the future to save the planet.

Have you ever wondered, how come that those billionaires that come to the Annual WEF event in Davos by private jet – and I mean by the hundreds, literally clogging the Zurich airport – are giving a flying sh*t about THEIR climate agenda? Actually, spitting in the very face of those, of Us, the People, who have fallen for it, THEIR climate agenda, and are taking it seriously?

Now comes the war, the planned and well-provoked Ukraine war, the deviation maneuver, so people don’t look at what’s going on behind the scenes, namely the gradual enhancement of the Reset Agenda, equaling the mass genocide agenda, through constant nonstop vaxxes, that are no vaccines – they even admit it – but are said to be experimental” mRNA injections. And the simultaneous digitization of everything, including your money your brain, called the 4th Industrial Revolution by Klaus Schwab.

This war in Ukraine is the result of a long-term and long-time western, i.e., Washington / NATO provocation on Russia, by threatening to make the fascist Ukraine (yes, clearly fascist under the current leadership and with the criminal Nazi-Azov Battalions, more than tolerated by the Zelenskyy regime). These Nazi-Azov Battalions have been fighting against and killing their “own Ukrainian” compatriots in the Donbas region, at least 14,000, of which two thirds are women and children, between the Maidan Coup in February 2014 until the Russian invasion on 24 February 2022. 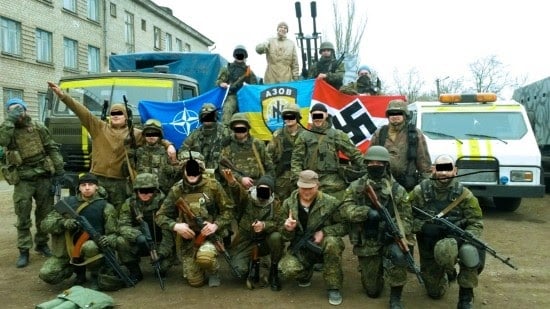 How many more pro-Russian Donbas Ukrainians they have killed since the beginning of the war is not clear. But for sure hundreds, maybe thousands more. The bulk of the urban housing, industrial and infrastructure destruction in the Donbas – and even beyond – has been caused by the Ukrainian own military, but is being blamed by the western media on Russia.

There are more vital provocations by Washington / Pentagon / NATO. Only a few weeks ago the Pentagon has finally admitted having funded and built 46 war-grade bio-labs in Ukraine. There is no need to explain what they are researching and eventually are capable of producing: Viruses much-much deadlier than corona. For example, Ebola, HIV, Plague and more – could all be manufactured by these labs. These viruses all have a mortality rate of about 50% or higher. They are obviously a national security risk for Russia.

Imagine, Russia building such labs in Mexico or Central America!

Compare this virus mortality to corona of an average 0.07%, and affecting mostly the elderly and of people with co-morbidities.

Back to the war. Russia has always been very careful in targeting areas with least risks for human casualties. Of course, avoiding human deaths is not possible in war. And of course, that is not what the western media are reporting. To the contrary, whether destroyed by Russia or the Ukrainian’s own army, it’s all blamed on Russia.

War is never a solution. Never – Ever. This is just meant to explain the Russian reaction, not to justify it.

It is at this point difficult or impossible to precisely account for the war casualties, deaths and injured. Overall estimates range from 45,000 to 60,000 people killed.

Compare this to the mass killing by the vaxx-agenda, by the forced and 24/7 propagated lie-campaign, and vaxx-blackmailing – you will lose your job if not vaxxed – this is a tyrannical dictate throughout Europa and the US. These 18 months of vaxx-crime – it began in mid-to-late December 2020 – has caused way more deaths not only than covid, than the war. Estimates are in the tens of thousands, if not hundreds of thousands – and if true and real counting would be possible, the vaxx-death toll might be in the millions.

This does not account for the associated deaths through secondary causes of the imposed covid plandemic, like untold and massive bankruptcies around the world, unemployment, poverty – extreme poverty leading to famine and – death.

This after only 18 months.

According to scientists, especially Dr. Mike Yeadon, former Pfizer Vice-President and Pfizer’s Chief Scientist, the real death toll will show up within 2 or 3 years after the deadly vaxx-injections had been administered.

Not all vaxxes are the same, there are different lots in circulation, trials of sorts, to determine which ones are the deadliest. Then, there are also placebo lots for politicians and for those who have sold their soul to the devil, the glamorous and famous ones, who heavily propagate for vaxxing, even pretend of having fallen ill to covid.

The lies are so ludicrous, but people believe it, fall for it, and may be running to the next vaxx-station – gimme-gimme-gimme – when the next propagated infection upswing starts sometime this coming fall – as already announced by several politicians. Among others, the President of Switzerland, at the end of a recent interview on a totally different subject, mentioned in a side-line the “likelihood of a new outbreak” later this year. – How does he know?

Now add to this multiple vaxx-craze, a real killing-spree, booster after booster after booster – no end in sight – what The Expose so eloquently explained, that the FDA “approves” Covid “vaccines” for 6-month-old babies, despite the fact that covid “vaccinations” in England alone have caused 179,000 deaths within 60 days of administering the deadly vaxx-shot.

It is your guess, what these poison injections will do to 6-months-old toddlers, and to kids of even older ages.

The Expose reported figure alone is a multiple of the war deaths so far. And that’s only for England, with about 60 million people. Extrapolating this figure for all of Europe and over the full time of “vaccination”, we reach easily in excess of 2 million deaths. We are talking in Europe alone about figures that are way beyond the Ukraine war deaths.

As pointed out before, not all vaxx-batches are the same. Different lots work on different body-organs, all with the objective to kill, maim, or to produce infertility.

As reported on 22 June by Children’s Health defense (CHD), researchers have found that the Pfizer covid “vaccine” reduces sperm quality — including sperm concentration and total motility count (the total number of moving sperm in a sample). This, according to a study published June 17 in the journal Andrology. See this

Other fertility reduction “vaccines” have been administered to tens of thousands of young women in child-bearing age in Africa, India and other Asian countries by a Bill Gates initiative, long before the “plandemic”.

Are these – all the above killer-vaxxes and fertility reduction shots – war-like crimes on humanity?

Add to this the potential crime on humanity of all times – the “Pandemic Treaty”, mentioned above. Only we the People can stop it. Most countries have already been sold to the idea – especially western countries – or will no doubt be attempted by coercion to submit to the WHO health rule – which, if approved by a simple majority, will become law in 2024.
And WHO will become WHT = World Health Tyranny.

Add to this, that WHO was created by the Rockefeller Group in 1948 and was then integrated into the UN system; a sheer question of money. That’s how WHO, has become a so-called UN agency which it isn’t really. WHO is funded by 70% to 80% from private sources, including from a key donor, the Bill Gates Foundation; as well as, GAVI, the Vaccination Alliance, created by Bill Gates, with headquarters next door to WHO; and by other mostly pharma-corporations through their philanthropical “trustfunds”.

What this means: Who rules over health and disease decides over life and death.

It could not be a more typical genocidal agenda.

We, the People, must not let this happen. And we won’t.

Resistance is growing every day.

We, the people have to take over – it may mean creating alternative, locally-based economic systems, away from the global financial institutions, away from the digitized ever-more tyrannizing world.

And – as I have said often before – we shall overcome!
We have to make this one sticking thought in our mind and soul – and we, indeed, will overcome.