The World Economic Forum’s Global Governance ‘E.S.G.’ Agenda: The Threat to Liberty You Haven’t Heard Of

In March of 2020 COVID-19 spread to the shores of the United States, introducing a medical threat that had all the signs of devastating families from sea to shining sea. But in the shadows, slipping in under the veil of a potentially deadly pandemic, another threat loomed. This threat, known as ESG, was not airborne or viral in the traditional sense. This threat was birthed in the imaginations of banks, corporations, and governments, and much like COVID, this threat is going to alter the life of millions of people worldwide.

ESG is an acronym that stands for Environmental, Social (Justice), and (Corporate) Governance. The goal of ESG, as World Economic Forum founder Klaus Schwab stated in Shaping the Future of the Fourth Industrial Revolution, is to utilize investors to move corporations into a more socially progressive direction; moving technologies and businesses away from the current models of doing business to a new stakeholder method of business.

“Entrepreneurs and Investors are the vanguard when it comes to marrying a values-based approach to technological development…It makes sense that thinking about broader social impact at this stage would have significant cascading effects. Investors, on the other hand, have the carrot with which to direct the development of technologies…The values of entrepreneurs and organizational leaders have a tremendous influence on the workplace and how technologies are developed. Leading from the front can transform company culture and prioritize societal values.”

When Coca-Cola, Gillette, Disney, BP, and other multinational corporations act counter to good business practices to advance a political agenda antithetical to the beliefs of most of their consumer base it is an effort to improve the new value-based credit score known as ESG. As corporations respond to investors and the credit score used to determine societal value, they push agendas intended to move the Overton Window and cultural acceptance towards a more progressive agenda.

Proponents of ESG metrics utilize the famous libertarian mantra of private companies being able to do whatever they feel is best for their company and fiduciary responsibilities, but there’s nothing private about ESG.

In March of 2020 the SEC announced they would be forming an ESG Taskforce. The initiative has expanded to requiring publicly traded firms to make detailed disclosures on climate change and greenhouse gas emissions. As with all regulations ESG is being sold as serving the greater good at the cost of business, costing the consumer more money.

Proponents of ESG make a litany of arguments to justify their regulatory dreams:

But they will never address in any detail how ESG metrics will be utilized to make these changes to society. And if ESG is just a tool to help investors make decisions why is the SEC mandating ESG data disclosures? And who is considered an investor? 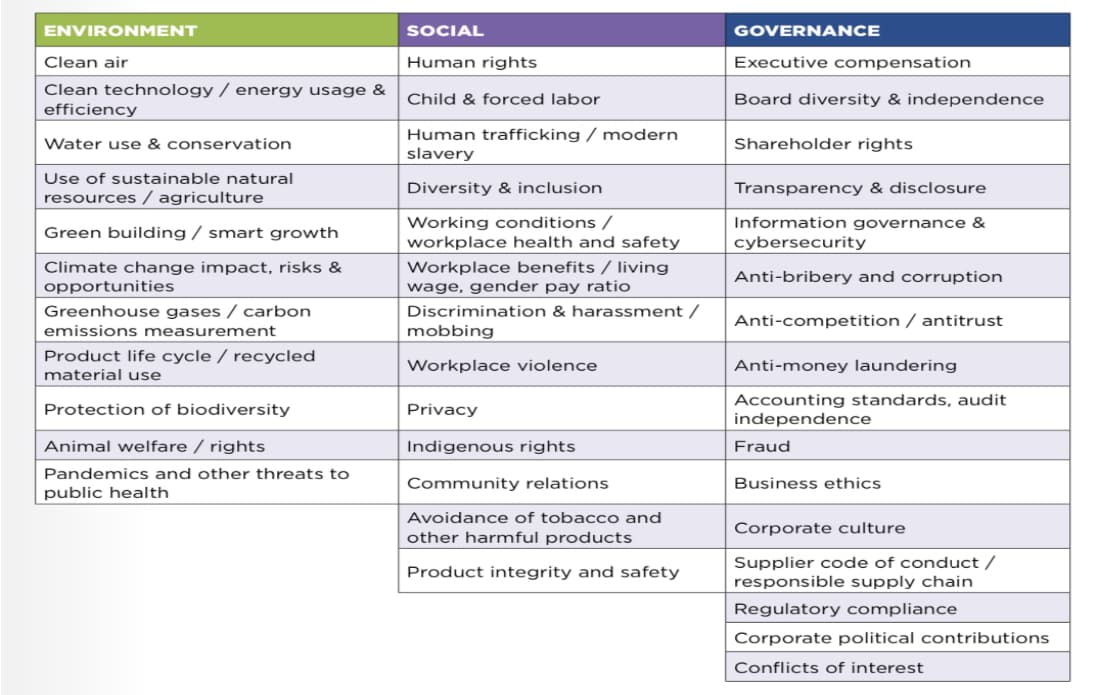 Chart published by the Ethics and Compliance Initiative

According to Investopedia an investor is any person or other entity who commits capital with the expectation of receiving financial returns. Unfortunately for 401k holders, Merrill Edge agrees. In 2018 Merrill Edge added ESG scores to their client’s dashboard, informing their customers whether or not they’re invested in reputationally hazardous companies.

401ks won’t be the only time average citizens find themselves in the crosshairs of ESG. After the trucker convoy in Canada earlier this year their government leveraged financial institutions to freeze the bank accounts of anyone involved in financing or participating in the protest in any capacity.

In 2021 Banks United closed Donald Trump’s accounts after he had left office.

Recently PayPal has cancelled the accounts of many people without explanation, and for further reference Justin Haskins has detailed several instances in which banks have cancelled or frozen bank accounts of politicians accused of wrong-think. Fitch Ratings released a white paper in 2021 detailing how they incorporate ESG to judge individual credit ratings. FICO also has determined that ESG will be taken into account when an individual applies for credit.

What factors could contribute to credit agencies giving you a low ESG score? Do you own a gas run vehicle rather than an electric vehicle? Do you own a firearm? Have you bought ammunition? Do you speak out about the injustices around the January 6 riot? Do you buy Bitcoin? Are you invested in an oil and gas company? Are you openly opposing the agenda to introduce children to the transgender lifestyle? Do you live in a red state? Do you grow your own food? What is your career?

All of these factors and more could lead to a situation where you find yourself being refused credit due to ESG.

As corporations, financial institutions, and governments around the world have introduced ESG standards many people and states have come out against ESG. Several of these states have introduced anti-ESG legislation to protect average Americans from these insane regulatory practices that are meant to advance an agenda.

In response, S&P Global has introduced a plan to track and maintain ESG scores for states. This will penalize states by strong-arming businesses into leaving states with bad ESG scores. If a corporation refuses to flee, they will be excluded from capital, loans, and resources. This will put an overwhelming burden on the people of the states that work for or depend on the corporations targeted.

And that is the plan.

In the past being business friendly—low taxes and minimal regulation—was a benefit to a state’s economy.

Under the rules of ESG the most regulatory happy state sets the rules for everyone.

If Hungary sets specific standards that are stricter than every other nation all corporations adhere to their standards, or they do not do business in Hungary. This may seem relatively unlikely, but in the world of virtue signaling this is how the dominoes fall. Hungary mandates stricter requirements than every other state, and, in an attempt to not be outdone by Hungary, other countries adopt similarly strict ESG requirements. A corporation may not be afraid of losing Hungarian business, but Hungarian, French, British, and Spanish business is a segment of the population worth concerning yourself with.

All hope is not lost. ESG is certainly an effective way for governments to control business and personal actions by weaponizing the financial industry, but as more people become aware of the evils of ESG, how it effects prices, the supply chain, jobs, and business they will become more and more outspoken about its consequences. Though the threat is global, the fight is local. Drawing attention to the ESG agenda is extremely important. The subject must be broached at the local levels of government. Legislation stopping the creep of regulatory capture and the discriminatory policies of multinational corporations must continue; all the while we should be actively seeking out startups and established corporations opposed to ESG before the war on our liberty is complete.

Featured image is from TLI