in Main, Opinion, Politics & Government
Text Size: A A A
0

Well, in that mold we see this week all the top alternative sites are reporting the SUNY professor claiming pedophilia is OK, but none of them are seeing it for what it is. Mike Adams at NaturalNews ran an article today revealing this guy, Stephen Kershnar (Jewish, of course), a professor of ethics and libertarian philosophy, actually comes out of West Point and the Air Force, where he also teaches and lectures. That is the biggest red flag possible, since we have seen the Air Force was the main player in the January 6 false flag, even above CIA or FBI. We have seen Air Force bases as the focal points of hundreds of false flags over the decades, including the fake serial killers. We have seen that all military bases now have large psychological operations units, in which many Intelligence officers are assigned year-round duty manufacturing events. We have seen that there are literally millions of Intelligence agents and assets working for the various alphabet agencies, in and out of military, and that they have huge budgets to do whatever is necessary to destabilize us domestically. They do this mainly by creating fear via an endless line of fake events. Well, this story of the SUNY professor is just one more fake event. It is pretty obvious this jerk was assigned this script as part of his duties, the point of which is blackwashing the left. They want you to think this is what the left believes.

As I have reminded you, it isn’t.

Liberalism has nothing to do with promoting pedophilia, it pretty much goes without saying. It has nothing to do Satanism. It has nothing to do with trannies. It has nothing to do with promoting homosexuality or critical race theory or fake social justice or climate change or BLM or Antifa or anything else now making headlines. LOOK IT UP! Liberalism, like republicanism, was originally about protecting normal people from the very rich. It was connected to the Enlightenment, which was against the divine rights of kings, against entrenched aristocracies, and against government without representation. By the original definitions, it was the conservatives who were for all that, since they were Tories—King’s Men. Conservatives wished to conserve. . . the Old World Order, which was the hegemony of the already wealthy. Ironically, the New World Order, like the Great Reset, is a return to the Old World Order, where the wealthy had everything and you had nothing. You have to understand history if you are ever to understand how you have been flipped. All the original definitions have been turned upside down, and they want to turn you into a conservative. To do that, they have to create their own fake liberals and make them look as awful as possible.

That is what this guy Kershnar is. He is a liberal they created in the dungeons of the Air Force. They sat around some big table and said to themselves, “OK, gentlemen, how do we make this guy look as unappealing as possible?” Pedophilia and Satanism are their go-to methods right now, since they have found these get the biggest reactions from normal people like you. So they have created these people for you to hate on. First they poll you, to find out what you find most disgusting, then they put together these people like Kershnar to push all your buttons. I tell you they are laughing about it right now. They think they have you so tied up in knots. They think they can make you dance like a marionette, because they always have. It is the same thing they did to the hippies back in the 1960s.

The hippies were just young people protesting the Vietnam War, letting their hair grow to protest the short hair worn by the suits and the military, and wearing bright clothing. The hippies weren’t for pedophilia, Satanism, or anything else. So what did the government do? It manufactured Manson and the Tate murders, as well as many other fake events, to blackwash the hippies, making them look like Satanists and murderers. It ran this smear campaign everywhere, from top to bottom, in all markets, at all levels. They even smeared the hippies o n Bewitched, as I noticed recently. Elizabeth Montgomery herself was tapped to blackwash the hippies by calling them smelly, dirty, and unAmerican. This campaign isn’t my imagination: it has since been declassified, with Hoover and Nixon admitting that is what they were doing. Why? To protect the billions being made by military contractors like GE and Lockheed during the war. Well, with a few changes, the same thing is happening today, though the reasons are a bit different.

After decades of strafing the left through these covert ops, the Phoenician Navy decided it wished to destroy it once and for all. Clinton had already moved the Democratic Party way right “toward center”, making it almost indistinguishable from the Republican Party. But even that wasn’t good enough. Although both parties have been for a long time pro-war, pro-CIA, pro-banks, pro-Fed, and pro-rich, that wasn’t good enough for the Phoenician Navy, since grassroots sentiment continued to filter up to them in their hearing, and it was all against them. People had noticed the wealth distribution tipping evermore to the wealthy, and they weren’t happy about it. They were complaining, they were boycotting, they were canvassing, and they were unionizing. This insubordination pissed off the Phoenicians, so they have decided to double-down on us, turning the screw another turn. In this screw the psyops have gone into overdrive, with Intelligence taking over the entire Democratic National Committee and the Party itself and filling it with planned-fail agents, all the way to the President himself.

In this big fake the Democratic Party would be pushed far far left, then exploded on purpose.

It is hoped this explosion will permanently destroy what is left of liberalism in this country. After the 2020-22 period, liberalism will be seen as toxic and radioactive. Literally toxic, since in the literature liberalism will be tied to the fake pandemic and the toxic vaccines. Your children will be taught that the crime against humanity of 2021 came out of a diseased Democratic Party, one that had been corrupted by its own principles. The Phoenicians will do their best to get the blame off Pfizer and big Pharma, off Gates, off Fauci, off the corporations, and onto liberalism itself. In this way they hope to rewrite the history of the Enlightenment and the American Revolution, or bury it completely.

They won’t want you learning or remembering that liberalism had once been the founding principle of this country. They will prefer you think of Critical Race Theory, blacks rioting, tranny swimmers, and pedophile-promoting professors anytime you think of liberalism.

Will you? Well, that is up to you.

I can tell you what is going on, but I can’t make you believe it. 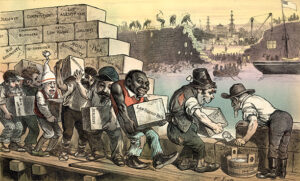