STOP THE BOATS! We (the hardworking citizens of Britain) are being invaded by illegal alien Muslim male freeloaders

in Crime - Terrorism - Corruption, Immigration - Islam - Jihad, Main
Text Size: A A A
0

Amanda who goes by the Youtube name of “Yorkshire Rose” is a citizen journalist live-streaming about UK hotels that are closed to native Brits because they are filled up with illegal alien Muslim invaders. Not surprisingly, she is not welcome at any of these hotels. 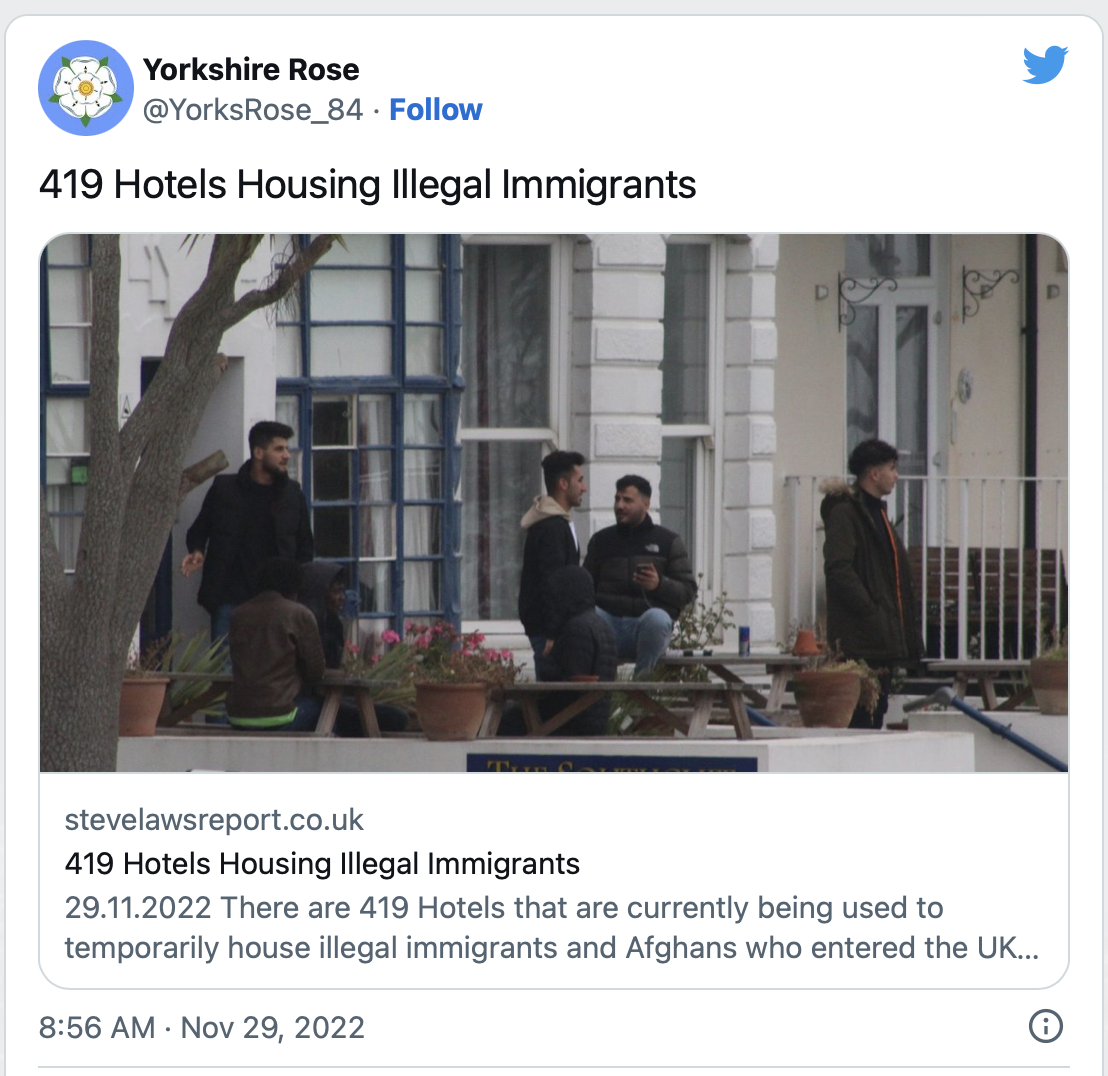 Manchester Mill A hotel receptionist spots Amanda and her male friend wandering around the car park, and asks her to leave. “I’m a local journalist,” she says by way of excuse. Then she turns the conversation around by quizzing the hotel worker. “What have you got to hide? Why don’t you want us in your grounds?”

Amanda spots a couple of Muslim men at a smoking area. She assumes they are illegal aliens  and begins shouting at them. “Hi guys, do you like our country?” The men put their hands over their faces. “I’m just a reporter. Are they looking after you well? Nice food? Why are you covering your faces?”

As she leaves the hotel, Amanda fumes about the government sheltering illegal Muslim invaders who cross the English Channel form the safe country of France. “Why is it all so secretive? How do we know the Taliban, the jihadis are not coming? Anybody could be coming in on those dinghies. We don’t have a clue who these people are. Enough is enough.” One of her livestream viewers agrees. “Go back and torch it,” he says.

Conservative groups have been “monstering” hotels that house illegal migrants like this for at least 18 months. Activists are traveling the country to film themselves harassing staff and shouting at the Muslim freeloaders, egged on by their followers watching on livestreams.

Their videos are a more aggressive version of a format popularized by Nigel Farage. In July 2020, he posted a video onto his YouTube channel in which he turned up at a hotel in Worcestershire, filmed Muslim men on the premises, and tried to book a room before being turned away. His comments in the video now form talking points for activists like Yorkshire Rose. “We’ve no idea who some of these people are,” Farage says in the clip, now viewed seven million times. “We’ve no idea whether some of these might be ISIS. It’s possible, I don’t know.” 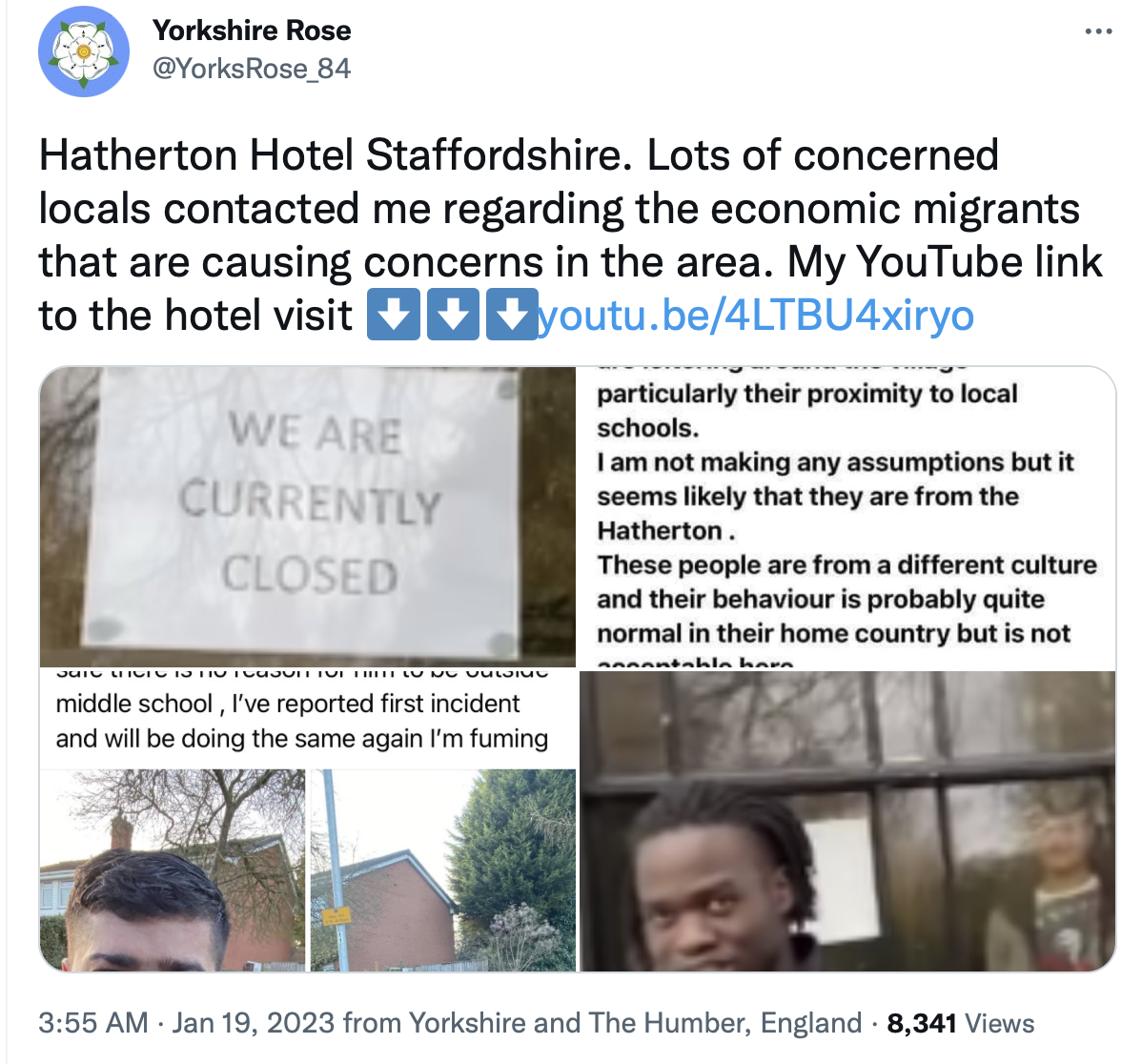 Judging by the fierce reaction that some residents have to their local hotels sheltering refugees, the videos are likely to remain a prominent form of anti-Muslim immigration activism this year.

When one member of a Facebook group called News for South Chadderton shared the information last week that the Victoria Hotel in Oldham was housing migrants, it triggered a heated thread. “It’s a bloody disgrace,” says one comment. “Filthy maggots,” adds another. “We do not need their wars or primitive practices in our country.”

Many of the members claim they had only seen single men in the hotel and warn each other that these refugees are rapists, terrorists, and future enemies in a civil war. Failsworth Street Patrol, a vigilante group that posts news of its night-time activities on Facebook, posted last month that it has been maintaining a “higher presence” around the Victoria Hotel. “Please keep your door and windows locked and keep safe.”

Part of this narrative involves proving that single men, and not families, are being put up in hotels, and showing that these men own nice clothes and smartphones. If the hotels putting up migrants appear in any way to be fancy, the activists take great umbrage. A video that Farage posted in August 2020, in which he toured hotels in the North West in search of migrant guests, he described the “lovely swimming pools” of Daresbury Park in Warrington and the “amazing” grounds” of Chimney House in Sandbach.

Farage became particularly irate after learning that a local charity had organized a trip for illegals to visit Anfield Stadium. He believes this would encourage more migrant-wannabes to undertake the perilous overland journey from Afghanistan to Calais, and then cross the world’s busiest shipping channel in a leaky dinghy, in search of a free tour of Liverpool’s home turf which would otherwise cost £23. “All these people will be sending selfies and pictures back to their countries,” he says. “And the message is: come on down, get into the country. Hotels, forty quid a week spending money, full board, trips to Anfield…It’s stone bonkers.”

Activists like Yorkshire Rose believe that the sheltering of Muslim invaders  in British hotels makes good propaganda material. Just like their videos about the crimes of Muslim sex- grooming gangs, conservatives hope to sway new believers by hammering the hotel issue. That’s why livestreamers will refer to the “injustice” of sheltering Afghans in hotels instead of, for instance, homeless veterans of the armed forces. They will call refugees “economic migrants/freeloaders” to undermine their status as fugitives from the Taliban and portray them as devious foreigners looking to exploit the asylum system for a cushy life in Britain. 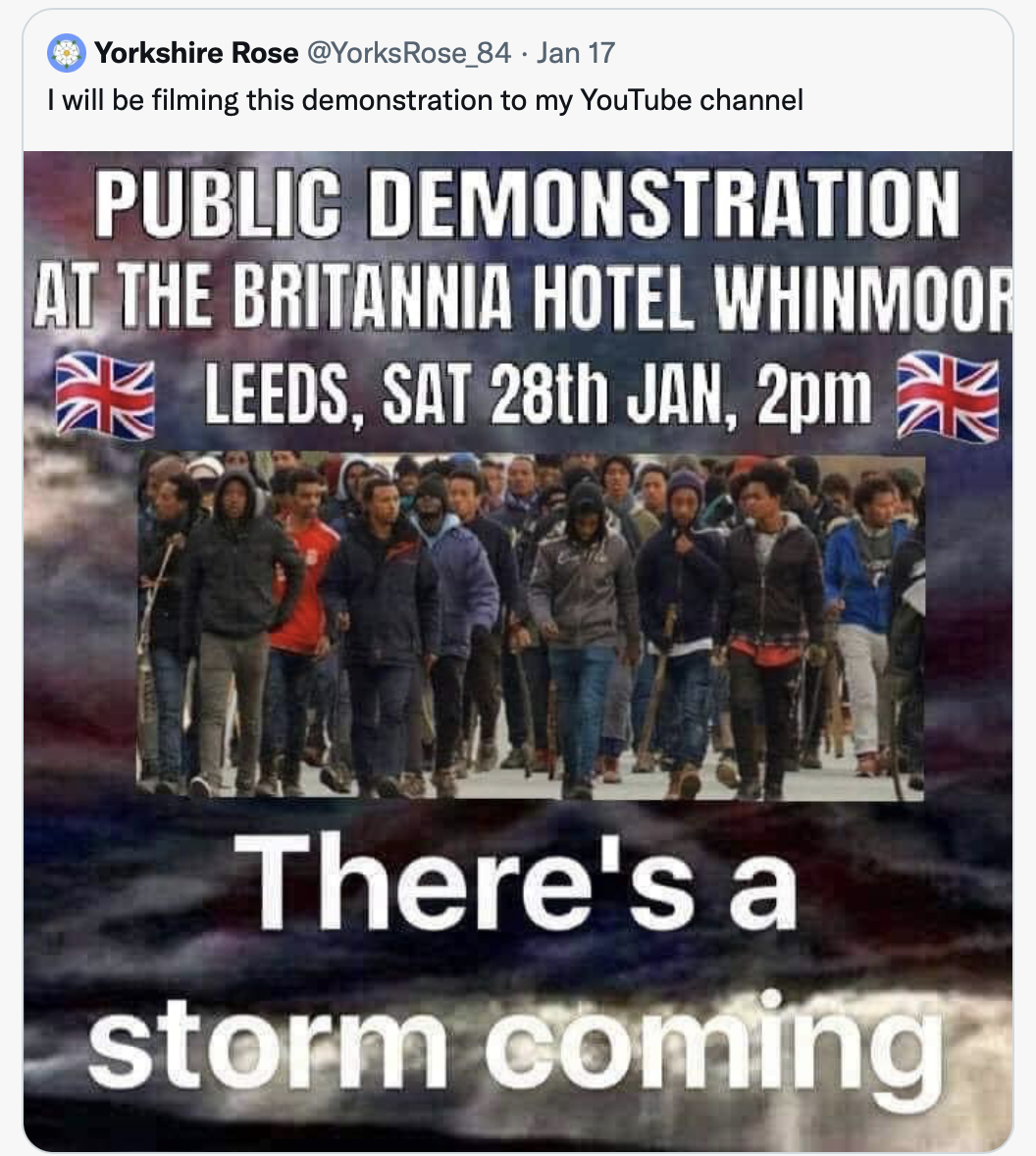 US Finalizing Next Ukraine Military Aid Package At $2.6 Billion