USA: An epidemiologist and professor at Stanford University said Friday that Dr. Anthony Fauci’s credibility “is entirely shot” after revelations from his emails show a reversal on the subject of mask wearing to prevent COVID-19.

“I think he’s been all over the place on masks,” Jay Bhattacharya, a professor of medicine at Stanford said on “The Ingraham Angle.” “There are emails you can find in the treasure trove of emails that have been released where he acknowledged the virus has been aerosolized — well the cloth masks people have been recommending, they’re not particularly effective against aerosolized viruses.

“I really don’t understand his back and forth and his answer made absolutely no sense,” he said.

A trove of Fauci’s emails were released via Freedom of Information Act requests this week, which include a February email in which he advised someone not to wear a mask to the airport.

“Masks are really for infected people to prevent them from spreading infection to people who are not infected rather than protecting uninfected people from acquiring infection. The typical mask you buy in the drug store is not really effective in keeping out virus, which is small enough to pass through the material,” he said, in one of the emails obtained by BuzzFeed News. “It might, however, provide some slight benefit in keep out gross droplets if someone coughs or sneezes on you. I do not recommend that you wear a mask, particularly since you are going to a vey (sic) low risk location.” 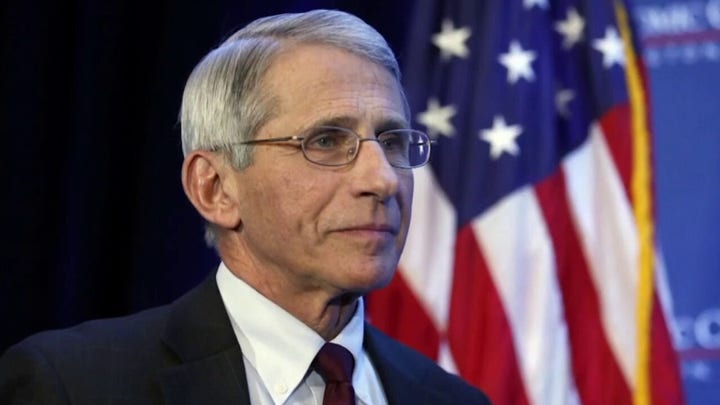 Fauci and other experts later reversed their stances, and mask mandates became common across much of America throughout 2020 and into 2021. Fauci has defended himself, saying his position has changed as the science has changed.

“If we knew then that a substantial amount of transmission was asymptomatic people, if we knew then that the data show that masks outside of a hospital setting actually do work when we didn’t know it then, of course people would have done it, that’s so obvious,” he said on CNN.

But Bhattacharya was skeptical, saying that the facts did not change “a ton.”

“Yes you should change your mind when the science changes, what is that science that changed that convinced him that masks are the most effective way?” he asked.

“The CDC Director Robert Redfield said masks were more effective than vaccines and Dr. Fauci did not contradict him when Dr. Scott Atlas said that was nonsense, which it was,” he said.

“I think his credibility is entirely shot,” he added.

Fauci has been facing increasing pressure from Republicans in particular since the emails were released, with some in the House and Senate calling on him to resign or be fired. But the White House has dismissed the criticism and stood by the doctor, with Biden saying he is “very confident” in Fauci on Friday.