Sharia in action in Indonesia: Woman collapses after receiving 100 lashes for premarital sex

An Indonesian woman collapsed after receiving 100 lashes for premarital sex in the Sharia province of Aceah. Her lover and others were also sentenced to public lashes for “religious transgressions.”

The Islamic criminal code in Aceh “includes morality offenses like gambling, adultery, drinking alcohol, and having gay or pre-marital sex.”

Sharia prescribes numerous human rights abuses and yet is considered divine law in Islam, so the more Islamic a country becomes, the more abusive it becomes. 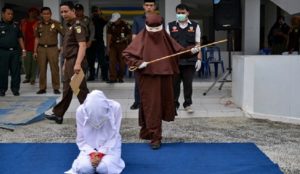 An Acehnese woman collapsed when she was flogged in public on Monday in the city of Lhokseumawe, as she was one of the latest to be punished for religious transgressions in the province.

The woman collapsed after receiving her punishment, which was carried out by enforcers from the province’s Wilayatul Hisbah (religious police), Satpol PP (the Public Order Agency), and witnessed by members of the public.

“[The woman] had to be carried away from the location because she fainted after receiving 100 lashes,” Lhokseumawe Satpol PP and Wilayatul Hisbah Chief Zulkifli said.

Zulkifli added that the woman eventually came to and was doing fine (aside from the pain from the flogging, presumably).

Flogging is a common punishment for a range of offenses in the deeply conservative Aceh (the only province with special autonomy to enforce sharia law), including adultery, drinking alcohol, and having gay or pre-marital sex…..