in Disasters - Survival - Prepping, Main
Text Size: A A A
0

The Russian Orthodox Church issues apocalyptic warning: “Some “madmen” believe Russia could be defeated, but this could trigger the end of the world” Patriarch Kirill has said.

Below these is two interesting articles by Russia Today.

Any attempts to destroy Russia could spell disaster for the entire world, the head of the Russian Orthodox Church, Patriarch Kirill, warned on Thursday.

Speaking after a religious service marking the Orthodox Christian holiday of Epiphany, the primate claimed that both the international community and Russia are facing “very huge threats.”

According to Patriarch Kirill, the root of the problem is that some “madmen” believe that Russia, which “has powerful weapons and is populated by extremely strong people… who had never given in to an enemy and had always emerged victorious, could be defeated under the current circumstances.”

Neither would it be possible to “impose on them certain values that cannot even be called values, so that they would be like everyone else and obey those who have the power to control most of the world,” he noted. 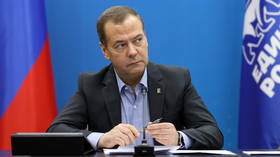 “We pray to the Lord so that he enlightens those madmen and helps them understand that any desire to destroy Russia will mean the end of the world,”he added.

The Patriarch’s remarks echo a statement by former Russian president Dmitry Medvedev on Thursday, who warned those countries wishing to see Moscow defeated in Ukraine that nuclear powers such as Russia had “never lost a major conflict on which their fate depended.” Should such a nation lose a conventional war, it could trigger a nuclear conflict, he added.

Earlier this month, the head of the Russian Church appealed to both Moscow and Kiev’s forces to establish a truce in the run-up to and during Orthodox Christmas on January 7 to give the faithful a chance to attend religious services.

Hours later, the proposal was supported by Russian President Vladimir Putin, who ordered Moscow’s troops to stand down for 36 hours. The ceasefire, however, was rejected by Kiev, with Ukrainian officials dismissing the offer as “hypocrisy” and a military ruse.

Billionaire Elon Musk urged caution on Friday following reports that the US is changing its stance on whether it should assist Ukraine in attacking Russia’s Crimean Peninsula.

Earlier this week, the New York Times reported, citing sources, that Washington is starting to concede that Kiev needs to have the ability to strike deep into Russian territory, even if this entails the risk of escalation.

US officials are said to be “discussing with their Ukrainian counterparts the use of American-supplied weapons, from HIMARS rocket systems to Bradley fighting vehicles, to possibly target … Crimea.” The peninsula overwhelmingly voted to join Russia in 2014 following the Maidan coup in Kiev.

Musk responded to a Twitter user who posted a link to the Times article by saying: “I am super pro Ukraine, but relentless escalation is very risky for Ukraine and the world.”

This is not the first time the tycoon has weighed in on the Ukraine conflict. In October, Musk came up with a peace plan to end the hostilities between Moscow and Kiev. According to his proposal, Russia should “redo elections of annexed regions under UN supervision,” with Moscow withdrawing from these areas if this is what the people want.

He was referring to the Donetsk and Lugansk People’s Republics, as well as Kherson and Zaporozhye Regions, which overwhelmingly voted to join Russia last year.

However, the Twitter CEO also suggested that Crimea should remain part of Russia, sparking outrage in Kiev.Ukraine’s former ambassador to Berlin, Andrey Melnik, told him to “f**k off.”

Later, Musk noted that Russia views Crimea as an integral part of its territory, and attempts to seize it by a foreign power could trigger a nuclear war. “If Russia is faced with the choice of losing Crimea or using battlefield nukes, they will choose the latter,” he wrote at the time.