Number of Deaths Reported After COVID Vaccines Jumps by More Than 2,000 in 1 Week, According to VAERS

Data released today by the Centers for Disease Control and Prevention (CDC) included 9,049 reports of deaths, across all age groups, following COVID vaccines — an increase of more than 2,000 compared with the previous week. The data comes directly from reports submitted to the Vaccine Adverse Event Reporting System (VAERS).

VAERS is the primary government-funded system for reporting adverse vaccine reactions in the U.S. Reports submitted to VAERS require further investigation before a causal relationship can be confirmed.

Every Friday, VAERS makes public all vaccine injury reports received as of a specified date, usually about a week prior to the release date. 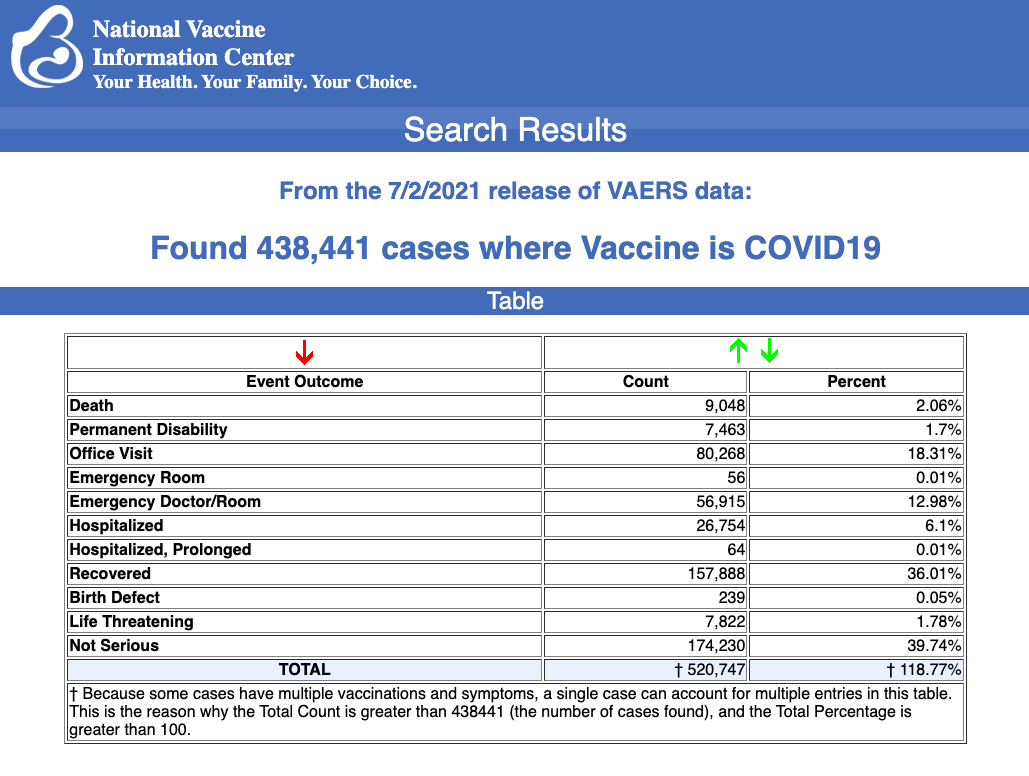 As The Defender reported today, U.S. federal health agencies and the maker of one of the most popular COVID vaccines are publicly at odds over if or when fully vaccinated people will need a third “booster” dose.

Pfizer announced Thursday it will seek Emergency Use Authorization from the FDA in August for a third dose of its COVID vaccine. The drugmaker predicted those who have been fully vaccinated will need a booster shot within six to 12 months of receiving their second dose of the Pfizer vaccine.

But the U.S.Department of Health and Human Services (HHS) hours later issued a joint statement by the FDA and Centers for Disease and Control and Prevention (CDC) saying, “Americans who have been fully vaccinated do not need a booster shot at this time.”

The HHS statement did not explicitly mention Pfizer, but said “a science-based, rigorous process” headed by the CDC, FDA and the National Institutes of Health would determine when or whether boosters were necessary.

Pfizer’s assertions about the need for boosters contradict other research, and several experts pushed back against the claim.

“There’s really no indication for a third booster or a third dose of an mRNA vaccine, given the variants that we have circulating at this time,” Dr. Céline Gounder, an infectious disease specialist at Bellevue Hospital Center in New York, told the New York Times. “In fact, many of us question whether you will ever need boosters.”

“No one is saying we’ll never need a booster, but to say we need it now and give the public the impression the vaccines are failing and something needs to be done as a matter of urgency. … The time isn’t now. The decisions that are going to be made will be made by federal agencies.”

Pfizer and BioNTech are developing a version of their COVID vaccine that targets the Delta variant, The New York Times reported this week. The companies expect to begin clinical trials of the vaccine in August.

Pfizer and BioNTech reported — based on their own studies that have not been published, nor peer-reviewed, according to the Times — that a booster given six months after the second dose of vaccine increased the potency of antibodies against the original virus and the Beta variant by five- to tenfold.

Vaccine efficacy may decline six months after immunization, the companies said in a news release, and booster doses may be needed to fend off virus variants. The vaccine makers said they will submit their findings to the FDA in the coming weeks, a step toward gaining authorization for booster shots.

Concerns around COVID vaccines and heart inflammation, especially in young males, continue to circulate. But according to an update posted today on the CDC website, the agency’s researchers have concluded the benefits of the vaccine outweigh the risks of myocarditis after vaccination.

European drug regulators today announced they also have found a “possible link” between a “very rare heart inflammation” and the Pfizer and Moderna vaccines, but sided with U.S. regulators, saying they also believe the benefits of the shots outweighed any risks.

Meanwhile, The Defender continues to report on teens who have experienced heart issues after taking the vaccines — including a 17-year-old student who developed symptoms of a heart condition about one week after his first dose of Pfizer’s COVID and subsequently was diagnosed with a heart condition.

The teen’s father, Fabio Berlingieri, told “Fox & Friends” his son had COVID and recovered, but was required to get the vaccine in order to play soccer.

Fox News medical contributor Dr. Nicole Saphier, who appeared in the interview with Berlingieri, said the way the New York Times and the CDC are presenting the data regarding the adverse effects of vaccines in adolescents is “irresponsible.”

“They cherry-pick the way they present the data. It’s an all or none approach. They say either adolescents are fully vaccinated or every single one of them is going to get COVID-19. That’s the way they are balancing it right now,” Saphier said.

Saphier said more weight should be given to potential adverse effects, like myocarditis and other heart inflammation issues, when deciding who should be vaccinated. She also encouraged the FDA to look closer at vaccines before recommending a universal policy.

Hundreds injured by COVID vaccines turn to GoFundMe for help

As reports of adverse events to COVID vaccines continue to grow in number, those injured by the vaccines are struggling to pay their medical bills.

As The Defender reported July 8, more than 180 people injured by COVID vaccines have had to turn to GoFundMe for help with large medical bills and other expenses, including Emma Burkey — the high school senior who underwent three brain surgeries due to blood clots after receiving J&J’s COVID vaccine.

People facing huge medical bills after being injured by COVID vaccines have few options, beyond what their own health insurance covers. That’s because under federal law, vaccine makers are shielded from liability.

Those injured by COVID vaccines can only file a claim for compensation through the Countermeasures Injury Compensation Program (CICP), run by HHS.

Since June 1, the CICP reported 869 pending cases but offered no further information. Since the program’s inception in 2010, only 29 claims have been paid, with an average payout of around $200,000. The other 452 claims (91.4%) were denied. Ten claims won approval but were deemed ineligible for compensation.

Making no mention of any safety concerns related to the vaccines, President Joe Biden this week announced plans to ramp up the federal government’s efforts to get more Americans vaccinated under a new “door-to-door” program.

As The Defender reported this week, under Biden’s program, the White House will deploy teams of officials from the CDC, Federal Emergency Management Administration and other federal health agencies. Biden suggested the unique door-knocking approach was needed now that “we are continuing to wind down the mass vaccination sites that did so much in the spring.”

Biden said the administration will also “step up efforts to get vaccines to doctors who serve younger people so that adolescents ages 12 to 18 can get vaccinated and — as they go for back-to-school check-ups or getting ready for their physicals they need for fall sports.”

Biden cited concerns over the COVID Delta variant, which he said is more transmissible and has forced some European countries to return to lockdowns. He did not mention any of the safety concerns previously noted by the CDC and FDA, including blood clots and heart inflammation, associated with the vaccines.

Number of cases among fully vaccinated continue to climb

Nearly 30 people in Louisiana who were fully vaccinated against COVID died from the virus, according to the Louisiana Department of Health (LDH). Dr. Joseph Kanter, LDH state health officer and medical director, said 27 people between the ages of 28 and 93 have died with COVID more than two weeks after being fully vaccinated.

According to the San Francisco Examiner, more than 7,550 breakthrough cases have been reported, through June 23, in Californians who were fully vaccinated. Most cases were minor, but 62 people died from COVID, according to the California Department of Public Health.

According to the CDC website, “the CDC follows up on any report of death to request additional information and learn more about what occurred and to determine whether the death was a result of the vaccine or unrelated.”

On March 8, The Defender contacted the CDC with a written list of questions about reported deaths and injuries related to COVID vaccines. After repeated attempts, by phone and email, to obtain a response to our questions, a health communications specialist from the CDC’s Vaccine Task Force contacted us on March 29 — three weeks after our initial inquiry.

On May 19, a CDC employee said our questions had been reviewed and our inquiry was pending in their system, but would not provide us with a copy of the response. We were told we would be contacted by phone or email with the response.

We have contacted the CDC numerous times since and were told nobody knew the specialist from the agency’s Vaccine Task Force who contacted us in March, and our request was still pending in the system. It has been 123 days since we sent our first email inquiring into VAERS data and reports and we have yet to receive a response.

ARE ALL PEOPLE IN CALIFORNIA COMPLETE MORONS? (VIDEO 8 min)