New HIV super-strain is found in the Netherlands: Highly infectious variant makes people ill twice as quickly and has been spotted in at least 109 people

NETHERLANDS/UK: A new super-mutant HIV strain that makes infected individuals ill twice as fast as current versions of the virus has been detected in the Netherlands.

The new mutant — called the VB variant — has infected at least 109 people, according to a study by Oxford University.

The strain damages the immune system and weakens a person’s ability to fight everyday infections and disease faster than previous versions of the virus.

It means those who catch this strain could develop AIDS more quickly.

The VB variant also has a viral load between 3.5 and 5.5 times higher than the current strain, meaning infected people are more likely to transmit the virus to others.

However, after starting treatment, those with the variant have a similar immune system recovery and survival rate to those infected with other HIV strains.

But the researchers warned the rapid health decline after catching VB means early detection and treatment is ‘critical’.

More than 100,000 Britons and 1million Americans are thought to be living with HIV.

Independent experts have said the finding is nothing to panic about. The analysis found VB arose in the 1980s and has been declining since 2010.

An analysis of genetic patterns suggests VB first arose during the late 1980s and 1990s in the Netherlands. 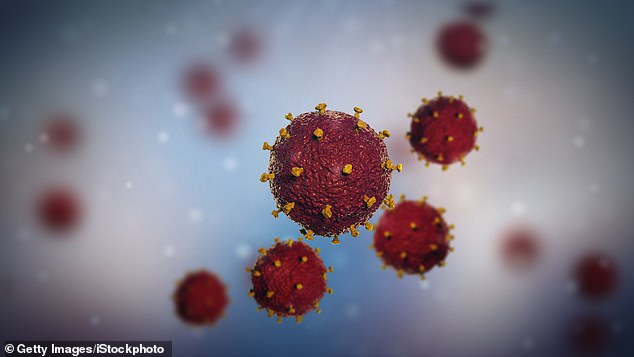 The VB variant, which has already been detected in 109 people in the Netherlands – damages the immune system faster, meaning those with the virus could develop AIDS faster. Pictured: graphic of a HIV virus

The discovery, published in the journal Science, is the result of an international collaboration between the University of Oxford’s Big Data Institute and the Dutch HIV Monitoring Foundation.

The team, which collects HIV samples from across Europe and Uganda, detected 17 cases of the new strain.

HIV (human immunodeficiency virus) is a virus that damages the cells in your immune system and weakens your ability to fight everyday infections and disease.

AIDS (acquired immune deficiency syndrome) is the name used to describe a number of potentially life-threatening infections and illnesses that happen when your immune system has been severely damaged by the HIV virus.

While AIDS cannot be transmitted from 1 person to another, the HIV virus can.

There’s currently no cure for HIV, but there are very effective drug treatments that enable most people with the virus to live a long and healthy life.

With an early diagnosis and effective treatments, most people with HIV will not develop any AIDS-related illnesses and will live a near-normal lifespan.

Just like Covid, HIV mutates very quickly but the vast majority of these changes make no difference to the nature of the virus.

Two of the cases were in Switzerland and Belgium, while 15 VB variant samples were taken from individuals in the Netherlands.

The team examined positive samples from more than 6,700 people in the country to find out how widespread it ix.

This process identified a further 92 people with the variant, from all regions of the Netherlands, bringing the total of confirmed cases to 109. But the true number is likely to be higher.

The team examined sequenced HIV samples from a global database but did not detect other cases. However, they said there are ‘probably at least a few’ more international cases of the strain.

By analysing genetic variation among the samples, the team estimated that the VB variant first emerged in the late 1980 or 1990s in the Netherlands.

They found it spread faster than other strains during the 2000s before declining since 2010 in response to treatment becoming widely available.

It is unclear how the variant emerged, but the team said one option could be an unusually long infection in one person who did not undergo treatment to stop the virus from replicating and evolving.

The scientists do not yet know how the variant is more transmissible and damaging to the immune system.

People infected with the strain had the same characteristics — including age and sex — as other people living with HIV in the Netherlands, the researchers noted.

The experts said further studies into the variant’s mechanisms could reveal new parts of the virus to target through drugs.

Dr Chris Wymant, a senior researcher in statistical genetics at Oxford University and lead author, said: ‘Before this study, the genetics of the HIV virus were known to be relevant for virulence, implying that the evolution of a new variant could change its impact on health.

‘Discovery of the VB variant demonstrated this, providing a rare example of the risk posed by viral virulence evolution.’

Professor Christophe Fraser, an expert in pathogen dynamics at the university and study senior author, said: ‘Our findings emphasise the importance of World Health Organization guidance that individuals at risk of acquiring HIV have access to regular testing to allow early diagnosis, followed by immediate treatment.

‘This limits the amount of time HIV can damage an individual’s immune system and jeopardise their health.

‘It also ensures that HIV is suppressed as quickly as possible, which prevents transmission to other individuals.’

Twitter Engineer Confesses: ‘We Censor Conservatives Because We Hate America’