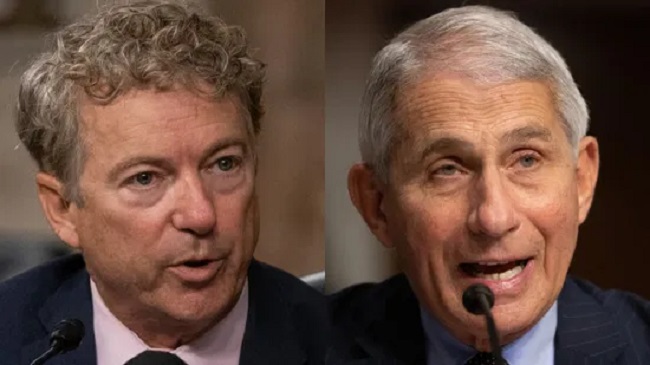 Sign the #UNRIG petition to investigate and prosecute Anthony Fauci for his apparent May 11, 2021 perjury before Congress. Let your representatives know the time to act is now.

Then, check out the national #UNRIG tour headed to a city near you to join Robert David Steele in the fight to take back your government from the globalist elite that has hijacked it.

In his May 11, 2021 testimony to Congress, NIH Director Anthony Fauci likely perjured himself when questioned on whether he oversaw funding of so-called gain-of-function research that in all probability resulted in COVID-19, the greatest public health catastrophe in modern history.

Perjury is a federal criminal offense under 18 U.S. Code § 1621 punishable by up to five years in prison.

For a year and change, the corporate media has subjected the American people to nothing short of worship of public health demigod Anthony Fauci.

The evidence, though, paints a less flattering picture of Anthony Fauci. In the aforementioned testimony, and elsewhere, Fauci has shown his true colors as a political operative rather than an honest public servant.

Here is a verbatim breakdown of the May 11th exchange between Fauci and Sen. Rand Paul in which Fauci – as the emerging evidence bears out — likely committed perjury:

These are demonstrably false claims. Through “non-profit” EcoHealth Alliance, in his capacity as Director of NIH, Anthony Fauci did, in fact, funnel money to the Wuhan Institute of Virology for a five-year gain-of-function research program after the practice was banned in the United States.

And, contrary to Fauci’s claims, what he funded through NIH grants — according to a 2014 memorandum from elite scientists of the Cambridge Working Group — indeed constituted gain-of-function research and, critically, that such research represented a grave public health threat:

“Accident risks with newly created ‘potential pandemic pathogens’ raise grave new concerns. Laboratory creation of highly transmissible, novel strains of dangerous viruses, especially but not limited to influenza, poses substantially increased risks. An accidental infection in such a setting could trigger outbreaks that would be difficult or impossible to control.”

Fauci recklessly ignored these warnings. When the federal government outlawed gain-of-function research in 2014 on US soil on the legitimate basis that the risks outweighed the potential benefits, he simply offshored the illicit research to the Wuhan Institute of Virology – despite a history of lab leaks of dangerous viruses from Chinese labs.

Fauci himself knew this type of research to be gain-of-function, and explicitly used the term as he discussed the potential of a lab leak triggering a pandemic in a 2012 paper he authored:

“The potential benefits and risks of these experiments must be discussed and understood by multiple stakeholders… In an unlikely but conceivable turn of events, what if that scientist becomes infected with the virus, which leads to an outbreak and ultimately triggers a pandemic?”

The true likely origins of the SARS-CoV-2 virus have finally pierced the mainstream. In all likelihood – with the evidence accumulating by the day – the Wuhan Institute of Virology — either intentionally or through negligence — engineered and leaked the virus using Fauci’s grant money.

To summarize, if the evidence continues to bear fruit, this means that Anthony Fauci oversaw the funneling of millions of dollars through “non-profit” group Eco-Health Alliance into a Chinese virology lab after such research was deemed too dangerous to conduct inside the US and outlawed.

The motive to perjure himself before Congress is obvious: admitting his own complicity in the gain-of-function research he oversaw funding for in Wuhan, China would implicate him personally in the pandemic, potentially criminally. At the very least, it would end his career – as it should.

The economic and human toll of the COVID-19 pandemic and ensuing lockdowns by the numbers:

Fauci’s funding of gain-of-function research in Wuhan, China was negligent and possibly criminal. Further investigation into his – and other NIH and CDC staffers’ – knowledge of the research and/or leak that triggered the pandemic is needed.

In the meantime, US Attorney General Merrick Garland has within his power the capacity to prosecute Anthony Fauci for his aforementioned probable perjury as well as the evidence to do so.

Sign the #UNRIG petition to force the issue. And head over to the #UNRIG site to join the national tour to reclaim American governance by and for the people.