INDIA: “The Indian Union Muslim League (IUML) has moved the Supreme Court challenging the Centre’s notification inviting non-Muslims belonging to Afghanistan, Bangladesh and Pakistan and residing in 13 districts in Gujarat, Rajasthan, Chhattisgarh, Haryana and Punjab to apply for Indian citizenship.” The invitation to these countries’ non-Muslims constituted the Citizenship Amendment Act (CAA). The CAA fast-tracked Indian citizenship for Christian, Hindu, Sikh, Buddhist, Jain, and Parsi immigrants from Afghanistan, Pakistan and Bangladesh who arrived in India before 2015.

The CAA lead to unrest from Muslims when it was passed in December 2019. Mass protests led to violence across India, and Al-Qaeda called for Muslims in India to wage jihad from within. A relentless propaganda barrage against India came from Pakistan, Kuwait and across the Muslim world. Muslims also appealed to the Organization of Islamic Cooperation, with complaints against India over “Islamophobia.” This reaction, in fact, proved exactly why infidels need rescuing from the wrath of Islamic supremacists and jihadists everywhere.

The reason for the so-called “discriminatory,” “Islamophobic” CAA was because of Muslim persecution of religious minorities in those countries; they were being offered a level of safety in India. Note, by contrast, that open-door immigration policies in the European Union have led to mass Muslim migration, and are now causing a nightmare during ongoing coronavirus lockdowns, as mostly Muslim economic migrants have steadily crashed the borders of European countries illegally (and entered the UK via the English Channel). But in the early days of the war in Syria, which created genuine refugees, Muslim refugees in UN camps attacked and terrorized Christians, and the Christians could not escape. It’s about time that some country thought of the minorities who are victims of jihad and Sharia oppression. India should be applauded for doing so. 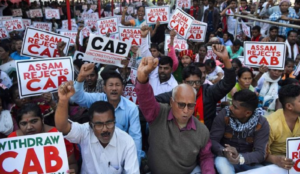 The interim application argued that the Centre is trying to circumvent the assurance given to the apex court in this regard in the pending petition filed by the IUML challenging the constitutional validity of the provisions of the Citizenship (Amendment) Act (CAA), 2019.

The CAA grants Indian citizenship to non-Muslim minorities – Hindu, Sikh, Buddhist, Jain, Parsi and Christian – who migrated to India from Afghanistan, Pakistan and Bangladesh till December 31, 2014, following persecution over their faith.

The fresh plea said the Union home ministry on Friday issued a notification to this effect for immediate implementation of the order under the Citizenship Act 1955 and Rules framed under the law in 2009 even though the rules under the CAA enacted in 2019 are yet to be framed by the Ministry of Home Affairs is manifestly illegal and runs counter to the provisions of the Act.

“However, the respondent Union, in a roundabout way, and in an attempt to circumvent the assurance given to this court, have sought to implement their malafide designs envisaged under the Amendment Act through the recently issued order dated May 28,” the plea said.

IUML submitted that if the Centre’s notification is implemented and citizenship is given to persons on the basis of their religion, and, thereafter, if this court strikes down the Amendment Act and Rules, whereby the act of providing citizenship on the basis of religion is declared void, “Then, to take back the citizenship of these persons, granted pursuant to the present order, will be a herculean task and would be near impossible to implement. In the event the said exercise is conducted, it would render the entire batch of writ petitions (challenging CAA) as infructuous,” the plea said.

The petition has sought directions to the Centre to stay any further proceedings pursuant to the May 28 order issued by the Union of India, Ministry of Home Affairs till such time the plea challenging CAA is pending……