CANADA: On Thursday September 2, in a show of “united non-compliance,” hundreds of police officers and citizens held a rally in front of Toronto Police Service Headquarters in downtown Toronto, to protest against vaccine passports and mandates.(Article by Jack Bingham republished from LifeSiteNews.com)

“Look at this crowd today,” Chris Sky – one of the de facto leaders in Canada’s opposition to dictatorial COVID measures – told the cheering crowd.

“We have the people, aligned with the police, against the draconian government, and what do we call that everybody?” Sky asked.

LifeSiteNews attended the rally and has exclusive photo and video coverage of the massive turnout of freedom fighting police officers and citizens.

“Father God, we thank you for fighting our battles for us, amen” reads another.

In a display of faith, one of the rally members held a 5-6-foot-tall crucifix above the crowd, and many others displayed similarly sized crosses as icons of faith and hope for all those in attendance. 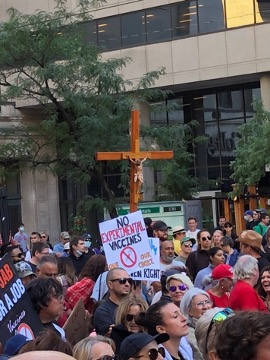 Talking about the government’s continued plan to dismantle the rights of Canadians, which includes Premier Doug Ford’s installation of a vaccine passport system in Ontario, Sky outlined the timeline of events from his perspective, referencing public statements he has made.

“[18-months ago] the mere words ‘vaccine passport’ made me a ‘crazy conspiracy theorist’,” said Sky.

“Now that it’s here, even six weeks ago [when] Doug Ford said we’re not gonna do a vaccine passport, I told you all that’s called ‘pacification followed by predictive programming’,” he added.