USA: Although the biggest news of the week is undoubtedly the US Supreme Court overturning Roe vs. Wade, there’s another bombshell that quietly broke two days ago — one that will have a vastly more profound devastating consequences on the world than any decision coming from SCOTUS.

Russian President Vladimir Putin announced that BRICS nations are going to roll out a new alternative to the US dollar’s global reserve currency status. As reported by IndiaTimes.com:

According to the Russian president, the member states are also developing reliable alternative mechanisms for international payments. Earlier, the group said it was working on setting up a joint payment network to cut reliance on the Western financial system. The BRICS countries have been also boosting the use of local currencies in mutual trade.

But this is only the beginning of the bombshell here.

We also know from industry sources that “Project Sandman” refers to a group of over 100 countries that plan to simultaneously denounce the US dollar as a global reserve currency. This will likely take place on a Sunday evening, USA time, says Andy Schectman, the CEO of Miles Franklin (a gold and silver dealer). He told me this in an interview recorded yesterday, to be aired soon.

The new replacement currency will be powered by blockchain and backed by gold, which is why member nations have been rapidly stockpiling gold supplies in anticipation of the big announcement. When that announcement comes, nations that represent nearly 75% of the world’s population will simultaneously denounce the US dollar and roll out a gold-backed, blockchain-audited international currency system that will instantly become the world’s currency choice for free trade and a store of value.

The dollar, backed by nothing but more money printing and incompetent political leadership, will collapse toward zero. Virtually overnight, goods and services sold in America will increase in price by 1000%. And that’s only the beginning: The dollar will continue to lose value by the hour as the world’s holders of US Treasury debt and dollar currency dump it all at any price.

Those holding dollars will lose everything.

The United States government will quickly collapse in parallel with the collapse of the dollar and the US central bank. There will be no money to pay military troops or pay off corrupt government officials. All government salaries and pensions will be effectively halted. The great neocon empire of debt, lies and death will implode so rapidly that people will be psychically shocked and physically unprepared.

Russia, China and India will emerge as the economic leaders of the world, and the US empire will cease to exist. The former United States of America will be broken into regional nation states, divided largely among political lines with the satanic, anti-American Left seizing control of the coasts, and conservative, pro-America, pro-liberty, pro-Constitution groups dominating the rest of the country. Expect a very real civil war to ensue, with massive casualties.

Russia knows that it can defeat America simply by joining the world’s efforts to declare America’s dollar currency to be null and void. No nuclear war is necessary. America it already highly vulnerable to this sort of collapse due to the nation’s massive debt and spending addictions. Russia and China are merely sucking the air out of America’s collapsing currency, knowing that economic gravity will do the rest. 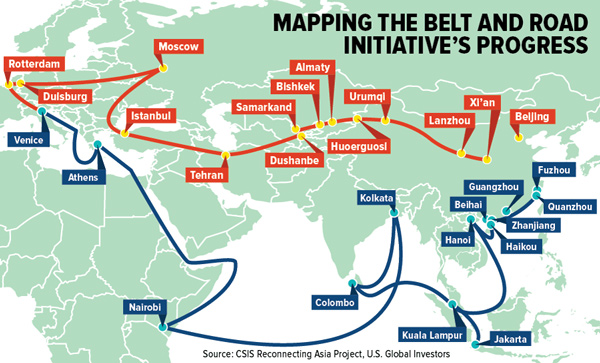 This Belt and Road Initiative will speed trade among member nations, and it will use China’s new “digital yuan” currency backed by gold and audited by blockchain technology. (Please watch my upcoming interview with Andy Schectman for a lot more on this, as Andy has been following the topic quite extensively.)

Notice what’s missing from this map? America and Western Europe.

That’s because America — the military and economic bully of the world — isn’t welcomed by other nations. America doesn’t play nice. America bombs anyone it wants while weaponizing the SWIFT system to punish its political enemies, and now that the world has come to realize the dollar is a weapon rather than a free trade currency, nobody wants anything to do with America from here forward.

The economic sanctions against Russia were the last straw for the dollar, it turns out. And the USA has nothing left to back its currency: Not manufacturing, not labor, not agricultural output, and not even gold in the vaults. The USA no longer has fair and free elections and no longer has freedom of speech. On top of that, the USA has political prisoners rotting in jails in DC while the FDA harvests organs from aborted human babies to use for medical experiments. In other words, the USA occupying illegitimate government, under demonic influence, has become a great evil in the world.

Western Europe is run by lunatics and “woke” propagandists who are committing economic suicide by outlawing every form of energy that matters. The EU is disintegrating, and the Euro currency likely will collapse within the next year. Western Europe is on a suicide mission, both economically and culturally, as the nations of Europe can’t even protect their own borders from mass migration. (Nor can the USA, for that matter.)

America as you know it will soon cease to exist

Before the end of 2025, as I have publicly predicted for at least the last five years — America as you know it will cease to exist. This has been the plan all along from Barack Obama, Hillary Clinton, Joe Biden and plenty of RINO neocons, too (the Cheneys, Bushes, etc.). They needed to take down America in order to achieve one world government under the fascist United Nations, with universal gun control, universal vaccine mandates, abortion “rights,” engineered global starvation and total control over all speech and elections.

Their agenda is failing at many levels, however. Roe vs. Wade was just struck down by the US Supreme Court, for example, and there are elements at work that are looking likely to achieve key indictments against deep state players. However, any state that wants to exist after the dollar collapses must be ready to roll out its own gold-backed currency on an emergency basis. Texas is largely prepared to do this, but few other states are ready. The re-establishment of trade and commerce (following the dollar collapse) is going to be the key to surviving the demise of the dollar.

Texas is America’s No. 1 exporter of goods, by the way, and the Texas economy is larger than most nations on the planet. So is the economy of California. But California is run by child murdering, demonic fascists while Texas has the world’s best Attorney General (Paxton) and a strong contingent of pro-human, pro-liberty, pro-Constitution Americans who are ready and willing to relaunch the spirit of America in the new Republic of Texas, when necessary. #TEXIT

But no matter what happens domestically, America’s days of being able to run around the world, threatening everybody with military strikes and dollar weaponization will soon be over. And without the ability to print money and defraud the world into buying soon-to-be-worthless US debt instruments, the United States military will have no funding to continue operations or build new weapons. It will eventually be disbanded.

What happened to the former Soviet Union in 1991 is about to happen to the United States of America: A collapse of the ability to continue to fund the bureaucracy and military that propped up the system the entire time. The USA has sadly devolved into an empire of debt, lies and death. The country is currently ruled by an actual death cult, but those days are fast coming to an end with the imminent collapse of the demonic dollar and all the evil that money printing has enabled since 1971.

When this evil is finally brought to an end, all those who value life, liberty and happiness will rejoice (and rebuild).

Get prepared, for that today is coming soon. And from what I’ve concluded, the only way to avoid the financial collapse that’s coming is to hold your assets in physical goods such as gold and silver, land, agricultural equipment, ammunition, industrial buildings (factories, for example) and other “real” things that don’t vanish in a currency collapse.