USA: The federal government along with the World Health Organization and the United Nations continue to lie to the world about COVID-19, its true fallout, and what it has to do with a new alleged outbreak of so-called “monkeypox” — or whatever politically correct name the UN chooses for it.

The outbreak just conveniently happens to come as COVID cases in the U.S. and around the world have dramatically receded and the vast majority of people have long since moved back to their previous lives, trying to forget the two-year nightmare we’ve just been through when initially the shutdowns were only supposed to be for “two weeks to flatten the curve and slow the spread.”

It also comes amid a meeting of global powers to decide on a unified ‘response’ to the ‘monkeypox’ outbreak — one that all signatory nations will be obliged to legally follow.

But wait, are we really dealing with a new outbreak of an existing disease? Or is this just the latest ill-effect of the coronavirus that was developed by China and paid for by Anthony Fauci?

According to previously published government data, what we’re really looking at is COVID-induced shingles, The Exposé reports.

“According to a scientific study published in 1988, it’s virtually impossible to distinguish between monkeypox and chickenpox. And chickenpox is caused by the varicella-zoster virus, and just like its close relative the herpes simplex virus, it becomes a lifelong resident in the body,” said the report.

“And like its other cousin, genital herpes, varicella may be silent for many years, hiding out inside nerve cells and can reactivate later, wreaking havoc in the form of the excruciating skin disorder, shingles, which is a blistering, burning skin rash,” The Exposé adds.

New data made available by the U.S. Government, but more specifically the Centers for Disease Control (CDC), very strongly suggests that what is occurring is not an outbreak of monkeypox but rather an outbreak of coronavirus-induced shingles that has become the latest government cover-up.

Per the CDC Wonder Vaccine Adverse Event Reporting System (VAERS) database, as of June 3, 2022, the federal health agency has seen 18,026 reports that relate to shingles and herpes infections that have occurred as a result of reactions to multiple COVID-19 vaccines:

And the vast majority of these reports have been a result of the mRNA Covid-19 injections by Moderna and Pfizer. The Janssen viral vector vaccine has had just 693 reports of herpes/shingles infections made against it. Whilst the Moderna vaccine has had 5,321, and the Pfizer jab a shocking 12,507.

Meanwhile, according to the same VAERS database, the CDC only received 1,052 reports relating to herpes/shingle infections that have occurred as adverse reactions to all available Flu jabs between the years 2008 and 2020.

The figure below indicates a 1,614 percent increase in adverse cases in relation to herpes and shingles due to the coronavirus vaccines, though it’s not clear which vaccine maker is most responsible. 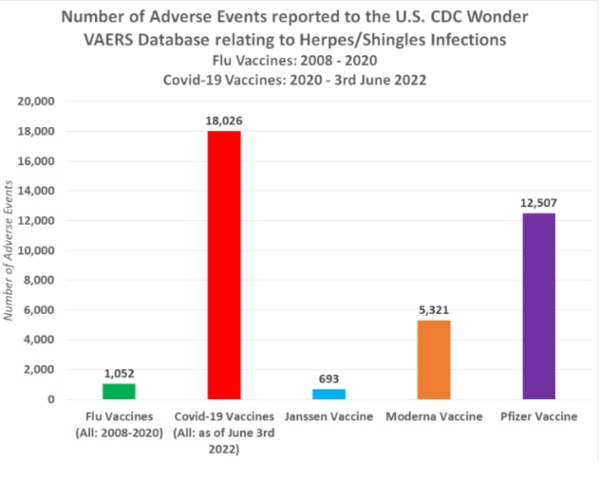 Some may try to argue that this increase is only because there were so many COVID-19 vaccines administered for more than a year. But that’s incorrect because official CDC data shows that nearly three times as many flu shots were given between 2008 and 2020 than COVID-19 jabs administered as of June 3. According to the CDC, some 1.7 billion flu shots were given between that time frame. 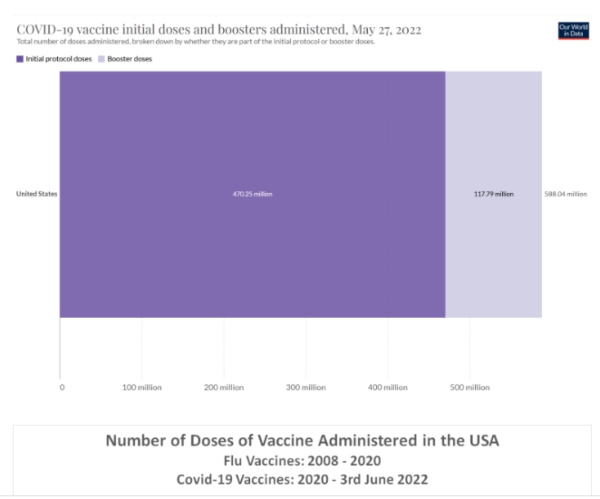 “Therefore, this official U.S. Government data proves that Covid-19 vaccination increases a person’s risk of developing Shingles by 4,925% at the very least,” The Exposé noted further, after summarizing all of the available data.

Our government cannot be trusted to tell us the truth anymore about anything.