We forwarded Ms. Hynes a link to our March editorial pleading with people to stop posting their “vaccine” stories to social media, since you relinquish any and all claims to privacy thereafter.

I’ll still be the bigger person here and keep her GoFundMe link in the article, as I do genuinely feel sorry for Ms. Hynes. She made both her Instagram and Twitter pages private last week. Here is her email to us in full. 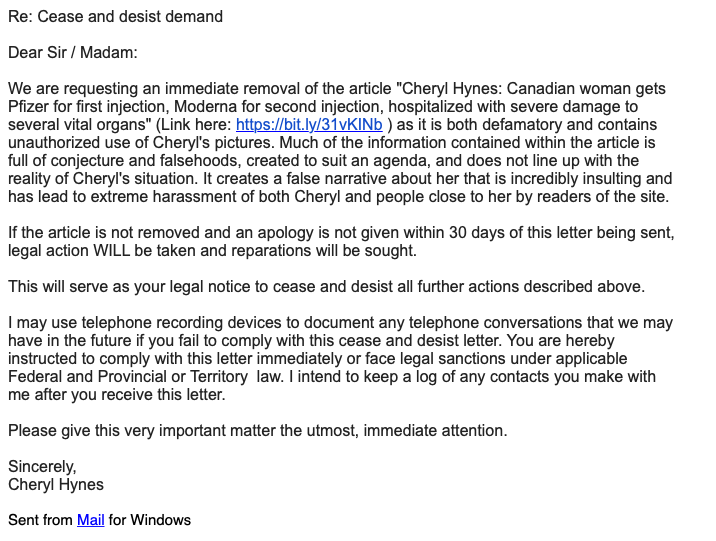 Of course we’ll continue exercising our rights to free press and simply reporting people’s own words about their post-injection injuries. We also hope this woman somehow finds peace.

OTTAWA, ONTARIO — A 54-year-old Canadian leasing agent and mother of two is facing a bleak future in a very sad case of virtue signaling, denial and extreme social media addiction.

Ms. Cheryl Harnett Hynes received her first Pfizer mRNA injection on May 14, according to her Twitter profile. She’s averaged about seven tweets per day since 2009. But Ms. Hynes is well over 25 tweets per day on average in November and most of 2021. That’s in addition to over 5,000 Instagram posts. She also has Facebook and TikTok profiles. Ms. Hynes was so happy to receive the injection that she wrote an impromptu song about it. 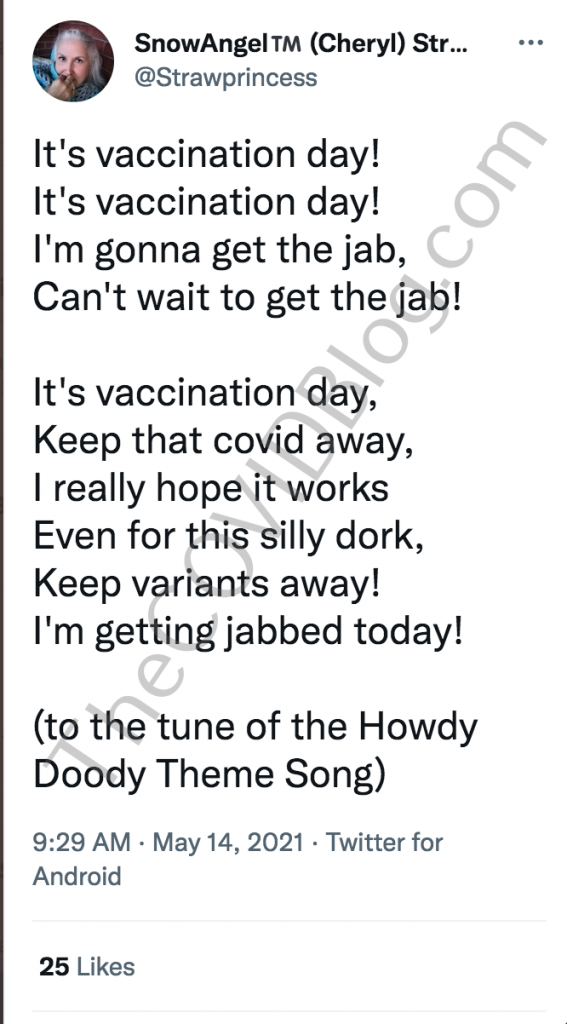 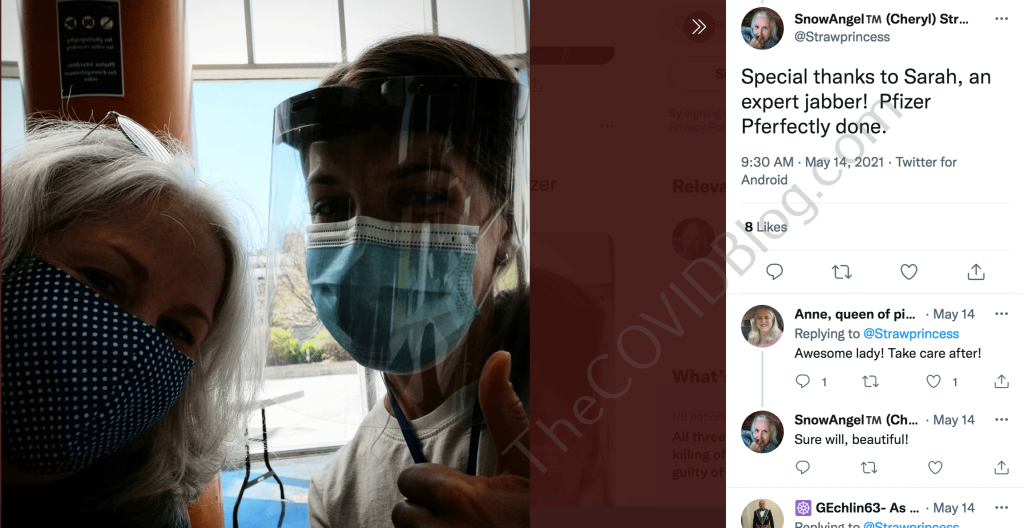 Ms. Hynes, who already had some sort of preexisting kidney condition…

and recent intestinal surgery, was hospitalized on June 13 with kidney and bowel issues. She tweeted every detail, from her “poop” patterns and “farting,” to the food she was eating during her five-day stay. Ms. Hynes also reported three “blown veins,” meaning the healthcare “professionals” screwed up three times trying to insert IVs and other needles. 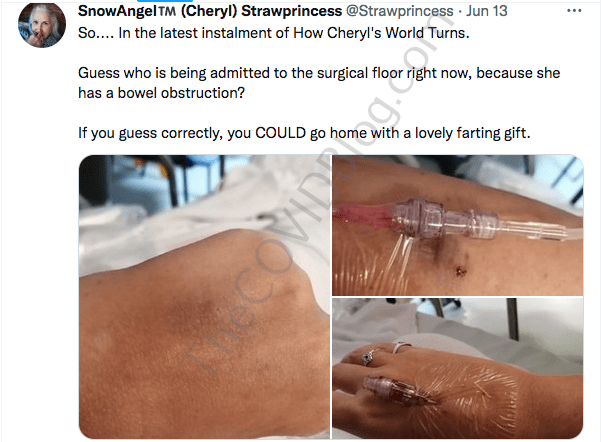 In what can easily be characterized as a sign from God, Ms. Hynes got into a scooter accident on July 11. She suffered a fractured elbow, torn ligaments in her right wrist, had pieces of asphalt lodged in her forehead, and was referred for plastic surgery. 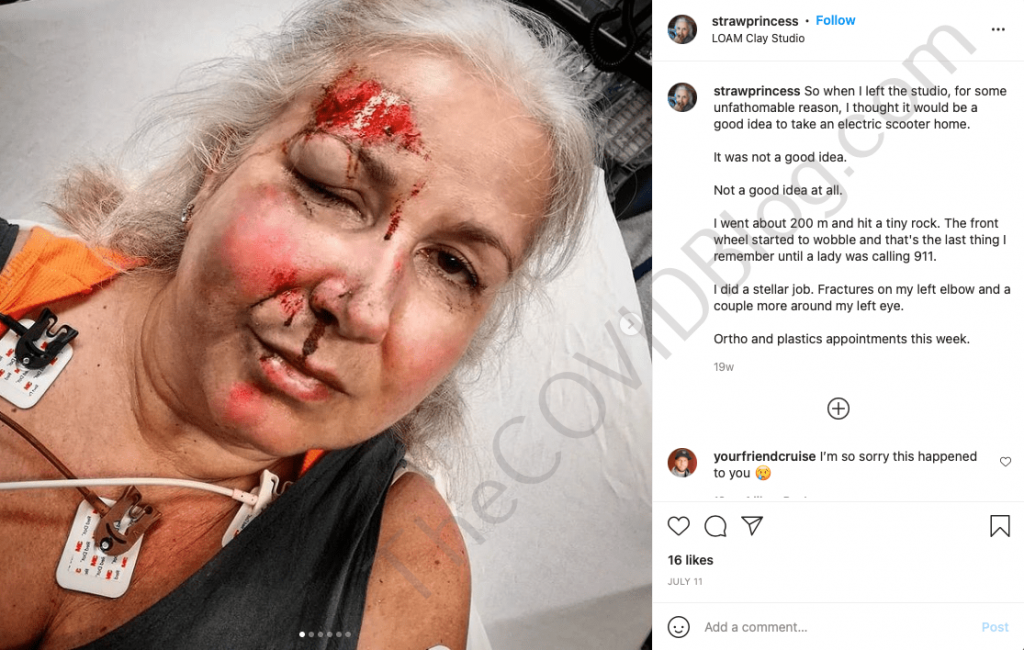 Despite all of the foregoing, Ms. Hynes rushed from the doctor’s office after getting a cast for her fractured elbow, to a “vaccine clinic” on July 16. She received her second mRNA injection, this time Moderna. It’s unclear why she mixed Pfizer and Moderna. But it’s just more proof that there’s no difference between any of these Pepsi and Coke experimental lethal injections. 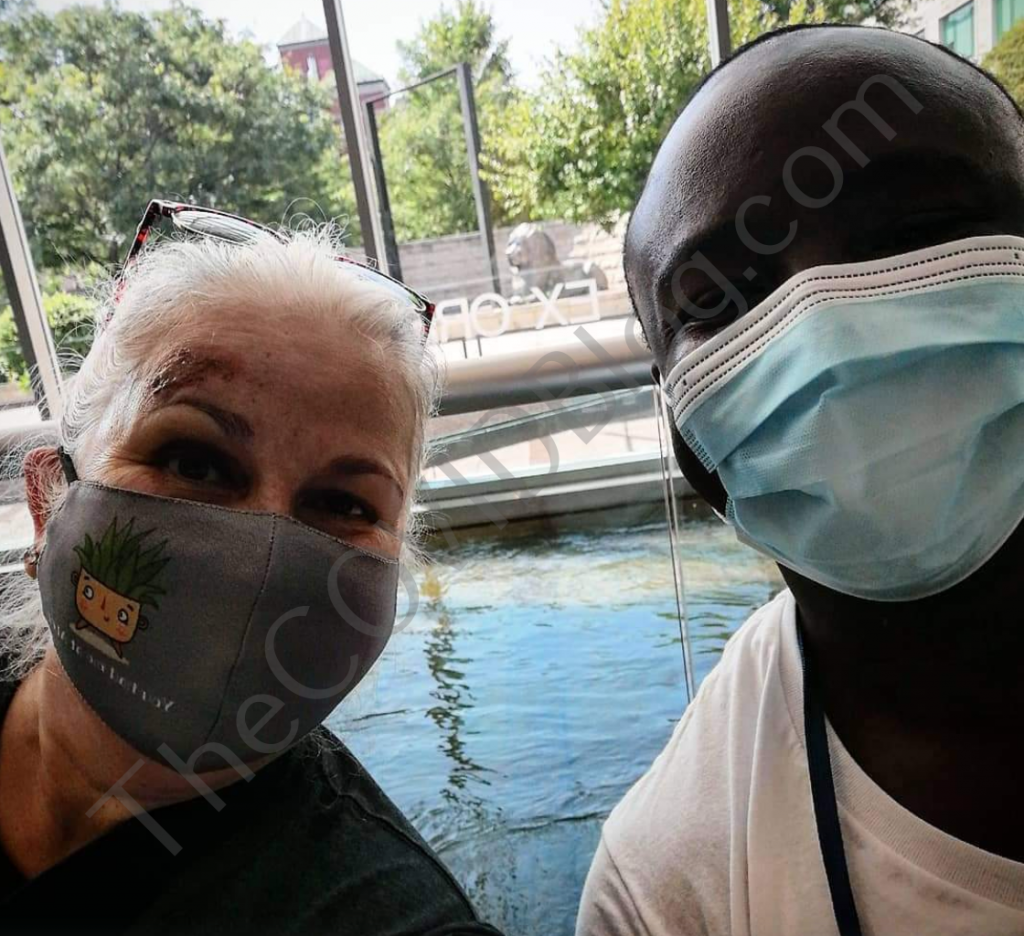 Her life has spiraled downward ever since. By August 4, her doctor indicated that she likely has permanent kidney damage.

More on that in a bit.

Ms. Hynes is the perfect foot soldier for the COVID-19 and “vaccine” agendas. She loyally gets swabbed up her nose despite reporting total discomfort during the experiences. 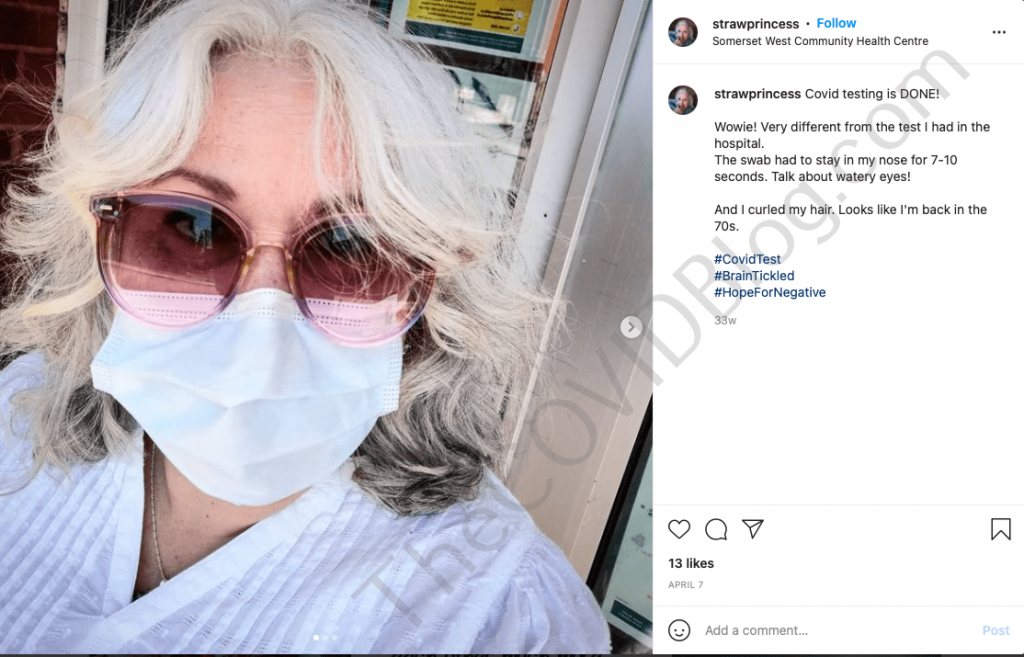 Ms. Hynes absolutely loves wearing masks. She not only virtue signals in public, but literally feels that wearing masks is a fashionable thing to do. 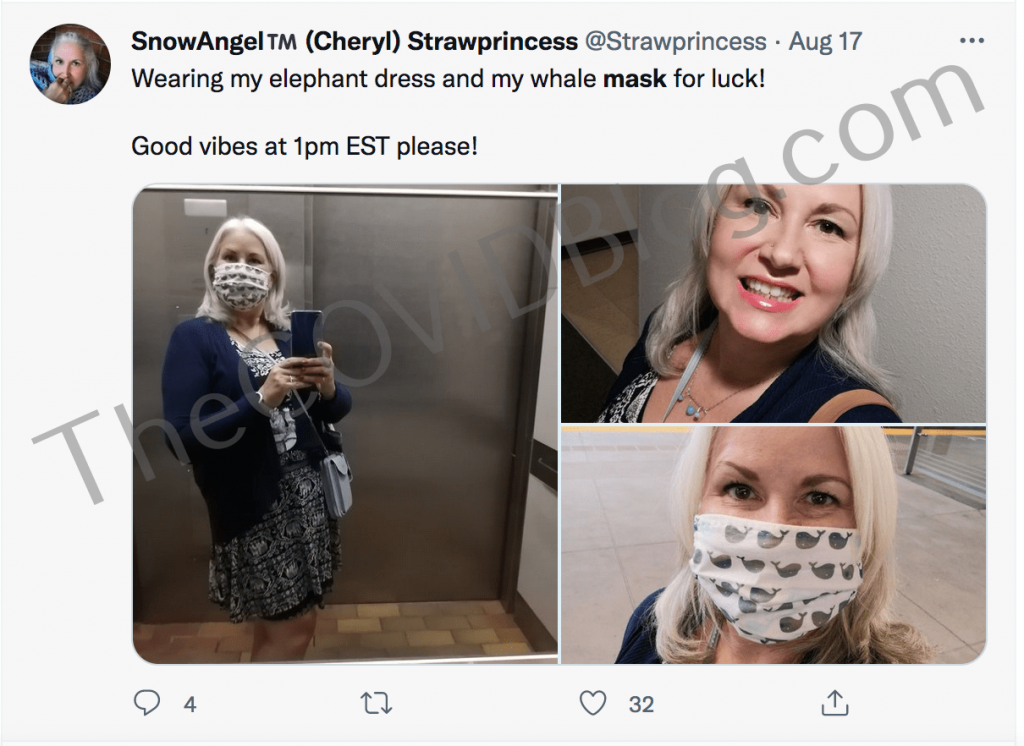 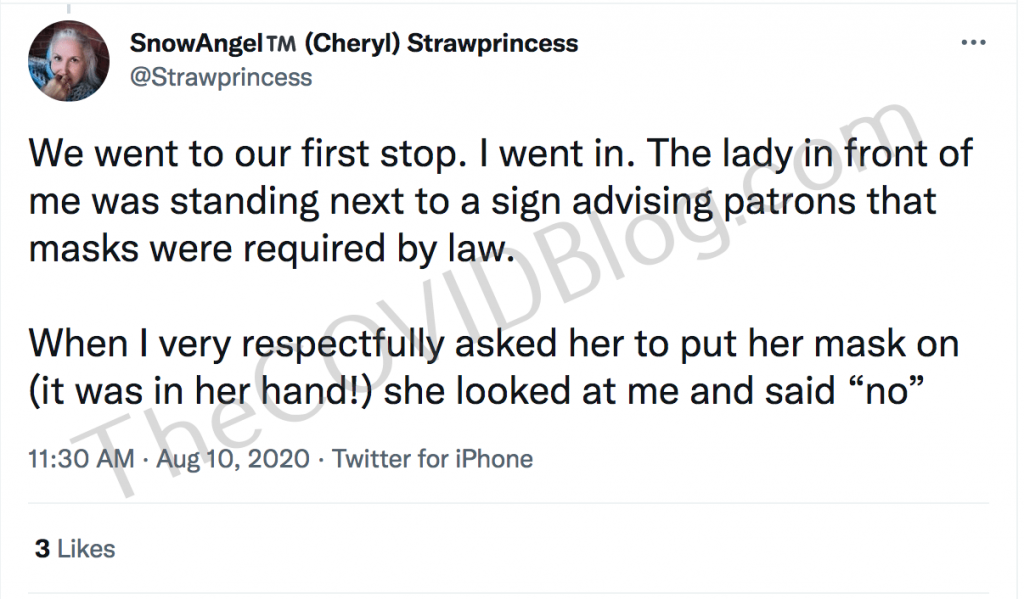 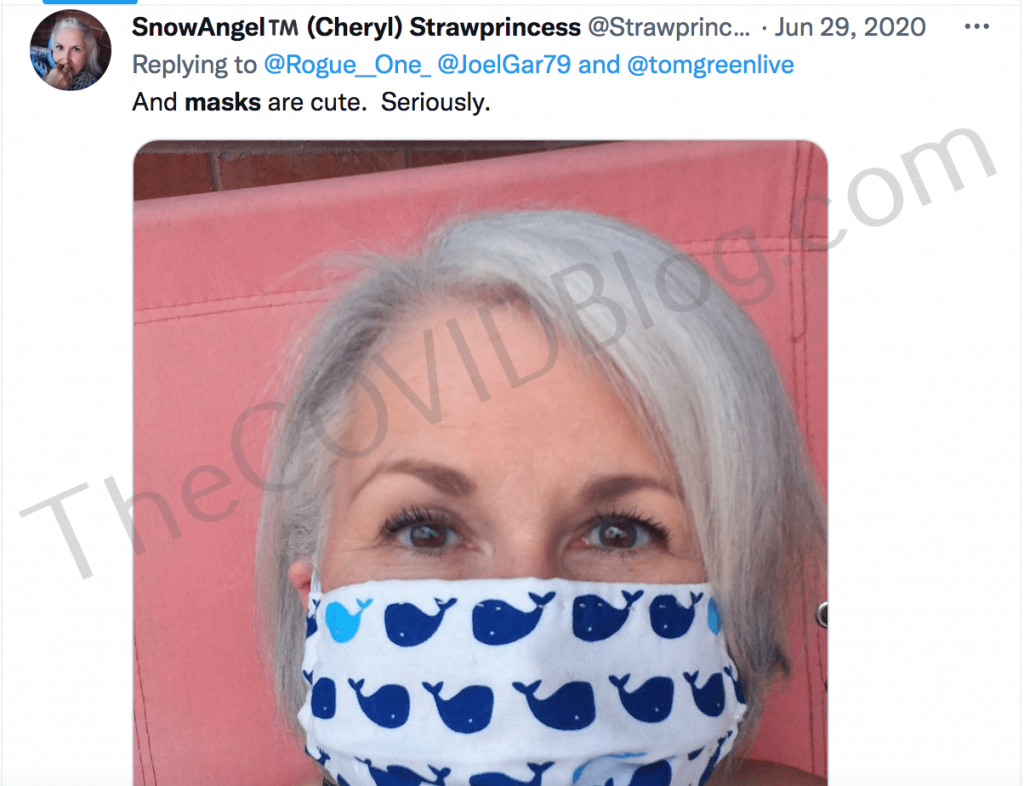 She regularly attacks so-called “anti-vaxxers.” Ms. Hynes believes that anyone who does not adhere to the cult of pseudo-science “should not be allowed to use gravity.” 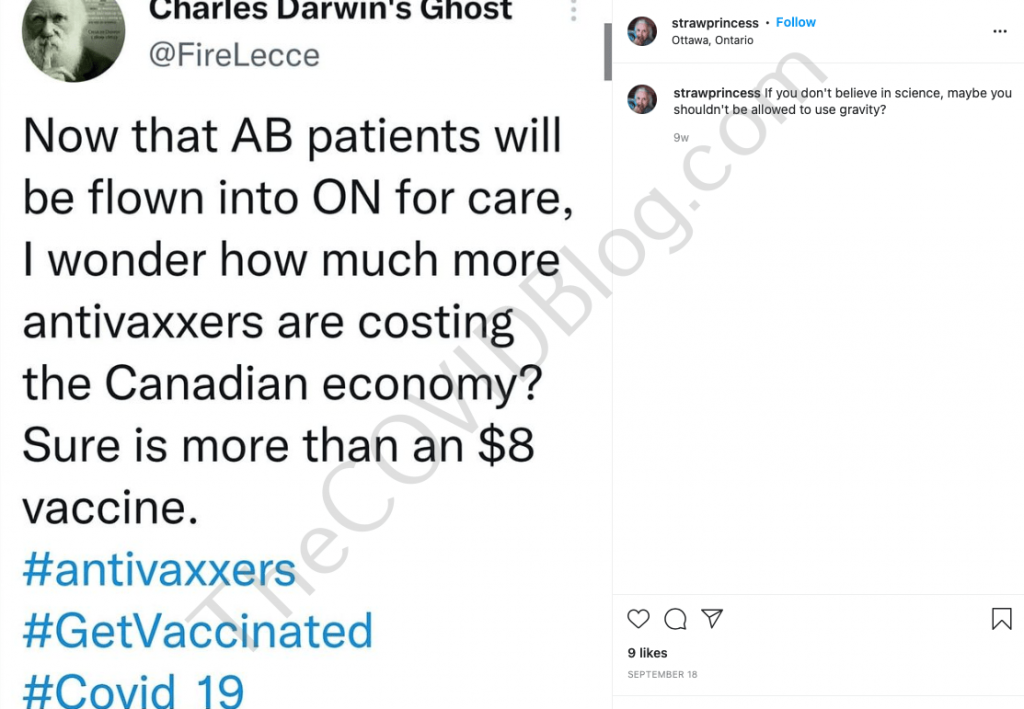 She is twice-divorced, tweets regularly about animosity towards men, and checks all the boxes for vaxx zealots and virtue signalers. 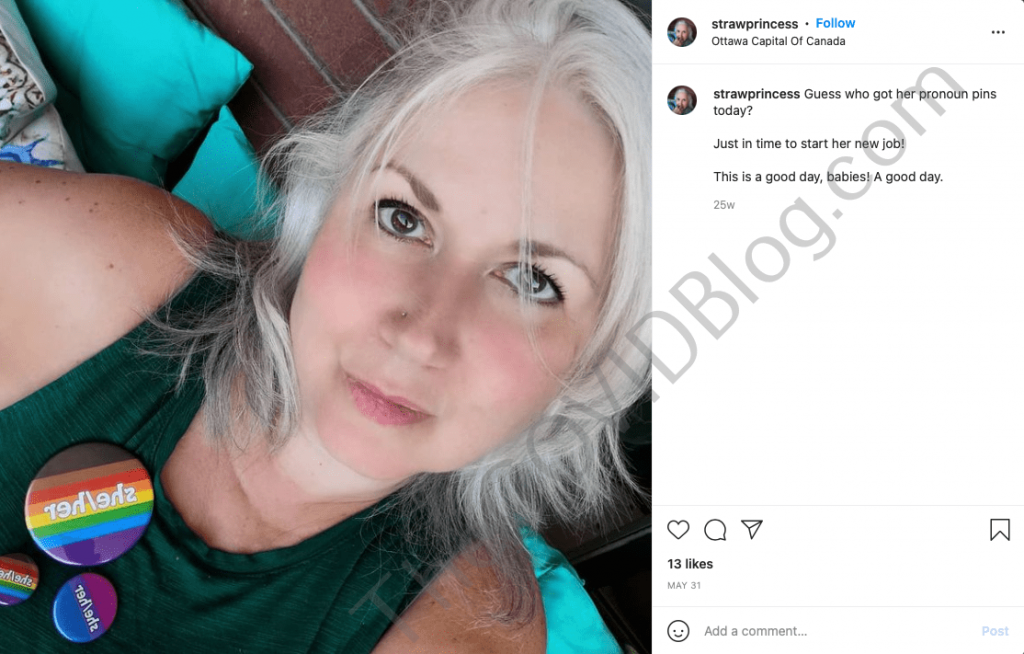 Ms. Hynes was hospitalized again on November 12. She’s been there ever since, with her condition worsening by the hour. She reported that her liver has swelled to three times its normal size. It got so large that it pushed up against one of her lungs, causing it to collapse. 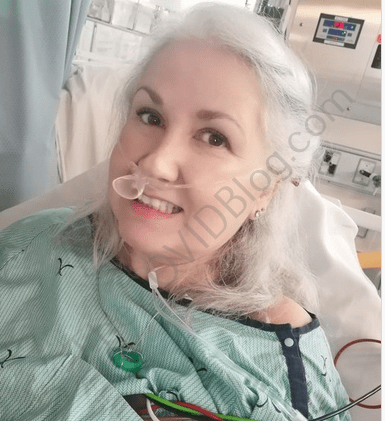 Her ex-sister-in-law voiced concerns on November 15, asking the logical question “when were you vaccinated?” Ms. Hynes tweeted an extremely angry response, calling the question an “idiotic agenda.” She simply cannot or will not bring herself to acknowledge the gigantic pink syringe in the room. It’s a very sad case of severe denial. 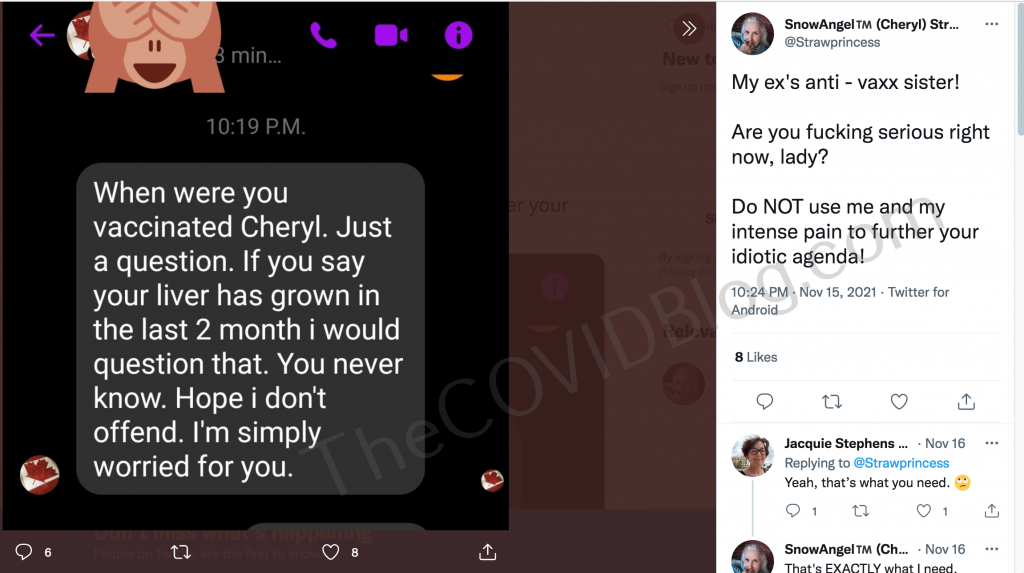 Doctors diagnosed her with hemidiaphragm paralysis due to phrenic nerve damage. In layman’s terms, the cord that sends signals from the brain telling the diaphragm to contract so you can breathe, no longer works. It causes extreme breathing difficulties.

Luckily for Ms. Hynes, so far, only the right side of her diaphragm is affected. But that renders her right lung useless. Thus she now must walk around with an oxygen tank for the foreseeable future. 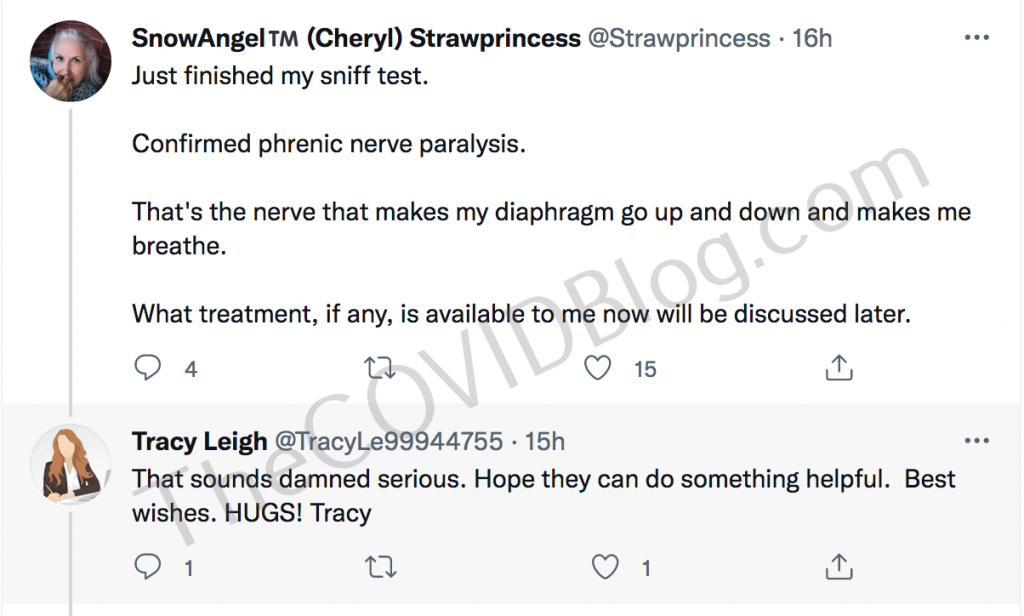 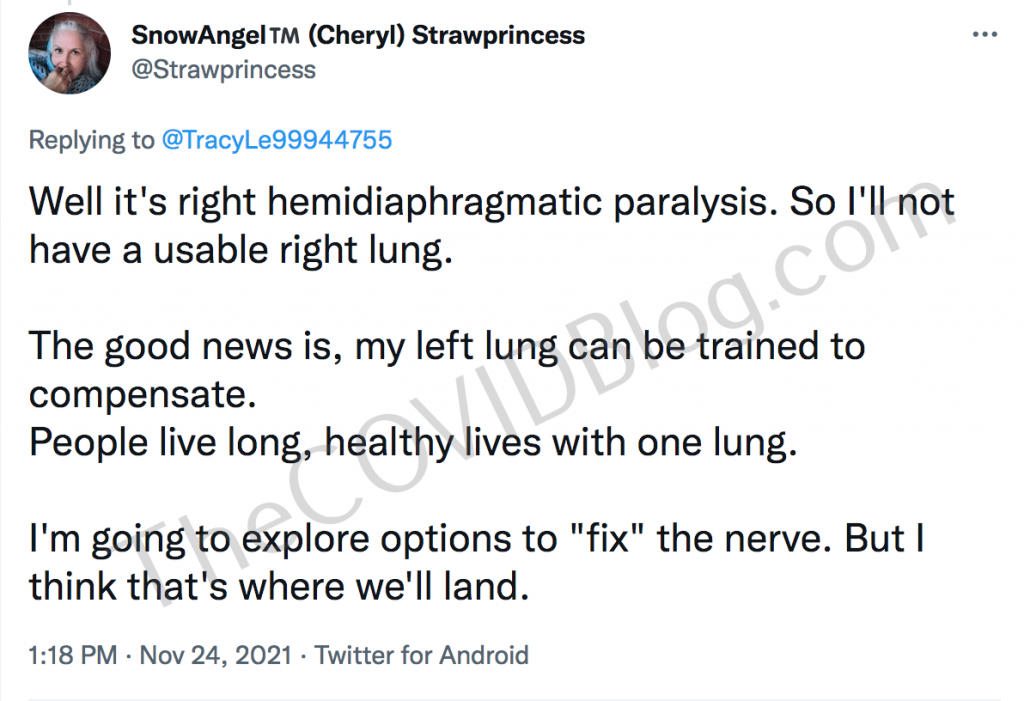 Ms. Hynes joked about the condition, apparently as a way to cope with the new reality.

She had an endoscopy on November 19. That’s when a camera is inserted into your rectum to examine the digestive tract. 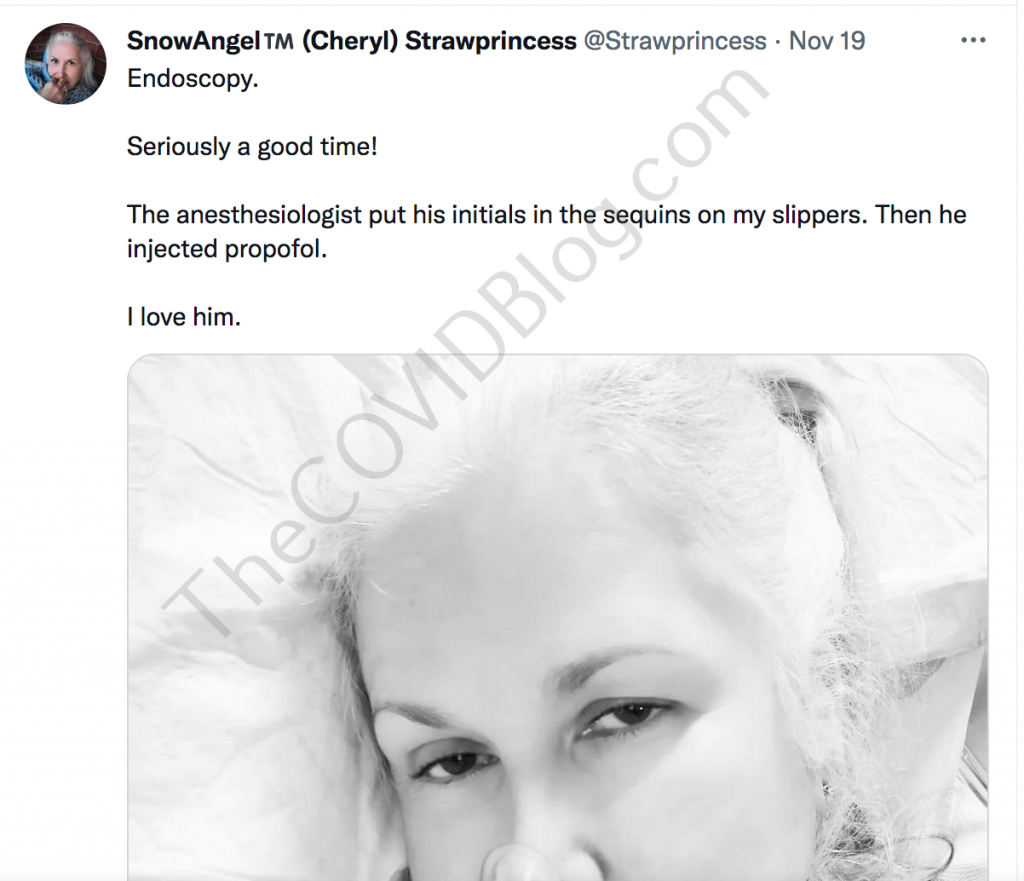 But her latest diagnosis is incredibly disturbing and something that doesn’t even seem humanly possible. Ms. Hynes’ large intestine somehow detached from its normal position, and now runs vertically on the right side of her torso from her abdomen up to her right armpit. She said she can even feel the intestine in her armpit. Despite all of the foregoing, doctors are apparently sending her home today with pain medication and an oxygen tank. 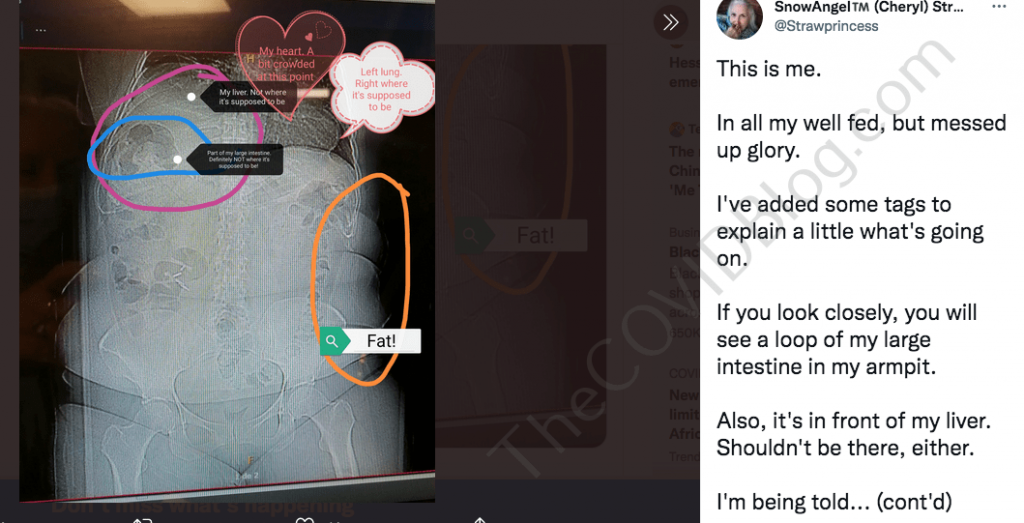 We’ll continue following up on this story.

This story is almost identical to that of Mr. Michael Granata. The 56-year-old California engineer received his first Moderna injection (after being coerced) on August 17. He was diagnosed with multi-system inflammatory syndrome just weeks later. The condition caused all of his internal organs to swell and enlarge to the point that they no longer functioned properly. Mr. Granata died a horrendous death 10 weeks after the injection, and warned others not to get the shots “unless you want to suffer and die.”

The only difference between these cases is that Mr. Granata and his surviving family are heroically warning others about the obvious dangers of these lethal injections. Ms. Hynes is a virtue signaler and a microcosm of everything wrong with 2021. She implied on her GoFundMe page that the right side of her chest is now slowly filling with urine or solid waste. Doctors told her all of this is her new normal. Ms. Hynes ended the GoFundMe update with “I’m scared, I’m really scared. I need help.”

We usually do not link the GoFundMe pages of virtue signalers. But for some reason this blogger feels particularly sorry for this woman. She is so incredibly indoctrinated and is seemingly incapable of rational thought related to the bad decision that changed her life. But at least she’s going out with a smile and accepting the principle of caveat emptor. Godspeed.

Stay vigilant and protect your friends and loved ones.