USA: The DMED database shows the rate of cancer is up by 3X after the COVID vaccines rolled out. See ACT OF WAR: Thanks to COVID “vaccines,” the military’s cancer rate has more than TRIPLED

In talking with Ryan Cole about this, he believes this is primarily due to accelerating existing cancers (ones people already know they have or recent cancers that people never realized were there) rather than creating new cases of cancer.

Watch this video for more insight.

“You cannot find that for which you do not look."

Dr. Ryan Cole says he's seen a number of disturbing trends recently: the appearance of a childhood disease in adults & an uptick in rare cancers.

But no rigorous research is being done.

Consider these two emails I received on February 5, 2022 which are representative of comments I see all the time:

I watched the Second Opinion and was wondering if you found any information on something that was talked about. The topic I am interested in is the untranslated human genes added to the MRNA vaccines that were being discussed as possibly adversely affecting how the immune system goes after cancer cells–in order to reduce the inflammatory response to the vaccine. I have seen several articles published with case studies of specific patients who had a massive progression of their cancer post vaccine.

I know two people personally who now have a cancer that’s pretty serious… I was talking to my doc yesterday and she said one of her patients was diagnosed on Monday and dead by Thursday last week.. she had no previous cancer… 2XV@

And these tweets suggest the vaccines can create new cancers: 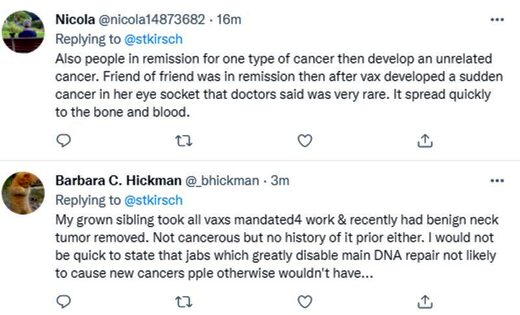 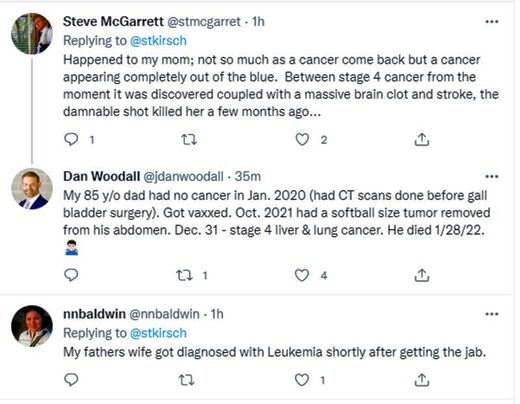 The bottom line is that don’t be surprised when after the jab, you suddenly have a relapse or a new cancer.

If you’ve recently been vaccinated and your previously under control cancer is now out-of-control, it is highly likely that the cause is that “safe and effective” vaccine you took.