Abbott, who has called for a special legislative session, followed by tweeting, “The last time a stunt like this happened was… …Wendy Davis. We all know how that story ended.” 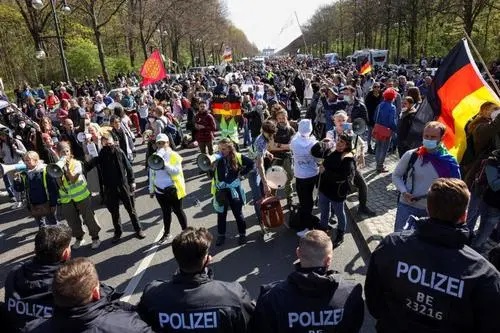 A woman wearing a protective face mask reading ”dictatorship” protests against government restrictions, although the rally has been disallowed by a regional court, amid the CCP virus disease (COVID-19) outbreak, in Bremen, Germany, on Dec. 5, 2020. (Fabian Bimmer/Reuters)

On April 8, the Weimar District Court banned two schools in that district from enforcing mask mandates, social distancing requirements, and rapid COVID-19 testing on their students. The court also ordered the schools to no longer conduct distance learning.

The decision followed a legal action by the mother of two students, aged 8 and 14 respectively, at one of the schools, who argued that such measures were causing physical, psychological, and pedagogical harm to her children, as well as constituting an infringement of her children and parental rights under German and international law.

The judge, Christian Dettmar, upheld this argument (pdf), noting that mask mandates and social distancing requirements for children, were not only causing the harm mentioned above, but were in direct violation of Articles 2 and 6 of the German Constitution, which guarantee the rights to freedom of individual development, education, and parental assistance.

Members of the police stand guard as people protest against the government measures to curb the spread of the coronavirus disease (COVID-19), as the lower house of parliament Bundestag discusses amendments to the Infection Protection Act, in Berlin, Germany, on April 21, 2021. (Christian Mang/Reuters)

Accordingly, the judge held that the anti-COVID measures deployed were not proportional to the threat posed. This was in accordance with proportionality principles enshrined in Articles 20 and 28 of the German Constitution.

The court also referred to an October 2020 WHO Bulletin which featured a study by renowned medical science expert John Ioannidis, who found the death rate for coronavirus was 0.23 percent, the equivalent of a moderate influenza epidemic.

In examining expert medical, scientific (including biological) and psychological evidence, the judge found the use of masks and social distancing had no effect whatsoever on reducing infection, and cast serious doubt on the ability of asymptomatic persons—particularly children—to spread the virus. This was the first time evidence was presented to a German court regarding the scientific reasonableness and necessity of the prescribed anti-virus measures.

Judge Dettmar found that the anti-virus measures posed a danger to the mental, physical or psychological well-being of the children to such an extent that significant harm could be foreseen with a high degree of certainty. He wrote:

“The children are not only endangered in their mental, physical, and spiritual well-being by the obligation to wear face masks during school hours and to keep their distance from each other and from other persons, but, in addition, they are already being harmed. At the same time, this violates numerous rights of the children and their parents under the law, the constitution, and international conventions.

The judge agreed with the experts’ assessment that masks were not useful for viral protection, that PCR tests could not detect a disease-causing infection with necessary certainty, and that asymptomatic transmission played no detectable role epidemiologically with respect to coronavirus.

On the contrary, masks would have a negative impact on children’s health due to handling-related contamination. Testing in school classes would be unnecessary, harmful and also extremely problematic in terms of data protection.

In conclusion, he stated, “100,000 elementary school students would have to put up with all the side effects of wearing masks for a week in order to prevent just one infection per week. To call this result merely disproportionate would be a wholly inadequate description. Rather, it shows that the state legislature regulating this area has fallen into a factual disconnect that has reached historic proportions.”

Following this sensational decision, Judge Dettmar had his house, office, and car searched by police, and mobile phone confiscated.

The Weimar Administrative Court—a separate court with no jurisdiction over the District Court—issued a statement in response describing Dettmar’s decision as unlawful (without giving reasons), and reiterated the importance of the mask mandate.

Do the actions of the police, court, and authorities suggest that the edifice of virus restrictions could be exposed as lacking proper epidemiological foundations?

More Than 1,000 Earthquakes In The Past Week – Is California Gearing Up For The “Big One”?