54 Dead, 105 Injured After Tractor-Trailer Of Migrants Headed To US Crashes In Mexico

Update (0937ET): New reports indicate at least 54 people were killed and 105 injured after a horrific truck accident in southern Mexico on Thursday. The accident occurred in the Chiapas State when a tractor-trailer carrying more than 100 migrants from Central America crashed into a bridge.

NYTimes reports the accident is the deadliest involving migrants in decades. 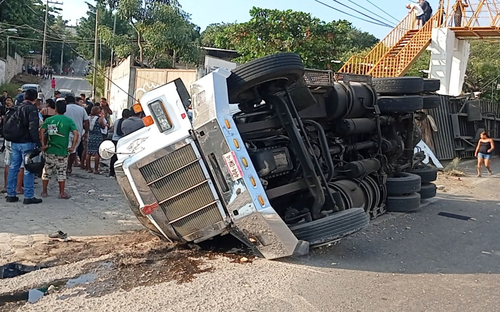 On Thursday afternoon, a tractor-trailer carrying more than 100 Central American migrants crashed into a bridge over a highway in southern Mexico, killing 54 people.

Luis Manuel García Moreno, head of civil protection in Chiapas, said the truck was carrying 107 people when it crashed. He said 53 died on impact, and 40 were injured and taken to regional hospitals.

“According to survivors, the majority appeared to be citizens of Guatemala,” Morena said in a television interview with Foro TV.

At least 53 dead and more than 50 injured when a truck carrying illegal immigrants bound for the US overturned in Chiapas Mexico#Chiapas #IlegalInmigrants pic.twitter.com/ygFLPtolth

Central American migrants travel in caravans and are often hidden in tractor-trailers like the one that crashed to avoid Mexico’s National Guard and immigration authorities as they head north to the US border. Smugglers charge migrants upwards of $10k for the journey.

The migrant caravan was presumably headed to the US border. The US has recorded historic numbers of border crossings and arrests this year as the Biden administration fails to secure the border. In 2021, the US Border Patrol agents arrested 1.7 million illegal immigrants — the second-highest total ever.

Republican lawmakers have continuously called the chaos on the Mexico-US border and waves of migrant caravans headed to the US the fault of the Biden administration.

The Biden administration has welcomed undocumented migrants arrested at the border and disturbed them to shelters across the US.

If it weren’t for the Biden administration’s relaxed border policies — maybe waves of caravans would avoid making the journey, and possibly the accident on Thursday could’ve been avoided.